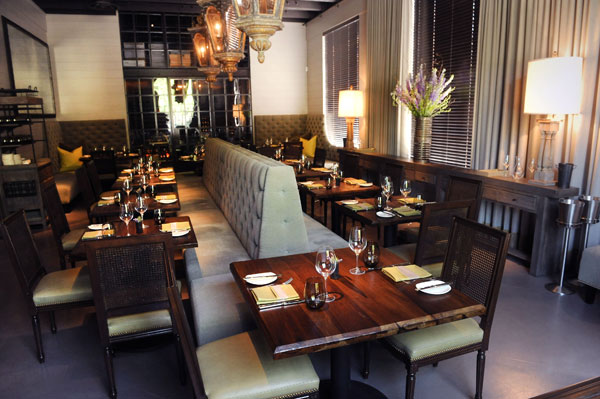 Tomorrow's print edition is devoted to our annual "Best of Austin" issue, so we're dishing up the latest Austin food news a day early.

• Ham lovers all over town will be pleased to note that the Texas Honey Ham Company (3736 Bee Caves) has finally reopened after an arson in early March. The well-loved breakfast and lunch spot for nearby Westlake High School students is once again serving spiral-cut hams, over-stuffed sandwiches, and exemplary breakfast tacos. “It's been amazing, crazy busy, so great to see everybody come back,” says co-owner Robert Siller, who is excited to show his retuning clientele the upgrades to the store's interiors. “They never caught the guy who did it, but we're not focusing on the past. We're just concentrating on going forward.”

• The Las Vegas-based bakery franchise Nothing Bundt Cakes (10225 Research, #330) celebrates the grand opening of a new outlet in the Great Hills Station center this weekend. The store is operated by local owners Caitlin and Leif Johnson and offers a wide selection of traditional bundt cakes in various flavors and sizes.

• Contigo (2027 Anchor) has launched Contigo Catering with event planning by Brooke Greer. Many of the restaurant's popular menu items will be available as well as whole pig roasts and custom carving stations for large cuts of meat or their distinctive house-made charcuterie. They will also offer full bar service, rentals, and decorations.

•The Noble Sandwich Co. (12233 RR 620 North; 4805 Burnet) is also expanding their catering services with customized, from-scratch menus for weddings, parties, corporate breakfasts, and lunches that are accessible via their new catering site.

• laV (1501 E. Seventh) has added a three-course prix fixe Sunday supper ($40) with a limited number of options chosen from the regular menu or a chef's tasting menu from chef Allison Jenkins. Seatings can be scheduled between 6-9pm.

• The Alamo Drafthouse brings the “draft” in their name to the forefront with the launch of a new beer spotlight program focusing on a different style of beer each month, with special tap and bottle selections from local craft breweries as well as beer-centric events at all Alamo and Glass Half Full locations. Look for Oktobertfest or Marzen-style beers in September. “We're looking to the beer geeks on our staff to really highlight different styles for our guests,” said beverage director Bill Norris in a press release.”Stay tuned for some cool stuff we've got up our sleeves going forward, too.”

• There's a traffic nightmare in store for folks who frequent the block of MLK from Whitis to Guadalupe. The Daily Texan has reported that both Players and Schlotzsky's have been notified that they must be closed by November to make way for the expansion of UT's McCombs School of Business. Both restaurants currently have parking lots and drive-thru lanes which are not likely to be replaceable in the campus area, so we don't look for them to relocate in the neighborhood. Players has been an all night campus area mainstay for years, while the busy Schlotzky's outlet sits on the former site of one of Harry Akin's beloved NightHawk restaurant locations.

• Real estate ownership can be destiny in the restaurant business. Enthusiastic petitions to reconsider notwithstanding, JP's Java (2803 San Jacinto) business and property owner JP Hogan has gotten an offer he can't refuse to sell his piece of prime campus-area real estate. The deal is scheduled to close on Oct. 3. The only way the beloved JP's stays open is if the sale deal falls through, which Hogan doesn't anticipate. When we asked Hogan if he planned to relocate in the area, he said "Not initially. Maybe after the dust settles, we might look into it." Sounds as though students of law and engineering will have to find somewhere else to congregate and caffeinate.