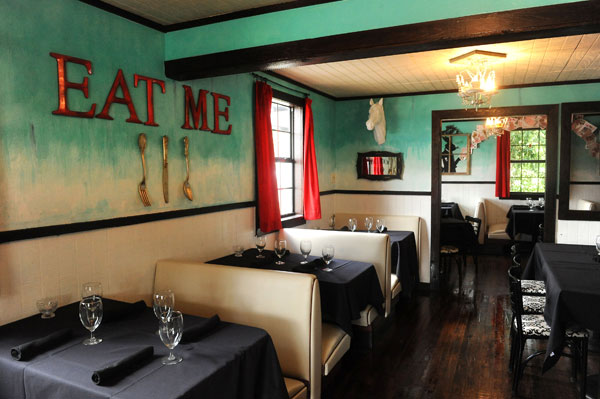 Chef Rob Snow has added a touch of fantasy to Round Rock’s Main Street with the opening of his new bistro the Scarlet Rabbit in July. The family-friendly joint is brimming with Wonderland decor, from the teacup chandeliers to the false doors lining the entrance wall, but the cuisine is all Texas.

The Scarlet Rabbit is Snow’s second venture in Round Rock; his farm-to-table Greenhouse Craft Food opened just a few miles away last October. Snow began his culinary career at the Palazzo in Las Vegas before making his way to Austin, where he got his butchering chops at Fleming’s before refining his skills at the Vintage Villas event center in Lake Travis and eventually becoming executive chef at the Mansion at Judge’s Hill. There, he found his culinary calling.

“When I was at the Mansion, I kind of built my menu around Texas cuisine, and that’s just what I like and what I want to be known for,” Snow said.

When Snow opened Greenhouse Craft Food, his priority was to create a friendly neighborhood joint that offered a clean, locally sourced menu. When he found the space for the Scarlet Rabbit and teamed up with Quality Seafood’s Rich Taylor, Snow was ready to fulfill his fantasy and serve his specialty. The White Rabbit is not just a character in Lewis Carroll’s Alice's Adventures in Wonderland – it's also the star of the bistro’s smoked rabbit gumbo with andouille sausage. Other popular dinner items include the oyster nachos, with fried oysters on blue corn tortilla chips and dressed with a chipotle aioli, and the quail flatbread with poblano cream sauce. All dishes draw flavors common throughout Texas, including Cajun, Southwestern, Mexican, and German. 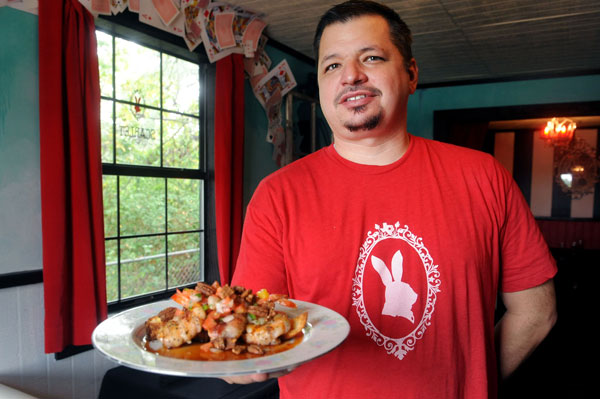 “I grew up here and I always thought the food culture was really cool even before it was really cool,” Snow said. “You can go to Fredericksburg and have an authentic German meal, which as a kid, it can blow your mind. It’s all Texas-influenced but in an Alice in Wonderland setting.”

While Snow and Taylor take charge in the kitchen, Snow’s wife Sonja Snow is responsible for the restaurant’s whimsical ambience. The imaginative designer transformed the 1940s bungalow into a tribute to all things Wonderland, drawing inspiration from the books and related films throughout the years. Quotes written on the walls are not from the 1865 novel, but rather the lyrics of the Jefferson Airplane song “White Rabbit.” Although the restaurant’s theme is clear, Rich Snow would not describe it as a themed restaurant where concept overwhelms.

“It’s not all about the concept, it’s about having something interesting around you while you’re enjoying food and drinks,” he said.

Snow looks forward to cooler months so that more can come enjoy the Scarlet Rabbit’s patio, where picnic tables are shaded under a giant oak tree ornamented by lights and hanging window panes. Adults can get spirited at the outdoor bar, which offers five taps and bottled beers, a selection of wine and cocktails like the Scarlet Pimm’s Cup and Mad Hatter’s Tea (absinthe and a sugar cube served in a tea cup). Acoustic acts are already taking to the outdoor stage, and Snow is working on getting the permits to have psych rock acts come and take guests further down the Scarlet Rabbit hole. 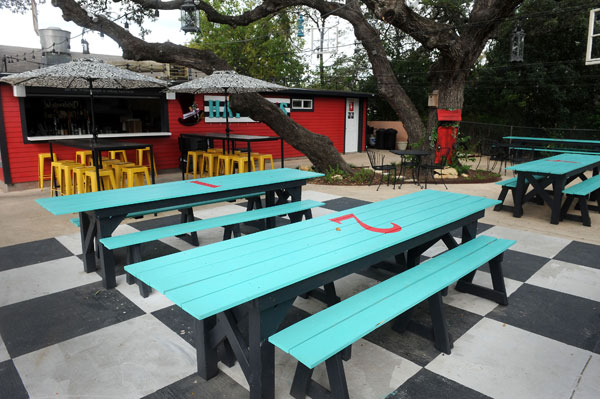