September issues of Bon Appétit and Taste of the South came out over the weekend and recognition for representatives of the Austin food scene figured prominently in both. 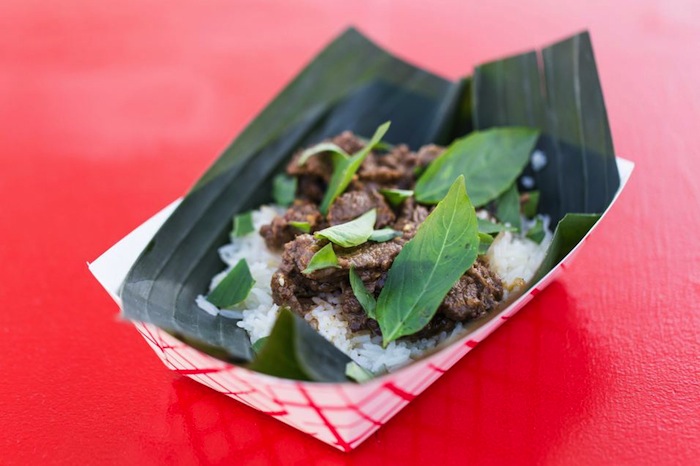 Bon Appétit restaurant critic Andrew Knowlton caused quite a stir by placing an Austin food truck as #8 on the list of the magazine's Top Ten New Restaurants of 2014. Chef Thai Changthoung's Thai-Kun truck is the newest venture of the mighty East Side King operation, serving up hot and spicy renditions of Thai street food in the backyard at the Wonderland bar (1104 E. Sixth, Tuesday-Saturday, 5pm-1am. Though Knowlton claims to be skeptical of the whole food truck revolution, he was knocked out by Thai-Kun's entire eight-item menu, which he pointed out can be purchased for only $56. He rhapsodized that Thai-Kun is serving "the most fiery, addictive Thai food in all the land!"

Taste of the South's early fall issue touts the best pecan pies in the South, and two Central Texas bakers made the list. Though her Heath Toffee Pecan made Cutie Pie Wagon owner Jaynie Buckingham a Crisco National Pie Champion in 2013, tasters from the magazine went wild for her distinctive Peachy Pecan pie. The Austin pie queen is now selling pies from the bright pink Cutie Pie Wagon (24th & Nueces) Tuesdays-Sundays, 4-10pm; at the new SLAB BBQ (9012 Research); the Barton Creek Farmers' Market on Saturdays from 9am-1pm; and the Mueller Farmers' Market on Sundays from 10am-2pm.

Though it's not in Austin proper, Royers Round Top Cafe (105 Main in Round Top) is a popular dining destination for Austinites. Royers also made the list with their much-loved pecan pie based on a recipe shared by longtime Houston Chronicle food editor Ann Criswell. Ann's pecan pie has been a mainstay at the tiny original cafe and the even tinier first Royers Pie Haven (90 Henkel Circle in Round Top) for years. Locals can now order slices or whole pies at the wildly popular Royers Pie Haven (2900 Guadalupe) a few blocks north of the UT campus, daily from 10am-8pm. This pie ships well and is a big favorite among customers of Royers mail order business.

Bon Appetit Top 50 New Restaurants 2013
Out of 6 Texas restaurants on the list, 3 are from Austin