Olamaie is named for four generations of women in Fojtasek's family, and archival photos of the ladies grace one of the walls. As a tribute to those Southern matriarchs, the chefs describe the food at Olamaie as modern Southern cuisine, inspired by the culinary traditions and ingredients of the American South. "When I left Austin, it was to broaden my training so I could come back here and do this. Then Grae and I worked together in Los Angeles and realized we wanted to do the same kind of thing, so he came on board and we headed back here," Fojtasek explains.

Arriving back in Austin in 2013, the fellow Culinary Institute of America grads found the perfect location for their concept – an 84-year-old cottage in the Judges Hill neighborhood between Downtown and the UT campus. The house has been home to more than one restaurant in the past 20 years and was the original location of Oat Willie's head shop in the Seventies.

Just about everyone who follows news of Austin's hot restaurant scene knows what happened next. Fojtasek hired the respected Dallas Stafflebach architecture and design firm to manager the project and the chefs set out to host a series of pop-up dinners to introduce their concept to potential diners. The pop-ups were very well received, generating great buzz for the upcoming restaurant. However, the project got mired in the waking nightmare known as the City of Austin permit process for a little over seven months before construction could even begin.

"I don't blame the people who work in the permit departments, they're obviously overworked and understaffed, but there's just got to be a better way," Fojtasek says. "Our architect told me his firm permitted four complete floors of a commercial development in Dallas in eight days! Eight days versus seven months – that's some discrepancy."

The permit delay drama is all behind them now. The chefs and their well-chosen team of hospitality professionals are comfortably ensconced in the tastefully lovely Olamaie. The interiors are done in muted shades of grey with black accent pieces and the walls are decorated with photos and paintings created by the owner's friends. The small house now has an open, airy feel, and they've added a comfortable, Southern-style patio where guests can enjoy cocktails. In addition to the framed photos of the namesake matriarchs, Fojtasek also discovered some vintage Seventies-era handbills bearing the 1610 San Antonio address and had them framed as a salute to the building's heritage. Olamaie's kitchen is open and visible from some of the tables. During a soft opening preview dinner, the cooks were busy but quiet, with Nonas calmly expediting and finishing each picture-perfect plate before it was whisked into the dining room. I'm not sure how the time for such artful presentation will work when the restaurant is full and there's a need to turn tables, but the food here is a work of art.

As wonderful as the food looks, it tastes even better. Many of the dishes were based on produce from Boggy Creek Farm and Springdale Farm. "[Springdale Farm's] Glenn Foore gets a kick out of watching Grae and I check out the produce in the his farmstand, spitballing ideas back and forth about what we could make out of it," Fojtasek reports. Fojtasek says they plan to use seasonal local produce as well as ingredients from other areas of the South, such as Carolina Gold rice, fish from the Gulf, and crab from Maryland.

The salad of Maryland crab ($16) on a bed of Carolina Gold rice enhanced with a spoonful of sweet corn pudding and a dash of Tabasco is a perfect case in point. Edna's peas ($12) and the salad of cucumbers ($11) are other prime examples; the first offers a bowl of heritage pea varieties paired with tangy Pure Luck chevre and toasted biscuit crumbs, while the second presents curly ribbons, delicate slices, and artful geometric chunks of different cucumbers with tiny, gold Sun Drop cherry tomatoes in a pool of astringent buttermilk dressing.

While we were waiting for our entrees, I happened to notice a server leave the open kitchen with a plate of tall, golden biscuits. There were no biscuits mentioned on the menu, so I was immediately intrigued and the Southern baker in me insisted on trying them. Our server was only too happy to oblige, returning with our own plate of puffy, golden squares and a side of honey butter. The biscuits were ethereal – tender and flaky, absolute heaven. "We didn't want to put them on the menu, they're so labor-intensive. We thought we'd just keep them as a little secret," Fojtasek said. (Note to chef: That "secret" ship has sailed, honey. Everybody's gonna want those biscuits.)

One of our entree choices turned out to be the standout of the evening: The Sweet Tea-Smoked Pork Chop ($25) with green peach, sorrel, and picked onions sounded straightforward enough, but the dish that appeared was a revelation. Slices of tender pork were arrayed on smears of an iridescent black sauce with small chunks of fresh peach and sorrel leaves strewn about. The revelation was in the eating – sweeping a piece of pork and a chunk of fresh peach through the sauce made for a transcendent bite. Fojtasek later explained the sauce was made with burned peaches. "We burn them and then process them in the blender with a little lemon juice until all the tissue breaks down and we're left with a smooth sauce," he disclosed. Somehow, I'm thinking there's more to it than that, such as some butter and years of training.

We finished out the meal with an excellent rendition of a genuine Southern summer grace note – peach pie topped with buttermilk ice cream ($8). As much as I enjoyed the pie, it's the biscuits and the burnt peach sauce that appear in my culinary dreams.

Olamaie opens to the public tonight and they're probably already booked solid with reservations. Though street parking in that neighborhood can be dicey in the late afternoon, there are a few spaces off the alley behind the restaurant and an entire lot that becomes available after 6pm. Long-range plans call for the addition of patio dining and weekend brunches, but for now, Olamaie is dinner only. I can't wait to go back. I'll follow a trail of biscuit crumbs... 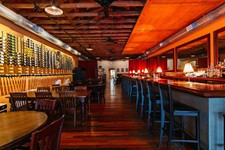 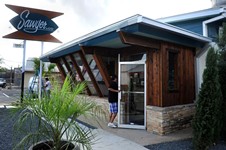