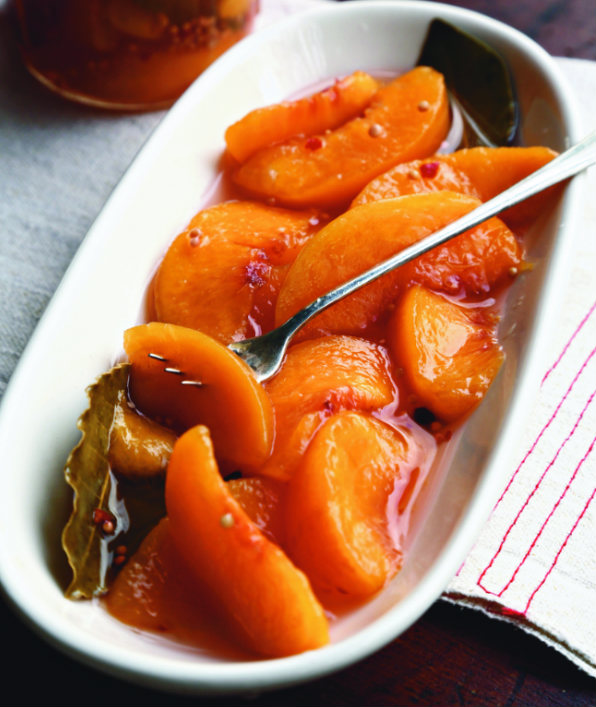 When Mississippi chef and restaurateur John Currence appeared at the Austin Food and Wine Festival in April, he preached the gospel of preserving summer's bounty and shared samples of foods pickled in his kitchen. I was hooked.

I was already a Currence fan, having eaten in his City Grocery restaurant in Oxford, Mississippi back in the days when I used to make the trek to the home of Ole Miss for the annual Southern Foodways Alliance symposiums. Currence, who refers to himself as "Big Bad Chef," has won some James Beard awards since then and now has a restaurant empire in Oxford. I always encourage Austinites to seek out his restaurants if and when they find themselves in the North Mississippi hill country. I'd love to go back now and try them all myself.

The closest I'm likely to get to chef Currence's food anytime soon is his first cookbook, Pickles, Pigs & Whiskey - Recipes from My Three Favorite Food Groups (Andrews McMeel, $40) which I reviewed when it came out last fall. There's a recipe for pickled peaches in the book (page 76) and I had made a mental note to try it when peach season arrived. Hearing chef Currence reminisce about his introduction to canning and preserving as a kid visiting his grandparent's farm in the summer and tasting some of the items put up in his own kitchen, I just knew the recipe would be worth a shot. I was right - the peaches are delicious; tangy, sweet, and savory all at once.

A friend helped me prepare this recipe a couple of weeks ago with peaches I bought from grower Cliff Caskey at the Barton Creek Farmers' Market. Mr. Caskey's peaches may be gone for the summer. but this recipe is a keeper. Considering how much my family likes pickled peaches, next summer I'll put up lots more.

These are simply the gold standard of fruit pickles and get eaten as quickly as they are preserved in our kitchens. There are so many uses for them that it is futile to even try to list them. Try these with everything, but whatever you do, make the Pickled Peach Relish (page 118). It is just amazing.

Place a medium soup pot on the stove over high heat. With a sharp paring knife, cut an “X” through the skin on the non–stem end of each peach. Prepare an ice-water bath in a large bowl. When the water comes to a boil, dunk the peaches into the boiling water, in batches, for 30 to 45 seconds. Transfer the peaches immediately to the ice bath to cool rapidly. Peel the peaches; once cooled, the skins should slip off easily.

With a sharp paring knife, slice the peaches from root to tip around the pit into 6 to 8 wedges each. Place the peach slices in a nonreactive bowl.

Combine both sugars, both vinegars, ¾ cup water, the mustard seeds, bay leaves, black peppercorns, red pepper flakes, salt, cinnamon sticks, and cloves in a small nonreactive saucepan and bring to a boil over medium heat. Decrease the heat to maintain a simmer for 5 minutes. Pour the hot liquid over the peaches and cool to room temperature.

Pack the peaches into quart-size glass jars. Make sure the peaches are completely submerged in the liquid and fill the jars to just under their necks. Screw on the lids. These will keep, refrigerated, for 8 to 10 months.

Alternatively, to prepare the peaches to store at room temperature, fill a water-bath canner or large pot with a lid with water and bring to a boil over high heat. (If you have a rack that fits the canner, use it, or simply line the bottom with a kitchen towel to prevent the jars from banging around during canning.) Carefully place the empty jars, lids, and rings in the water, filling the jars with the water to submerge them. Boil for 10 minutes. Carefully remove the jars and lids with canning tongs from the bath, dumping the water back into the bath. Briefly drain the jars on a clean kitchen towel. Fill the jars first with the peaches, and then pour their pickling liquid over them, filling to just below the neck of the jars. Wipe the rims clean, place the lids on top, and screw the rims onto the jars just finger-tight. Return the jars to the canning bath, making sure the water covers the jars by at least 1 inch. Once the water returns to a boil, simmer for 45 minutes. Remove the jars from the bath and let cool to room temperature. Canned this way, the peaches will keep for up to 1 year. Before opening a can of room temperature–stored food product, always check to make sure the seal is still good. With mason-type jars, the lid should be indented and not “pop” when pushed on. If it appears the seal is not good, discard the contents of the jar.