It takes a village to build a shop 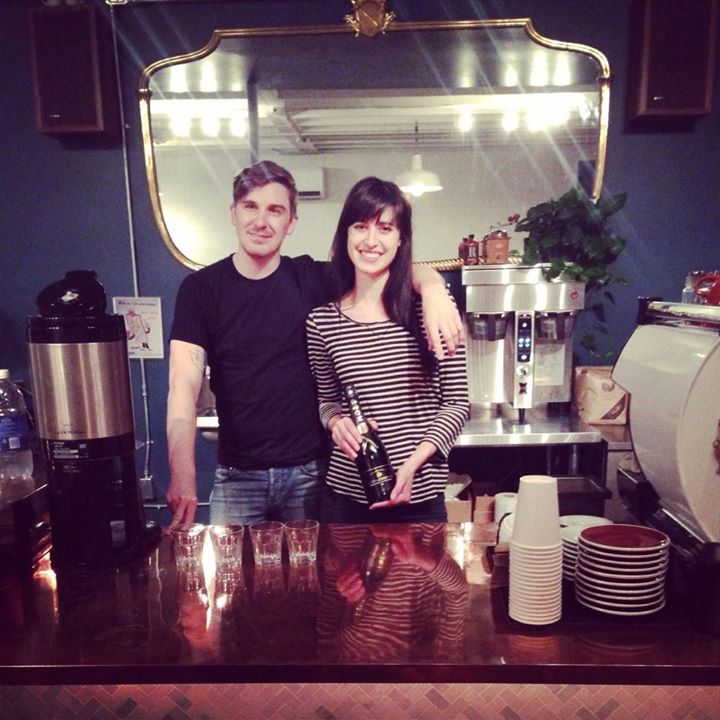 Photo by Figure 8 Coffee/ Facebook
Ryan Hall had been living with his dreams for years before opening Figure 8 Coffee Purveyors. The La Marzocco machine sitting in his room had been procured from an auction in Florida, surviving a home burglary before finally taking throne in the new coffee shop he co-owns with girlfriend Kathleen Carmichael.

The native Austin couple has lived a beverage-centric life, with Hall getting his start 15 years ago at Cedar Perk Coffee Company. He met Carmichael while managing Thunderbird Coffee, then began cocktail bartending at East Side Show Room at night and serving at Houndstooth Coffee by day. For years, the couple saved tips in order to open a place of their own.

The humble space at 11th and Chicon has been a vision of Hall’s for nearly a decade. He once lived next door and had considered the space perfect for what he wanted – a neighborhood coffee shop that offers a pick-me-up beyond caffeine.

“We just want to have a lot of character and be part of the neighborhood, and I’m totally into the idea of being the best part of somebody’s day,” Hall said.

Figure 8 officially opened its doors to friends and neighbors Monday, welcoming anyone who walked in to grab a stool at the wrap-around copper bar. The powder-coated white La Marzocco machine has place of pride in the center.

“This is the heart of what we’re doing in here. We wanted to showcase that and make that the center of what people see when they walk in,” Carmichael said.

Although the prized espresso machine may draw the initial attention, much thought was put into the shop's design – a testament to DIY. The couple spent months overhauling the shop, dedicating most of their free time to building their own venture. The building once housed East Village Cafe and was originally built as a grocery store in the late Thirties. Now, light floods into a modern space, with dark cerulean walls and reclaimed wood tables and benches from Growler Domestics. To the left of the shop’s entrance, a salvaged conveyer belt fitted with a glass tabletop waits to host its first cupping event.

The shop offers pour-over coffee, batch brew, and espresso drinks. The first bean to fill Figure 8’s hopper comes from Houndstooth’s Tweed Coffee Roasters. “Everyone from Houndstooth has been such a huge help, and it feels like family that way,” Hall said. “They’re roasting amazing coffee and so we’re starting there.”

Figure 8 is also in talks with roasters from around the country, with the hopes of soon bringing Four Barrel from San Francisco and Portland’s Coava to the fold. 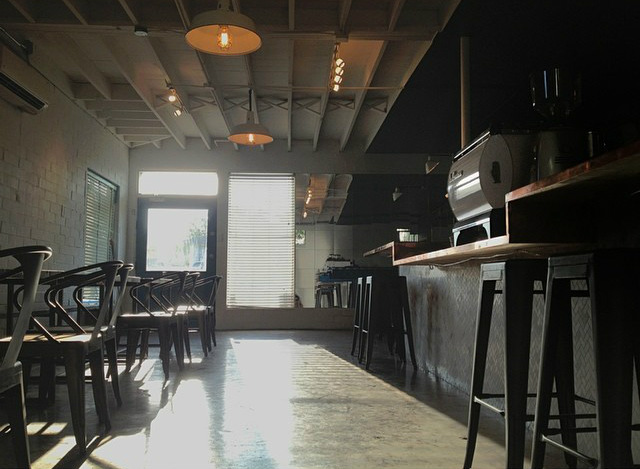 Photo by Figure 8 Coffee/ Facebook
“There are a number of good roasters you can buy coffee from, and it’s not so much that we’re reaching out to them, but that we have friends there,” Hall said. “It has been a whole small community of people that I’ve met, from 15 years ago to just these past few months.”

It may have been Hall’s and Carmichael’s penny-pinching that enabled them to sign their shop’s lease, but they had a little help from their friends, too. Volunteers gathered to drink wine and help scrape paint off the walls well into the night, making it possible to open within six months. Their buddy James Bickerstaff of Bickerstaff Signs created the sign and the painted Figure 8 logo in the window. Even the name of the shop was a friend's suggestion – it's a nod to the late musician Elliott Smith’s last studio album, but it has since taken on new meaning for the couple.

“It’s a classic ice skating move, and it’s something that’s difficult to do. But when done by someone who knows what’s up in the ice skating rink, it’s done with grace,” Carmichael said. “A lot happens like that with coffee. So much goes into every single shot.”

No corners are cut at Figure 8. The couple invested in a high-end water filtration system and provides hormone-free Mill-King milk to supplement their quality brews. They eventually plan to offer pastries and breakfast tacos as well as cafe staples like sandwiches and salads in the near future, but for now they are focusing on what they do best.

“If you’re going to do it, every day, you might as well have the discipline to do that one simple thing, that ritual, really well for yourself and for your friends,” Hall said.

It doesn’t take a coffee connoisseur to see the passion and pride that’s gone into Figure 8, especially if one takes the time to talk to the couple. Although they admit it’s still surreal to drink a cappuccino in their own shop, they’re ready to share what they’ve built from the coffee grounds up.