The Original Hoffbrau is 80 Years Young 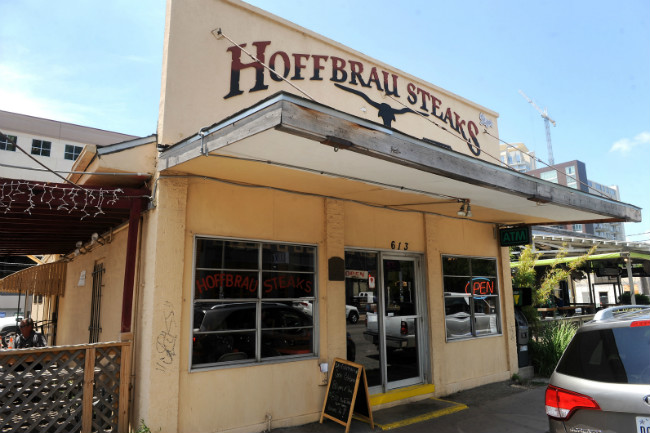 What does it take for a restaurant to remain open in the same location in the same city for 80 years? Hard work, a convenient location, good luck, and four generations of one family willing to mind the store. Austin's Original Hoffbrau Steaks (613 W. Sixth) has all that, and more.

Tom and Coleman Hamby opened the original Hoffbrau as a biergarten just as Prohibition ended in August of 1934. Encouraged by the hungry, free-spending soldiers from the nearby Bergstrom Air Force base, by 1941 the Hamby brothers were serving steaks, chunky fried potatoes, local Buttercrust bread, and a salad loaded with garlic to a loyal clientele. Coleman's sons, Tom and Robert Hamby, took over the operation from the Fifties until the Nineties, at which point daughter Mary Gail Hamby Ray came on board. After more than 20 years, Mary Gail will soon pass the torch to her son, Zach Ray. The Hoffbrau lives on.

To commemorate 80 years in business, last week Mary Gail hosted a luncheon for city officials, a few members of the media, and some longtime regular customers. She received a proclamation from the city saluting the iconic Hoffbrau's accomplishments. "There aren't too many people left around who still remember my grandfather, so it was good to have one of the Bergstrom veterans eat with us that day," Hamby Ray told us.

To celebrate the restaurant's longevity with customers, the Hoffbrau will offer the following specials all month.

While Mary Gail admits that "change" is considered a dirty word to her clientele, the business now has a website and she has added a few wines to the menu as well as a good quality tenderloin ($16.50 and $18.50, depending on portion size). A plan to update the outdoor seating area and add a patio bar is also in the works. So if you haven't hit the Hoffbrau in a while or you've yet to experience this legendary Austin icon, now is the time.