Longtime University of Texas English professor Joseph Evans Slate died Wednesday, July 16 at the age of 86. We don't normally note the passing of UT profs in our food section, but unbeknownst to many, Joe Slate had a serious impact on the Austin food scene.

Slate's contribution to Austin food is based on the fact that his wife and former student assistant, Patricia Bauer-Slate, was one of the founders of Austin's renowned Sweetish Hill Bakery. According to Patricia, Joe was crucial to the development of her career and the success of Sweetish Hill in very many ways.

"We were in Vienna for his Fulbright teaching appointment the year after we were married (1972-73) and while he was working, I was discovering the markets and the pastries in coffee shops," she recalls. "I ended up meeting Tom Neuhas in Vienna through mutual friends and we decided to come back to Austin and start a bakery based on the baking techniques we learned there."

That bakery was the original Sweetish Hill, which Patricia and Tom started in 1975 in an old Victorian house on the crest of Swede's Hill at the corner of Waller and East 15th St. They eventually moved to a converted gas station at the corner of W. Sixth and Blanco where they also operated both the bakery (now Clark's) and a cafe in the space that's currently home to Cafe Josie. Sweetish Hill (1120 W. Sixth) moved to current location in 1992 and Patricia sold her interest in the bakery to Jim Murphy a few years ago.

"Joe was a huge part of my starting and being successful at Sweetish Hill. He kept a roof over our heads and paid the bills, allowing me to work the first few years without taking money out of the business. He introduced me to many ethnic cuisines and was a wonderful cook and host, both at home and the store. He smoked our salmon and our turkeys and rolled literally thousands of grape leaves over the years. When we served brunch at the cafe and the younger set were toiling away at their various jobs, he'd don his Viennese-bought tuxedo and sneakers and seat guests, adding some gravitas to our enterprise," Patricia recalls fondly.

Joe Slate is survived by his wife Patricia Bauer-Slate, son John Slate of Dallas, daughters Ann Gaspari of Dallas and Bridget Slate of Austin, several grandchildren, and a host of friends and colleagues. The family will hold a memorial service in Joe Slate's honor on Friday, Sept. 5 at 5pm in the University Catholic Center (2010 University Ave.).* Guests are invited to stay for a spaghetti supper afterwards.

*Please note the date change on the memorial service. 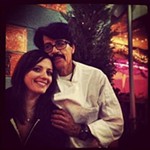 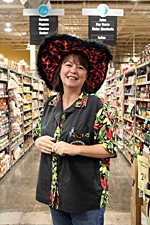