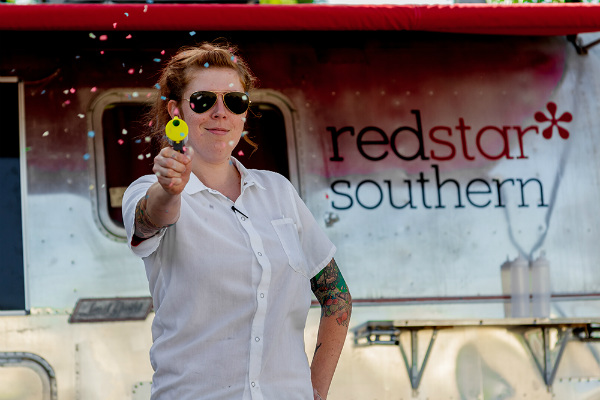 Pastry chef Erica Waksmunski may have earned her kitchen bona fides in upscale fine dining restaurants around the country, but her culinary roots run deep in the the home cooking of the American South. She's serving up East Coast-Southern food at her new trailer, with a droll sense of humor very much in evidence..

Confetti cannon and hilarious opening video notwithstanding, Waksmunski has serious cooking qualifications; she just refuses to take herself too seriously. She made that clear in our recent conversation about the opening of her new trailer, Red Star Southern. "I'd accomplished many of the things I set out to do in the pastry realm and decided it was time for a change when I realized the most fun I was having every day was preparing family meal for the staff at the restaurant (Congress Austin, Second Bar + Kitchen)," she explained. Creating soul-satisfying food for friends seemed like a positive new direction.

Once Erica acknowledged she was ready to take on a new challenge, it became clear that the fastest, cheapest way to get up and running was to go the food trailer route. Not long after she had her new business plan mapped out on paper, she came across an Airstream trailer for sale online. Serendipitously, it was parked about three miles from her house and already outfitted for cooking. "These two women had used it for their business. It was already beautifully built out with good equipment. I only had to make a few minor adjustments. It's great," Waksmunski said with pride. 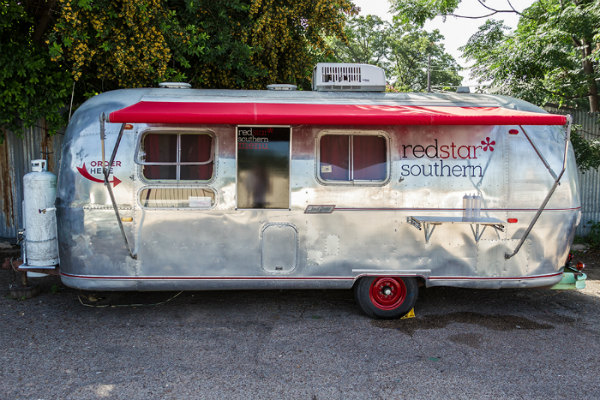 So Waksmunski's concept for Red Star Southern is to put her personal spin on the East Coast Southern foods she grew up eating and cooking, dishing them up to old and new friends. Look for things like North Carolina pulled pork on her own bread with a tangy sauce, Nashville hot fried chicken, pimento cheese, deviled eggs, biscuits and gravy, seasonal side dishes inspired by local produce, and even something sweet when the spirit moves her. "I'm finding that I already miss making ice cream," she muses.

Her new trailer is located in one of Austin's hottest nightlife districts where she'll be sharing the parking lot with a well-respected Veracruz All Natural trailer parked outside the Grackle (1700 E. Sixth). "I'm enjoying getting to know them and know they'll be great neighbors. And being in this particular area, I'm hoping people who work in the bar and restaurant industry over here will come eat with me," Erica said.

I have no doubt that Erica Waksmunski will get her wish. Her fellow hospitality industry workers are bound to appreciate a good meal and a good laugh. Red Star Southern opens this Sunday, July 20 at 5pm.