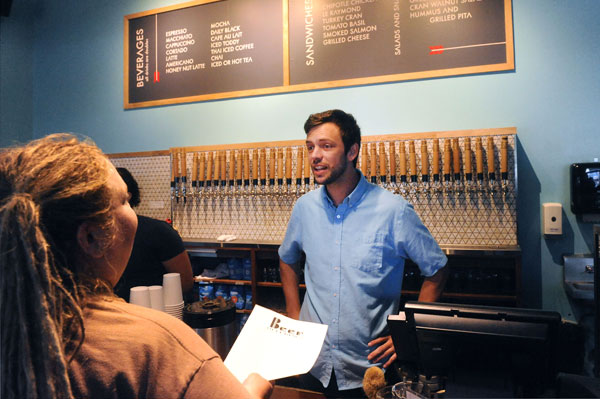 Rebranded as Thunderbird Café & Tap Room, the tap room is just one aspect of the cafe’s impressive redesign. The well-loved space also received a modern update courtesy of Lilianne Steckel of namesake design firm Lilianne Steckel Interior Design. The inside is sleek, yet still cozy, while the outdoor covered patio is lined with comfy benches and illuminated by contemporary fixtures. It appears as though Thunderbird is gearing up to take on a happy hour crowd, and I’d say they’re ready for it. Featuring 34 well-chosen beer taps, Thunderbird's offerings include an abundance of local favorites from breweries such as Live Oak, Austin Beerworks, Real Ale, Twisted X, 512, and Adelbert’s, as well as a smattering of highly sought-after brews from Prairie, Southern Star, and Harviestoun, among others. I’m still dreaming about the Petrus Aged Pale from De Brabandere. It was my first time to try it, and I think that’s part of the charm. Folks who love beer can go by and try a variety of brews in an inviting, nonintimidating space. For those just dipping their toes into the craft beer waters, it’s ok. You don’t need to know how to pronounce the brewery name or beer (unless of course, you'd like to), the menu allows you to simply ask for the coordinating number on the menu. The food menu includes affordable and delicious housemade sandwiches such as chipotle chicken and the Le Raymond, a delicious combination of turkey, brie, basil pesto, and red onion, in addition to the standard offerings of Tacodeli breakfast tacos and treats from Quack’s Bakery, Celeste’s Best, and Rockstar Bagels.