JuiceLand Takes Over the World 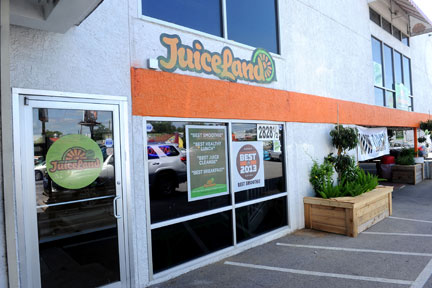 The newest JuiceLand in the UT campus area (Photo by John Anderson)
Austin's food scene has changed a lot since Matt Shook got his start as a part-time juicer in 2001 at what was the Juice Joint on Barton Springs Rd. Back then, there were only a handful of juice companies in Austin.

Today, fresh juice bars are a happening thing and Shook, now the owner of JuiceLand, is saturating the market with two new locations that have opened in the past few months, with another two slated before the end of the year.

“The reason we’re opening so many so quickly is the demands of our customer base,” Shook said. “People have told us for years if you come to Westlake, we’ll take care of you.” The store has been busy at its new spot in the Village at Westlake at Highway 360 and RR 2244 since the May 1 opening, Shook said.

It may seem odd to picture JuiceLand in a strip mall, considering the original location on Barton Springs near Zilker Park and the Hike-and-Bike Trail could best be described as a divey juice shack with a penchant for heavy metal music. However, the concept cleans up well and has other Austin originals like P. Terry’s and Tacodeli next door in its new digs.

Shook is also excited to give UT students a taste of the juice bar experience at the shop he opened at 29th and Guadalupe Street on July 1. He attributes the growing demand for fresh-squeezed juice and smoothies to different audiences simply catching onto the goodness that flows from them. More and more, he sees athletes coming by for a post-workout boost. Busy professionals turn to JuiceLand for a quick nutrition fix, while others see it as a gateway to a healthier lifestyle. In that case, Shook said he likes to get them started on simple drinks and watch their healthy palate evolve.

“A good diet equals a healthier outlook on life. We pride ourselves on that, “Shook said. “We like to help people move into a healthier way of life. That’s one of the major reasons why I like the juice bar industry, because I get to help people feel better.”

The juicy gospel is getting spread throughout Austin, with JuiceLand original concoctions Recovery Punch and Applelilly now bottled and available in all Yoga Yoga outlets as well as several neighborhood markets, eateries, and coffee shops around town. The to-go juices, which have only been available for a few weeks, go through High Pressure Processing (HPP) to kill bacteria and extend shelf life while keeping nutrients and flavor intact. But Shook said he still prefers for people to come into one of the shops and get the juices fresh.

If you’re looking for a classic, the daily number one seller since Shook concocted it back in 2001 is the Originator smoothie, made with apple juice, bananas, blueberries, and cherries mixed with spirulina, flax oil, and rice protein. For a hangover cure, try a re-hydrating watermelon agua fresca. Customers who've felt as though they were coming down with a cold have told Shook that a shot of the Medicine Man, a spicy mix of ginger, jalapeno, habanero and others, helped knock it out. JuiceLand also has a full-time cleanse coach to help those interested in a cold-pressed juice cleanse program.

“Juice makes people feel good. It’s like a natural high,” Shook said. “I don’t think people understand how many flavors you can get out of a cup of juice and exotic spices. The fresher the fruit and vegetables, the more exciting the flavors.”

Shook found his passion by chance, as a 20-something who loved going to Barton Springs Pool and decided to find work down the street. He co-founded the Daily Juice in 2003 and parted ways with that company to start JuiceLand in 2011. In just 3 years, he has created not just a juice land, but a juice empire, and at the end of this summer, he will extend that empire to Brooklyn when he opens up a spot in Park Slope. His friend, Clay Mallow, owns several other food joints in the area and is helping him get it off the ground. Shook will soon make a visit to help Mallow open the first JuiceLand outside the Austin area, and he’s taking a few employees with him.

“Probably what I’m most proud of is the team that I’ve built over the years,” Shook said. “The team at JuiceLand is people I love with all my heart. Some of them have been with me for 10, 8, 5 years, so really, the team has built something special and I’m really glad I could be part of it.” 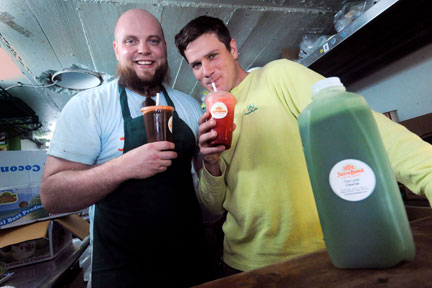 Once he returns, Shook will be gearing up to open a spot in far north Austin and one in far south Austin before the end of the year. Customers can also visit the website to suggest where JuiceLand should get fresh next with its Put Us On the Map feature.

“I just want to give a shout out to all those customers that I've seen in my stores over the years, you know who you are” Shook said. “We look forward to serving you for many more.” 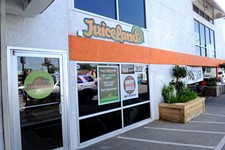