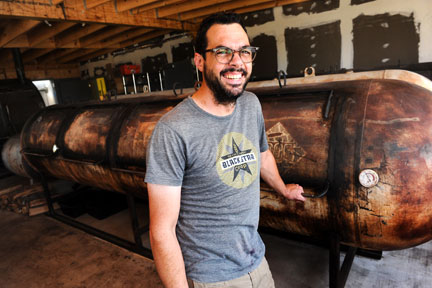 Aaron Franklin shows off his newly enclosed smokehouse (Photo by John Anderson)
We had a little chat with Aaron Franklin on Monday about the restaurant’s reopening after the expansion shutdown, and he revealed a few smoky nuggets. If you were expecting more seating in the dining area, forget about it.

Austin Chronicle: The expansion is all elevated. Tell us about that.

Aaron Franklin: It’s 1,000 square feet of kitchen space that extends out over the parking lot. No extra seating inside. The firewood will be stored underneath, so it can stay dry. We put in a freight elevator, so we won’t need to be lugging anything up the stairs. The existing smokers have all been moved inside. AC: What about the new rib rotisserie and sausage smoker we've heard about – are they in use yet?

AF: The new rib rotisserie and the sausage smoker won’t be going for a while yet. It’ll take some time to learn how to use both of those new smokers, and we’re not rushing into anything. Baby steps. We’ll have the sausage up and running in a few months. It’s our same recipe that we have made for us now, but we’ve been playing around with our trim, and trying some stuff out, and we’ve been really happy with it. We’re phasing into this new stuff; it would be crazy to try to do it all at once.

AC: Is the new smoker arrangement cooking yet? Any idea how hot it's likely to be with the smokers enclosed now? 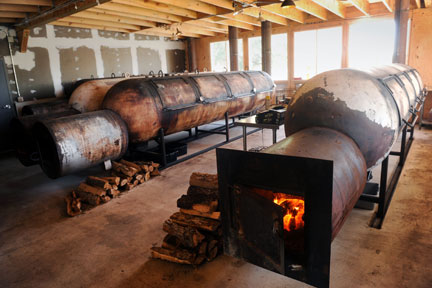 AF: We’ve had the smokers running in the expanded kitchen for a couple of days now. We got all the chimneys in, and have some huge exhaust fans in there, plus a couple of big fans on the floor, and it’s gonna be pretty flippin’ hot, but we can cart everything to the front now; we don’t have to go as far, and we don’t have to hand-carry product and deal with the steps and rain and cold. It’s gonna be sweet.

AC: So how is the expansion going to affect your famous line and the customer volume?

AF: We’re cooking about 2,000 pounds of brisket a day now, and that’s enough. We’re not out to kill ourselves. Consistent taste and the quality is the most important thing. This expansion makes it easier on us and the staff, so we’re not having to work 24 hours a day. We can have time now to actually get a few hours of sleep and run it more like a regular schedule. We’re talking about maybe doing a trailer to serve part of the line down the road sometime, but the total amount of food is staying the same, so it won’t really affect volume. We’re probably gonna plant some trees and stuff later on, who knows. This expansion is the first phase of an evolving process, and we’re not rushing into anything. 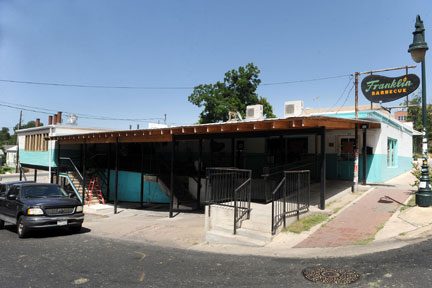 The newly expanded Franklin Barbecue, without the line (Photo by John Anderson)

Franklin Barbecue reopens Tuesday, July 8, as previously announced on their website, and I have no doubt that their now world-famous barbecue will be just as good as it’s always been, if not better. After all, the staff will certainly be more comfortable, and their culinary artwork will be a little easier to perform. Baby steps indeed, but constantly evolving and moving forward. 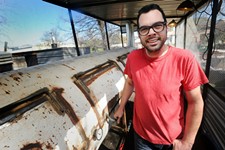 Aaron Franklin Is on Fire
Local pitmaster does a victory lap