Get ready for an onslaught of shows featuring Austin on various cable networks over the next few weeks. I had a chance to preview a classy new show from the Esquire Network called America's Best Bars. It debuts tonight with an episode about Portland's prime drinking spots, but an episode on Austin is up July 2.

My favorite line in Episode 1 is during the introduction where they show the city’s motto. Are you ready for this? Portland, Oregon's motto is "Keep Portland Weird"! How about Keep Portland Plagiarizing! But once past that minor faux pas, the show becomes an excellent guide to great bars and stunning drinks. The featured bars in each episode are selected by cocktail historian David Wondrich, who picks the annual Best Bar list for Esquire magazine. The shows are hosted by two very funny stand-up comedians, Jay Larson and Sean Patton. 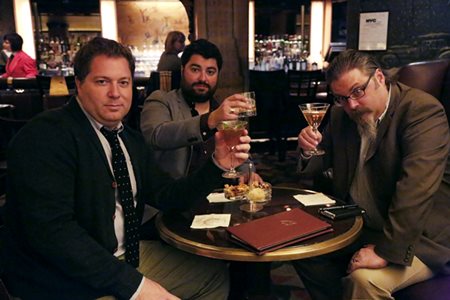 photo courtesy of The Esquire Network

The season will include 10 episodes with the show shot in Austin running Wednesday, July 2. While the crew was here, they visited the Cloak Room, Donn’s Depot, Midnight Cowboy, Bar Congress, Half Step, Wonderland, and Botticelli's. Austin's watering holes look very inviting. This show is really worth watching; funny, intelligent, and expensively produced.

If that's not enough Central Texas on TV for you, well, there's more coming. Roger Mooking's first-rate Man Fire Food, kick's off its third season on the Cooking Channel this coming Tuesday, July 2. Mooking discovers the Global Flavors of Texas, starting in San Antonio, and moving up to our neighbors in Elgin, where he learns the craft of sausage-making during a visit with the folks at Meyer’s Sausage. Mooking is a bit corny, but his information is spot on and his producers always manage to find some incredible places to film. One of my recent favorites was an episode covering the fire-roasted coffee at Summermoon Coffee Bar (3115 S. First) here in Austin. 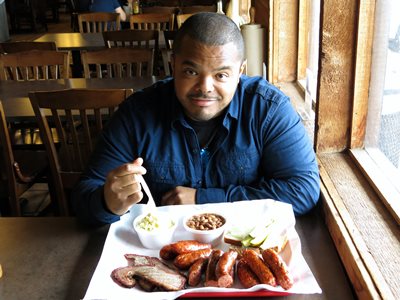 photo courtesy of The Cooking Channel

Another visitor from the Cooking Channel also starts this season in Austin. The July 10 premiere episode of the third season of Chuck’s Eat the Street is "Authentically Austin," where host Chuck Hughes eats his way from one end of our Lamar Boulevard to the other. In the process, he'll meet chef Jeramie Robison at Uchi, make pork belly sliders with sous chef Sam Hellman-Mass and the crew at Odd Duck, discover the secrets of chile rellenos en nogada from chef Marisela Godinez at El Meson, and stoke the fires at Stiles Switch BBQ & Brew with pitman Lance Kirkpatrick. 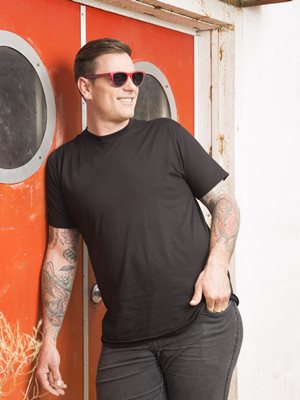 photo courtesy of The Cooking Channel