This summer’s Community Lunch series hosted by Urban Roots kicked off in early June amongst shade-dappled, tablecloth-draped picnic tables full of enthusiastic diners. In its third year, the series of seasonal Friday lunches features meals prepared and served at the Urban Roots Farm by youth farm interns under the tutelage of area chefs. 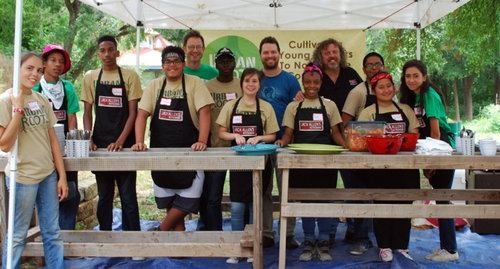 Last Friday, lucky guests were treated to the inspired creations of Urban Roots youth farm interns under the guidance of Austin's famous father and son chef team of Jack and Bryce Gilmore.

Among the supportive crowd of community partners, board member and State Rep. Eddie Rodriguez (D-Austin), founder and chair of the first Farm-to-Table Caucus of the Texas House of Representatives, was in attendance, briefly addressing the audience. He followed Max Elliot, Executive Director of Urban Roots, who introduced guests and humbly thanked attendees. The attention was then turned to the real rock stars of the day – the enthusiastic team of interns who grew and harvested produce for the multicourse lunch they prepared that morning at Jack Allen’s Kitchen, under the direction of chefs Jack Gilmore and son, Bryce Gilmore, owner of Barley Swine and Odd Duck. 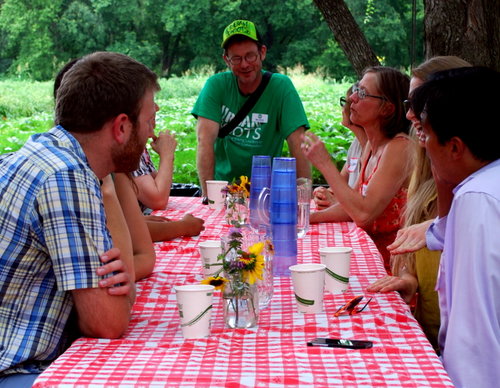 It was evident the ensemble cast had enjoyed their hard work as the team and its mentors traded broad smiles, and playful jabs. After warm, poignant, and sometimes funny presentations by each of the interns – brief introductions and explanations of their role in preparation of the meal, the team prepared for service. The dishes were presented proudly, and healthy spoonfuls were accompanied by friendly exchanges with each guest as we offered our plates. 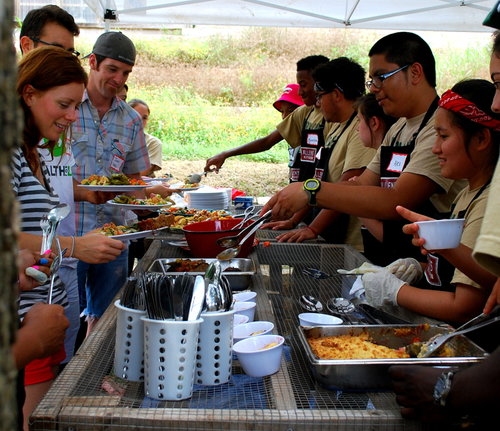 The feast is served! (Photo by Maggie Perkins)

Chef Jack Gilmore, who has been involved with Urban Roots’ community lunches each year since inception, offered hearty handshakes and plentiful praise to each of the interns. The affable Gilmore thoughtfully attended to the meal service, taking a supporting role to the chefs of the day.

In the culinary hotspot scene of Austin, it would seem a tall order to stand out in an already star-studded, be-ribboned crowd, but for chef Bryce Gilmore, owner and executive chef of farm-to-table, trailer-to-brick-and-mortars Barley Swine and Odd Duck, the accolades just keep coming. Formerly recognized as Food & Wine's Best New Chef 2010, the second-generation Chef Gilmore is a recent James Beard Award finalist as Best Chef – Southwest for the second year running. His restaurants frequently land on best-of lists, and a seat at his table, as the frequent, artfully Instagram’d proof of one’s presence attests, is among the hottest tickets in town. 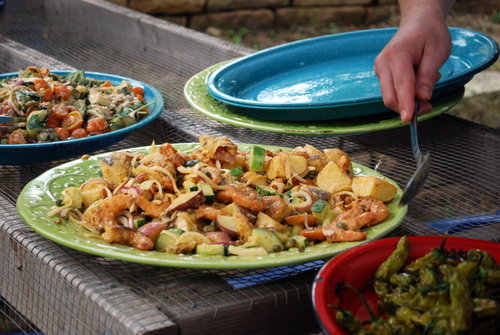 This day, however, both Gilmores focus the limelight on the precious resources of time, talent, enthusiasm, and raw ingredients – all the product of Urban Roots. They proudly stood by as their team of interns served grilled squash salad with sun gold tomatoes and goat cheese, roasted potatoes with grilled shrimp and peppers, Killer Meatloaf with okra and tomato gravy (and it was!), tomato and basil salad, and peach cobbler. Not one dish was short of delicious, and the congratulatory hums of approval around each table as diners fell almost silent over their plates were well-deserved.

Though the final Community Lunch of the summer with chef Jam Sanitchat of Thai Fresh is now sold out, it is possible become involved with Urban Roots through volunteer opportunities at the farm, and by visiting their booth at the SFC Farmer’s Market Downtown every Saturday morning from 9am to 1pm, April through August, and again from October through December, where the young interns answer questions about the program and proudly sell what they produce. Visit their website at www.urbanrootsatx.org