Hopper Energy Bars Ready to Jump Into the Local Market

Mixing it up with peanuts and honey and crickets and more 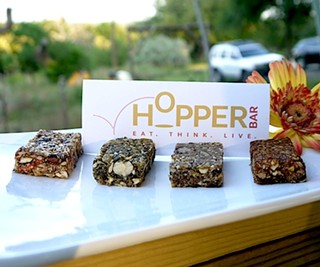 Jack Ceadel’s got an energy bar, one of those nutty-grainy sort of things that you eat on-the-go or as a between-meal snack, and, oddly, it’s as tasty as a dessert.

I say oddly, because don’t energy bars tend to taste pretty damned bad? Like someone had been trying to make a granola bar, “energy”-packed or not, and failed?

Ceadel and his team at Hopper Bars have that problem solved, at least in the case of their peanut-butter-infused Longhorn Bar. Incredibly tasty, this bar, besides being good for you. And what I tasted was just a prototype, as Ceadel’s the main man behind new Austin start-up Hopper Bars and was sharing a few versions of the forthcoming product with me.

Because I’m the go-to person regarding entomophagy at the Chronicle.

Entomophagy, yes. Because the not-so-secret ingredient in these bars is cricket powder. Made from dried, ground-up crickets. Which is, of course, healthy and all-natural protein.

“Each of our bars has about two and a half grams of cricket powder,” says Ceadel. He’s got the sort of accent you get when you come from wherever he’s originally from in England.

(Note: Eating something made with cricket powder is no problem for me. Even roasted whole, add a little salt, a little pepper, and crickets are like a more nutritious form of Chex mix: good stuff.)

What’s a problem for me is energy bars in general. Which is why that one Hopper Bar was such a revelation.

“That’s the Longhorn Bar,” says Ceadel, “that’s the one with peanut butter. It's got honey in there, a bit of brown rice syrup. Originally, we were making them with cane ­sugar syrup, but the glycemic gradient was a little too high, and also it's very expensive. We were making our own, but once we step up the scale, there'd be no way to do that. So it's largely brown ­rice syrup and a little raw honey. It's almost Paleo-friendly, but not quite.

“What we're experimenting with,” he says, “this is the first time we've pulverized the nuts to an extra level. I think what we're gonna do is a two-stage process, so some of the nut pieces remain larger in the finished bar. One of the reactions we've had from people is, ‘Oh, it tastes like real food,’ as opposed to just another energy bar. And I think that's what we're trying to have over existing competitors in the ento industry. We're going for, in terms of marketing position, for the Clif Bar, the Kind Bar area.”

Hopper is also working on two other bars. Which they’re planning to name, as they did with the tastiest one, after bits of local flavor. This is a very Austin-centric company.

“We have the Red River Bar,” says Ceadel, “which is cherry ­and ­cranberry; and we have the Zilker Bar, with green tea, kale, and seaweed.”

Journalistic integrity demands that I tell you: The cherry-and-cranberry one tasted like, well, like just another energy bar. The green tea, kale, and seaweed bar, though? As they say in the funny papers, “Blecch.” But then – these are prototypes, after all. And Ceadel had warned me that the seaweed-and-kale bars he brought along were “definitely not what we’re going for – the recipe still needs some tweaking and this batch was a bit … off.”

I suggest that the Longhorn Bar with its peanut-buttery goodness doesn’t need any tweaking at all, that it was really on, that I’d like to eat 10 more of them right now. So where, when the line is rolled out later this summer, are they going to be available?

So, maybe at in.gredients on Manor? Because that excellent Eastside emporium and cultural hub already carries cricket flour from World Entomophagy – the same company that supplies cricket powder to Hopper Bars.

“In fact,” says Ceadel, “Hopper Bars is doing a tasting event at in.gredients on the 8th of July.”

“Okay, hold on,” I say to the entrepreneurial Brit. “You keep referring to cricket powder. But what World Ento sells – and keeps in.gredients stocked with – because it seems a popular thing – is called cricket flour. Is there a difference?”

“So they take the pure cricket powder and step on it?” I ask. “Like drug dealers with coke or heroin?”

Ceadel laughs. Or anyway he sort of laughs. “Well, yes, but they’re doing it for practical cooking reasons – not for extra profit.”

“And you guys at Hopper, you use cricket powder. And definitely not whole crickets, right?”

“I believe powder is the bridge to entomophagy,” says Ceadel. “Because there's no legs, no antennae, no bits of exoskeleton. And if someone eats one of our bars and enjoys it, they're open to the whole insect thing. Our mission is to approach the problem of normalizing this, because it's important to re­introduce insects into the Western diet, for sustainability reasons – but also for health reasons.”

That’s the kind of ecological and culinary philosophy you’ll likely hear from Hopper Foods honcho Jack Ceadel while sampling the company’s wares at in.gredients later in the month and, even before that, at the annual Zilker Park Bug (Eating) Festival on Saturday, June 21.

(Note: That day, the summer solstice? That's also my birthday; perfect excuse to treat myself to another one [or 10] of those tasty Longhorn Bars.)