Chill Out at Frozen Rickshaw

It's time once again to flock to snow cone stands and local ice cream shops that offer perhaps the best respite from the Austin heat if you don’t have time to take a dip in a local swimming hole. We’ve got our pick from gelato to custard to frozen yogurt, and this season there's handmade mochi ice cream from the Frozen Rickshaw (502 W. 30th). 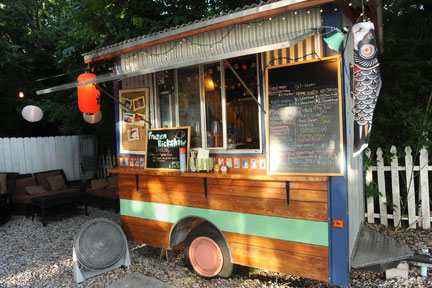 Mochi ice cream is derived from a traditionally Japanese dessert, mochi, which is made by pounding sticky rice into a paste and molding it into a desired shape. For its frozen counterpart, it takes Frozen Rickshaw’s owner Apphia Mann three days to make a batch. The labor-intensive process was going to be a side project for Mann’s Asian ice cream spot until people started talking and the trailer gained a reputation as the place to get handmade mochi ice cream even before it opened last October. 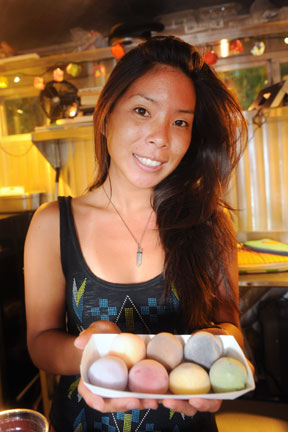 “Word got out and really that’s all people heard, so I had to take that ball and run with it,” Mann said. “It’s worked out pretty well so far.”

Creating these unique treats is a staggered process. For a traditional flavor like taro, a root native to southern India and southeast Asia, Mann starts by cooking her custard, letting it cool, and mixing it with pureed taro. She lets the flavors blend overnight before transferring the mixture into an ice cream maker and lets that harden in the freezer for another night. She then scoops the ice cream into 1-ounce balls and lets them set in their final shape for one more night. On the third day, she sheets out the sweet sticky rice and has to work quickly to wrap the ice cream balls before they start to melt or the rice hardens too much to stick.

The result is a two-bite treat that can be eaten with your hands. The rice skin helps prevent sticky messes as well as adding a chewy dimension to this otherwise creamy dessert. Mann generally offers six flavors of her mochi ice cream at a given time, including her regulars: taro, green tea, and strawberry passion fruit sorbet. The other three flavors depend on what’s fresh at the market, what she feels like eating, and what inspires her that week.

“Sometimes I’ll try flavor pairings or remember one I’ve had in the past,” Mann said. “Citrus with almond or amaretto-flavored treats are pretty popular, so I tried a citrus almond mochi and people really liked it.” Mann went to culinary school at the French Culinary Institute in New York City and worked as a line cook at several restaurants before her sister convinced her to buy a one-way ticket to Austin. After leaving her job as a research and development chef at Michael Angelo’s Gourmet Foods, she figured now was the time to get a taste of business ownership.

Like so many beginning restaurateurs, Mann decided to go the trailer route and found a home for her new venture on Craigslist. She works in close quarters with prep tables and a freezer custom made with 12 shelves and welcomes patrons at an order window adorned with a string of origami balloons. Mann invites guests to cool down at a picnic table or on lawn furniture in her homey space. When the sun finally begins to dip in the sky at night, Frozen Rickshaw can still be found by the light of the paper lantern hanging from the trailer – the same lanterns found outside Japanese izakaya bars to denote that it serves food.

Besides its signature mochi ice cream, Frozen Rickshaw’s menu also includes ice cream on its own as well as beverages like its lychee fizz special, made with fresh orange juice, lychees, aloe, and soda water. Although her shop opened last October, Mann closed for the winter and currently plans to do the same once the summer months are over this year. She reports that so far, the reception of her cool Asian treats has been positive and she might look into opening another trailer or venture into wholesaling in the future. For now, she’s focusing on her little corner of Japantown on 30th street and is sticking with dessert.

“With savory, you have a lunch rush and dinner rush, so you have to hire someone,” Mann said. “You have 3 hours where all your business is put into, whereas the dessert business is spread throughout the day. It can be a one-woman operation. I don’t really have a background in pastry, or dessert, but I know food and I know flavors, and I knew I could do ice cream.” 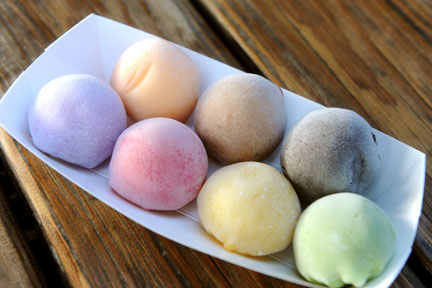