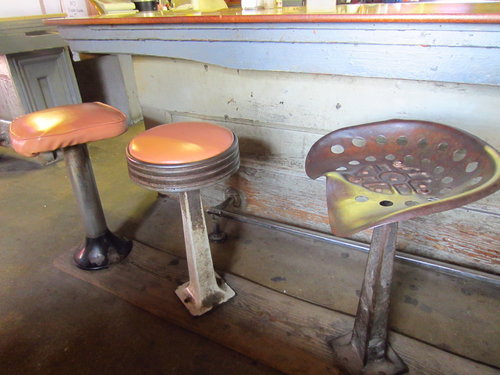 Stools at the iconic Taylor Cafe (Photo by Mick Vann)

The girlfriend and I were on our way north on Sunday, and we figured since Taylor was only a few miles down the road, perhaps some barbecue would be in order. I knew that Louie Mueller’s was normally closed on Sunday, but thought maybe Vencil Mares’ Taylor Café would be open. We were in luck.

Taylor was the site of a major Indian battle with the Comanches in 1839, and in 1876 became a railhead situated along one of the major cattle trails. Along with the railroad came a colonization of farmers and businessmen, mainly from Midwestern and Southern states. The rich pastureland was soon cultivated and began to produce an abundance of cotton. An influx of settlers from Czechoslovakia and other Slavic states, as well as from Germany and Austria, helped establish the town.

By the early Fifties mechanical harvesting had replaced the human cotton pickers around Taylor and the economy begin to change. As the century progressed, cotton production had been joined by feed corn, winter wheat, and cattle. Today's diverse population of about 15,000 includes people of English and Scots-Irish background, as well as Czechs, Bohemians, Germans, Swedes, Hispanics, and African-Americans. Vencil comes from down the road toward Flatonia, of Czech and Bohemian stock, with (as he puts it), “a little billy goat thrown in.” The whole town is proud of their status as a barbecue destination. We figured that eating with Vencil Mares on Memorial Day weekend would be appropriate, since he was an Army medic in the D-Day assault and patched-up soldiers all through the war, including at the Battle of the Bulge. When he returned home from WW II, he got a job at Southside Market in Elgin, where he learned the barbecue business and basics of sausage stuffing. In 1948, a year before Louie Mueller opened his place, Mares opened the Taylor Cafe in Taylor’s oldest building downtown. It sits under the shadow of the overpass, where Main Street/Highway 95 transit the railroad tracks. If you’re coming east down Highway 79, take a right just before the overpass and Vencil’s place will be on the immediate right, on the corner; there’s plenty of parking. 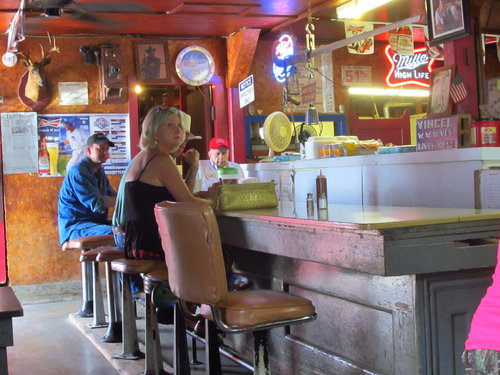 Customers at the counter, with Vencil in the red cap (Photo by Mick Vann)
Enter from the rickety screen door on the south side of the building; the pits are to the left, and Vencil usually holds court at the end of the long, u-shaped bar, sitting just inside the door. He’s 90 years young and a little stooped, but he still comes to work every day. Menus are handwritten on poster board with a magic maker, and both of the servers are down-home casual and efficient as hell, from working the same regular crowd, in the same tight space, putting out the same great food, for many, many years. 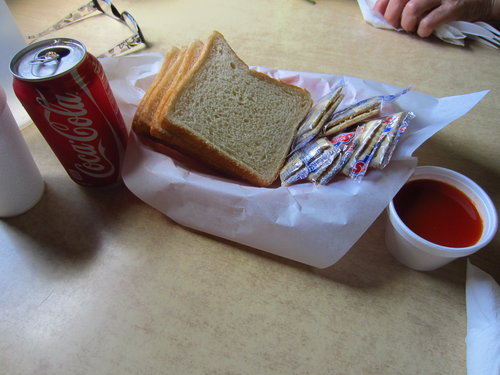 We opted for the three-meat plate (me fatty brisket and her, lean) pork rib, and some of Vencil’s peppery handmade beef sausage. We also needed a pound of Vencil’s turkey sausage on the side, to nosh on (the leftover was a TV snack that night). Throw in a basket of white bread and saltines, a killer sauce (perfectly balanced twixt sweet and sour, add tomatoey, garlicky, spicy), a pitcher of ice water, a mound of some pretty damn good mustardy potato salad and some rich, meaty pinto beans, and there's a fantastic meal for 10 bucks or so. The fatty brisket was ethereal: meltingly tender with just the right amount of tug when pulled. It has a thick smoke ring and a peppery, smoky bark that just add a couple of more layers of complex flavor to the beefy brisket. The beef sausage has a nice snappy casing, and a smoky flavor with the kiss of spicy pepper and garlic. The forcemeat is medium-coarse grind and has enough fat to make good flavor, but not too much to make it taste the least bit greasy. Good sausage. The pork rib had a nice smoke ring and great porky flavor with the right amount of juiciness and smoke, but it could have used just a touch more time in the offset smoker over the post oak to reach perfection; still, a damn good pork rib. The turkey sausage is a slightly finer grind than the beef sausage, and loaded with smokiness. It could have had a bit more fat added, but I wouldn't call it dry. It runs a close second to Billy's Inman's turkey links, with Billy’s being coarser, more moist, and smokier. Still, I loves me some smoked turkey sausage (the REAL stuff, not that grocery store crap), and it’s really hard to find at many area barbecue joints. I’d like to think I controlled my three-meat plate as well as Bill Pickett controlled the steers he bulldogged back in his day. Pickett (1870-1932) was a black cowboy from Taylor who initiated the practice of “bulldogging” or steer wrestling, and in 1971 was posthumously inducted into the Cowboy Hall of Fame. Pickett controlled the steer by sinking his teeth into the animal’s upper lip as he twisted the bull’s neck and brought him down, much as I controlled my delicious three-meat plate; I sank my choppers into it, and subdued that sucker.