Italians on a mission to share gelato with the world

Italian immigrants are responsible for turning Americans on to one of our country's most beloved foods, pizza. This time, they've shared another of their wonderful Italian artisan foods in hopes that more of us will open gelato shops. 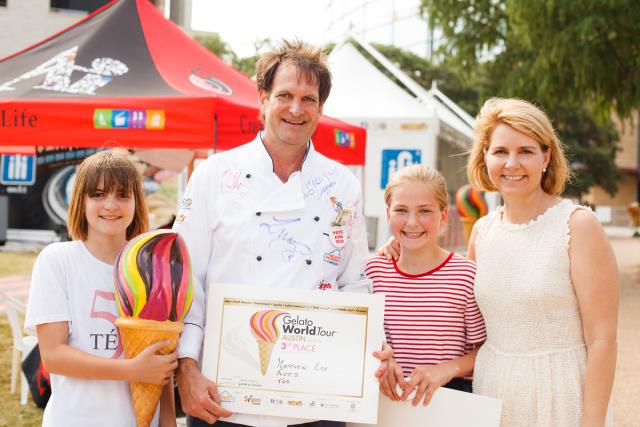 The Lee Famimly: Louise, Matt, Alexandra, and Anna (Photo by Jake & Casey Holt)
That's right, that was the method to their madness. The Italian Ministry of Foreign Affairs joined forces with Carpigiani Gelato University and many of the large corporations that provide equipment and supplies to the gelato industry worldwide to promote their beloved artisan food product around the world. At every stop on the tour, they hold competitions and offer demonstrations on how to make gelato, as well as providing a showcase of all of the top-of-the-line equipment necessary to make gelato and set up a shop. The tour culminates in Rimini, Italy, Sept. 5-7, for the World Finals.

I was lucky enough to be invited to be part of the Technical Jury overseen by chef/restaurateur Damian Mandola that included the following: Uchi/Uchiko Culinary Director Philip Speer; Dallas chocolatier Kathryn Clapner; milk and ice cream expert Dr. Robert Bradley of the University of Wisconsin; Los Angeles blogger Kelly Bone; Dessert Professional magazine editor Matthew Stevens; Italian Consul in Texas, Fabrizio Nava; and American-Statesman food writer, Addie Broyles. We tasted the 16 flavor finalists in the North American category and our votes made up 40% of the total, with another 50% coming from the public vote, and the final 10% coming from the gelato artisans themselves.

The top three gelatos moving on to the finals are:

Things I learned while judging:

* It's possible to put too many different flavors in a gelato base, making for a busy scoop that misses the mark.

* In the right hands, an avocado basil gelato can be a smooth and sensual thing - also a judges' honorable mention.

* There are more than 39,000 gelato shops in Italy and thousands more in other European countries, but only 900 in North America.

* Our charming Italian hosts seemed surprised that many of the gelato shops in this country are run by women and families.

* Even though the event was sponsored by companies who make gelato bases, nut pastes, and flavorings, many of the artisans in the finals described making their own bases and using milk, cream, cheeses, fruits, herbs, and nuts that are local and organic in their areas.

* Matt Lee and his family of Teo Espresso, Gelato & Bella Vita (1206 W. 38th) are prime examples of that trend. Drop by for some gelato, and wish him good luck in the finals.