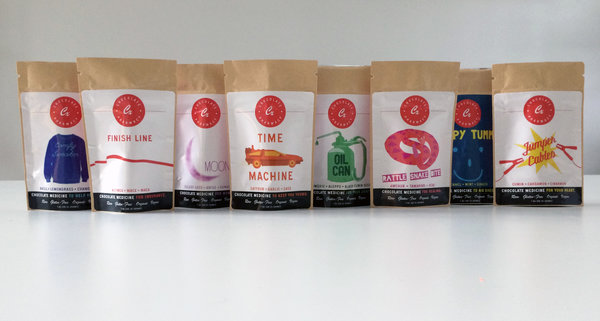 For most chocoholics, the love of chocolate is intertwined with a twinge of guilt, if not a full dose of anxiety about sugar, fat, calories, plus other added substances. Austin yogis, Jyl Kutsche and Amy Pancake, may have found a solution to this problem

These two friends dreamt of a chocolate not currently found in stores, without the additives people react to, either physically or emotionally. Thus was born Chocolate Pharmacy, where pure raw organic chocolate meets spices leading to truffles rich in health benefits and packed with taste. Their Paleo Certified chocolates have no sugar, gluten, dairy, nuts, or soy. They use Peruvian heirloom Criollo cacao, one of the best in the world.

When I received the email about the product, I was both curious and a little skeptical. Spices in chocolate? Sure, I had tried chili chocolate, but these had everything except chili. Having attended Kutsche’s Yoga of Chocolate class, I knew her love extended beyond just quality dark chocolate to socially responsible practices. So, I decided to give it a try. 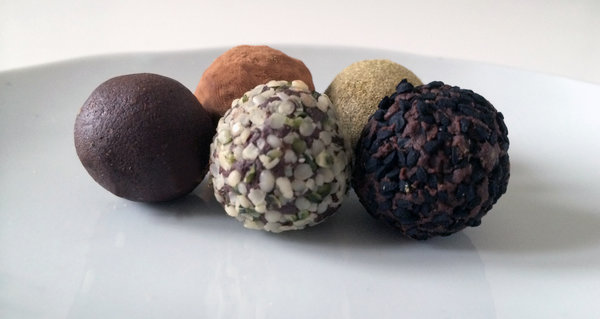 My chocolates arrived in a few days, one sample of each of their eight truffles. The ingredients reminded me of the colorful spice shop I had visited a few years ago in a Persian bazaar, where baskets carried a rainbow of spice mounds. The treats were cleverly named based on the health effect of the ingredients: Jumper Cable, Time Machine, Happy Tummy, etc. Happy Tummy, for instance, has mint, fennel, and ginger – mom’s remedy for an upset stomach.

Then came the moment of tasting.

I chose Time Machine as my first, because the label listed an ingredient I grew up on: saffron. It also listed garlic and sage, combinations that should never work with chocolate. Cautiously, I opened the bag, took out the truffle, cut it in half, and tasted it, expecting the bitter of the dark chocolate and sage to sting my palate. I was wrong. It tasted neither bitter nor sugary sweet. Rather, it exuded an opulence of layers. First appeared a hint of sweetness. Then the warmth of the garlic peeked through, only to give way to the radiating coolness of sage, which lingered long after the chocolate had melted away. These women have an extraordinary gift of sensory intuition, perhaps owing to yoga, in knowing how to combine the right ingredients. It was in the second bite, however, that I unearthed the magic, a stratum beyond the dancing flavors, health benefits, and low calories. The truffle had soul, something none of my “over-the-counter” chocolates had ever offered.

It had a home-cooked side to it, nourishing and sensual. I could taste the care gone into making it. Patients usually ask for treatments a doctor would recommend to his mother, if she were in their shoes. This is the chocolate Kutsche and Pancake would give to their moms, or children for that matter. It is their best. Hidden in the tiny truffles is the uniqueness much like what makes granny’s oatmeal cookies impossible to replicate. In each bite, the chocolatiers’ essence, care, and love caress the taste buds to leave us with a sense of well being. 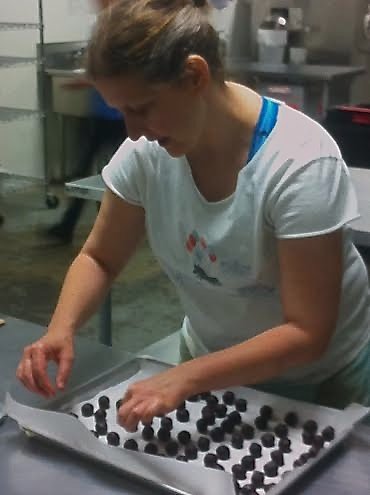 Chocolate Pharmacy’s truffles are a yoga (union) of east and west, sweet and savory, health and pleasure.

Jyl Kutsche: A yoga practitioner for the past twenty years, Jyl’s fascination with chocolate started as a child.  But over the years, her taste buds evolved from non-discriminative consumers of sweets to connoisseurs of the bitterness of dark chocolate. Before teaching yoga, which she has been doing for twelve years, she owned a clothing and chocolate store called Therapy on South Congress. That’s when she really delved into the health benefits of chocolate. In her travels to India she learned about the goodness of spices through Ayurveda.  “I started developing a fantasy of mixing chocolate with spices.”

Through her community yoga center, where she provides access to yoga for those who can’t afford a studio membership, Jyl met another yoga teacher who shared her passion for the food of the gods. A year ago, the two sat down at Thai Fresh and decided to bring something special to the world. Inspired by the work of Dr. Bharat Aggarwal, who had published a book about the healing powers of aromatic spices, they began their research.

“Who makes the chocolates?” I asked, in search of the essence I had tasted. “For now, Amy and I are the chocolate elves in the kitchen. I’m sure we will add more staff as time goes by.” Jyl believes in playing with your food. "We want to take people beyond their comfort zone and invite them to experiment with their chocolate. We want to extend how chocolate feels beyond M&M’s. Our recipes on Facebook encourage folks to use the truffles as more than just dessert. Mix them with balsamic vinegar in salad dressing, for example. If you like cheese, you must try them on a grilled cheese sandwich with Brie. The fat of the Brie absorbs the flavor of every single spice. Crunchy, soft, sweet, savory. It’s heavenly. I think chocolate should be the sixth food group,” she concludes with a chuckle.  I agree wholeheartedly.

Amy Pancake: Also a yoga instructor, Amy grew up in New York working with her mother, the owner and chef of a French restaurant in Long Island. “I grew up sitting on countertops snipping green beans. Mother used to know the farmers who sold us the products by name. Food became a part of us. So much so, that my sisters and I communicated through food. When we were excited, we’d cook for each other or share a recipe.” But her chef gene remained dormant until a few years ago, when one day she woke up and just had to make chocolate in a jar. She laughs at the simplicity of her early recipes. Soon she started making more complex dishes involving chocolate.

“When Jyl approached me, I was more than happy to partner with her. And since its inception, the product has been a yellow brick road. Things just happen in the right direction.” I asked how they settled on the spices. “After months of research, we made a chart of health benefits and chose the ones with the most overlap.” Amy's mom contributed to their venture by helping them find the heirloom Criollo from Peru.  After tasting Criollo, there was no going back.

Instead of sugar, they chose Yacón syrup as a healthy substitute.  Yacón is a perennial plant with tuberose sweet roots. The natural sugar in it, oligofructose, has a very low glycemic index.  Amy noticed the way the chocolate harmonized the seasonings. Rather than competing, it acts as a backdrop that balances the flavors. I wanted to know at what point in the process the truffles are heated. They aren't. The chocolate embraces the spices through blending only.

Amy goes on: “We want people to know they don’t have to sacrifice taste for the sake of eating healthy. We are here to show them the possibilities.” She asked me to drop a Finish Line truffle in my coffee. “Just see what happens.” I did, while writing this article, and I must confess it gave a new dimension to what I thought I had already perfected.

Derek Dollahite: Endearingly referred to as “our token male” by the ladies, Derek is the man behind the witty names, creative website, and playful packaging. He is a freelance web designer as well as a yoga practitioner who offered his services when he heard the idea. “I wanted to help communicate the sensation of this wonderful product in one glance.” He hoped to show people that they can see chocolate not as a guilty treat, but a healthy one. “Be patient with the truffle. Let it melt on your tongue, and you can feel the different flavors.” Spoken like a true yogi.