courtesy Clutivate PR
Participating in the Citywide 86'd competition has become quite the staff team-building exercise in some of Austin's most high-profile kitchens. Now another group of four finalists is set to compete for some serious prizes in the finals.

After holding the third round at the Central Market Cooking School as an ancillary event to the recent Austin Food & Wine Festival, the Chopped-style cooking contest was back at home in the demonstration kitchens at the Auguste Escoffier Academy of Culinary Arts (6020-D Dillard Cir.) for round four. The contestants were the following: Josh Madden, representing Swift's Attic; Melissa Moss,representing Lenoir; Murphy Parks, representing Searsucker; and Hunter Treat, representing Cafe Josie. Round one ingredients (courtesy Cultivate PR)

The judges for this round were Vilma Mazaite, advanced sommelier and managing partner of LaV; Home Slice Pizza co-owner, Jen Strickland; former Austin Chopped champion Jason Stude of Second Bar+Kitchen; and FOX7 television personality Lauren Petrowski. They were presented with plates of appetizers, entrees, and desserts based on mystery bag ingredients and chose the winner of each round based on taste, presentation, and best use of mystery ingredients. 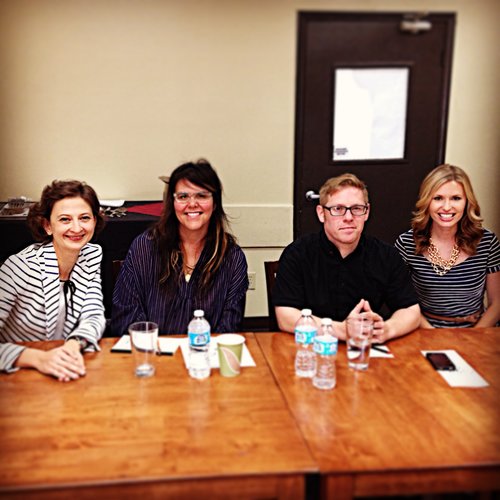 The mystery ingredients for round one followed the theme of challenging the contestants to deal with a live protein; cooks in earlier rounds dealt with tiny live crappie and live scallops in the shell. This round, they were presented with live crawfish, purple corn drink, green tomatoes, squash blossoms, and blue corn masa. Josh Madden of Swift's Attic was eliminated and the others moved on to the entree round. 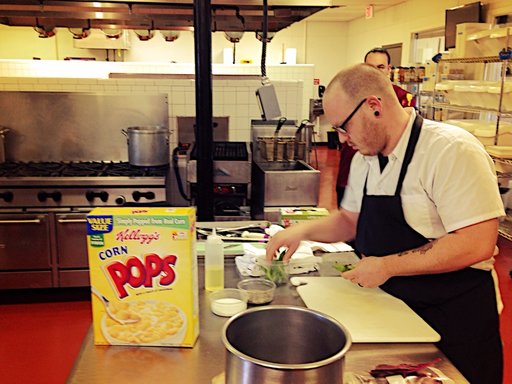 Hunter Treat of Cafe Josie was eliminated and the final two cooks moved to the dessert round to work with huckleberries, Dos Lunas Classico cheese, spicy Corn Nuts with lime, edible flowers, and blueberry muffins. Melissa Moss was eliminated from this round, leaving Murphy Parks of Searsucker as the winner and last finalist. Winner Murphy Parks of Searsucker is congratulated by the judges. (courtesy Cultivate PR)

Parks will join other preliminary round winners Lauren Ortiz of Uchi, Bradley Nicholson of Barley Swine, and Ben Schwartz of Uchiko to compete for valuable equipment and stage packages in the finals. This year's finals will be held at the AT&T Executive Education & Conference Center (1900 University) on Monday, June 16 . This event is open to the public and will feature passed bites from Uchi, Uchiko, and other sponsoring restaurants, plus wine and the opportunity to watch the creative magic happen as cooks work against the time clock. Tickets are $75 and we'll let you know when they are available for sale online.