Only one thing missing from the best fest yet

We arrived way early expecting a bitching long line at will-call. Instead, everything was under control and it took us about 90 seconds to get our tickets. We waited in the crowd as the line grew and grew. But again, everything was so much smoother and easier. We headed straight to Mark Oldman’s seminar on how to eviscerate an intimidating wine list. As always, the information was spot on. There were about 15 people who didn’t get there in time to get a seat, but instead of hustling them off, the event people let them stand at the back so they could get the information. The crowd loved it when Mark did his party trick by showing an audience member how to sabre a Champagne cork.

Ray Isle’s class was just as full and they lucked out by having some of Ray’s choices for the best wines in the world. 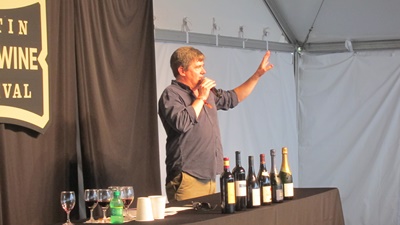 LaV sommelier Vilma Mazaite was not only full of pertinent information but she was utterly charming and displayed the soul of a true wine lover. LaV's Vilma Mazaite with her fans (photo by Emily Marshall)

The Grand Tasting area was also much more inviting. The crowds seemed better managed with, thankfully, no long lines at all. From a food standpoint, we were blown away by Tapas Bravas’ Brussels sprouts, Gardner’s butternut squash with smoked shitake and “beef juice,” Fork and Vine’s fried alligator, Ranch 616’s portable Frito pie, and Teo’s rosemary chocolate gelato.

Our assignment, however, was to cover the adult beverages. After having all the wines earlier in the day, the two drinks that appealed most at the Grand Tasting were also the simplest. Hoegaarden’s wheat beer was a great thirst-quencher, while the Aperol spritz made us believe we were enjoying a warm breeze, sitting along the beach on the Amalfi coast. You can find this drink all over town, but we filmed the perfect preparation. The secret to why his is better than most is that he uses lots of oranges.

Wine lovers had dozens of outstanding wines to choose from. Duchman’s Vermentino was its normal perfect self. Ditto for Duckhorn’s Sauvignon Blanc, Siduri’s Pinot Noir, Treana’s glorious White, and the full line of Antinori’s wines. We were especially interested to finally taste the Château d’Esclan’s rosés. They make their wines with a whole new concept as well as a whole new pricing concept as you can see when I interviewed their Paul Chevalier.

Let me say one more time – in case anyone missed the point in my other missives – it was an embarrassment that the only Texas wine available at this event was from Duchman. 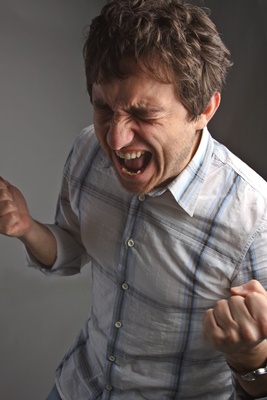 I want my Texas wine and liquor!! (Photo courtesy of Freeimages)
I would say that was an idiotic oversight, except that’s nowhere near the lambasting it deserves. Tito's was there to represent the Texas liquor industry, but if any other Texas distiller was featured, I missed them. Come on, folks. After you have made so many improvements and brought this event up to the standard of your others, how on earth could you make such a bone-headed mistake?

Finally, a word of thanks to the many folks who stopped to let me know they appreciate my efforts. You will never know how much that means and how appreciative I am. Thank you so much for your thoughtfulness.

This was such a jump in quality over the last two years. Let’s hope next year is even better.