The Capital Grille Steaks Its Claim on Fourth Street

And, boy howdy, does it come through with flavors flying 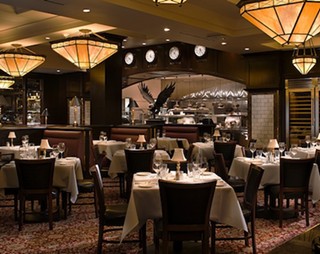 Yes: The Capital Grille, in the heart of Downtown, right where the old Spaghetti Warehouse used to be.

Make no mistake: This is a restaurant for the big ballers, the heavy hitters, the corporate accounts; basically, for anyone who wants to make like an old-school Rockefeller and eat some of the best food available anywhere. You save up your money, citizen-who's-not-a-lawyer-or-a-doctor-or-a-software-mogul, and you could do this for a night: You could be swaddled in an abundance of well-orchestrated luxury and culinary excellence.

Make no mistake: This is a chain restaurant … but so fucking what? The mistake you could make regarding that fact is the mistake recently made by one Natalie Grigson, a web-content stringer for some "quirky" real-estate firm, who tries to crash the city's perpetual nostalgia party with her "30 Things You'll Never See In Austin Again."

Please note the first item from this Grigson's clickbait listicle:

1. THE OLD SPAGHETTI WAREHOUSE
Goodbye, Spaghetti Warehouse; Hello, Capital Grille: an upscale chain restaurant that will probably taste like old cardboard and have the all of the originality of an Olive Garden.

[Because, like, what? Like the Spaghetti Warehouse itself isn't a national chain? And like you've actually eaten at a Capital Grille before cutting loose with your wannabe-snobbish snark? That must be the case, right? Because to do otherwise would be as ill-informed as lamenting Austin's loss of Tower Records without mentioning that building's former incarnation as the Varsity Theatre or its later incarnation as Intellectual Property. (Oh, hold on, you do that too, don't you?) How a person can graduate from a fine institution like St. Edward's University and yet remain sufficiently clueless to affect such a dismissive pose – when not busy insulting Nashville or who knows what else, all the way from her new home in San Francisco – well, that's one of life's little mysteries I won't bother trying to solve.]

Make no mistake: I was invited to the test-run of this Capital Grille place. Me and umpteen other media people and friends of the management and so on: brought into the new dining establishment's sumptuous interiors and treated to its service and its cuisine, gratis, so that maybe we'd crow blogwise and/or printerly about what we experienced and thus generate some good publicity for the joint.

Listen, it's almost embarrassing to have that be the case and then come away with damned little bad to say about the experience. It seems almost suspect – as if one had accepted payola – to, in fact, come away raving about the night's pleasures. But, fuck it: Truth is truth.

Before I went to last Monday night's soft opening, I checked the Capital Grille website and learned that 1) yes, it is a chain, and 2) it's a steak-heavy sort of place. Which made it even more important that my plus-one would be my lovely wife: She's the steak-eater in this family. So I left Chron volleyball early, grabbed Katherine-my-bride, and Downtown we went – into the Capital Grille with its ridiculous "e" on the end of "grill."

I'm telling you: It's like being transported back into the Jazz Age; it's like you're some industrial magnate stepping into Delmonico's with a couple of oil-baron pallies and a hankering for a meal sufficient to celebrate your latest corporate conquest with.

You're greeted, within the Capital Grille's richly carpeted and chandeliered Cavern of Elegance, by a veritable phalanx of hosts and servers – all of whom, once you've checked in, seem to've telepathically grokked your name. Because they're all using it, your name, and letting you know – by word and action – that their existence is, at least during your sojourn within their swanky realm, predicated on meeting your every dining and relaxational need. All the servers are decked out in uniform jackets, all are attentive and buzzing about with make-it-so activity, and … it's a little overwhelming. It's not my sort of thing, really. It's not like going into a restaurant where the waitstaff are like kind and generous friends welcoming you into their home and bringing you stuff to eat and drink. It's more like you're royalty and these are servants and that's an illusion that's going to be maintained throughout your visit. And if one's a working-class journo and creative dilettante and not a big baller, heavy hitter, etc … then it's only an illusion. And if such things sat well with me, if I were into illusions, hell, I'd probably be a follower of some religion or other, too – y'know what I'm saying, Rust Cohle?

Anyway: The service, it is exemplary.

And then we get to the food.

And this is where my head gets schooled and my taste buds have their multiple orgasms.

Because I and a few of my friends – well, mostly Shannon McCormick – we like to work this hashtag: #insdou. And that hashtag stands for Insufferable D'bag. Which, of course, is short for Insufferable Douchebag. And the idea is that we're into some things – haute cuisine, obscure high-brow and low-brow art, vintage jazz, avant-garde theatre and film, and so on – and we move in circles with various local (or beyond) celebrities in those areas – and, when we get talking about any of that sort of thing, well, shit, we sound kind of like insufferable douchebags, don't we? And so we might as well own the term, is the idea. So, as one of the #insdou clan, I'm passingly familiar with the type of culinary brilliance and envelope-pushing that goes on in places like Barley Swine and Foreign & Domestic and Eden East and so on. (Like what I'm talking about here and here.) And Capital Grille doesn't play that game. Capital Grille, the kitchen, is as old-school (read: classic) as its decorative appointments and its style of service.

And, surprise, it's even more impressive.

1) My meal started off with a lobster bisque so smooth and delicious that King Neptune would've paid half his kingdom to ransom it back. That was followed by a Chilean sea bass with heirloom tomatoes and saffron tomato broth that … oh sweet babbling infinity, I've never had a better piece of fish in my life. (When I lived in Florida, my father once took a mako shark that he'd caught off the coast that afternoon and grilled it that evening with just butter and a few strips of bacon across its white steaks; when I was table-waiting at the Magnolia Cafe on Lake Austin Boulevard, our manager, Amped-Up Vince, once baked an amberjack and dressed it with some ambrosiacal concoction he called a "butterfly sauce." Those fish were incredible in their tastiness; the taste of those fish, together, would be barely equal to the hefty slab of bass the Capital Grille set, all buttery and falling-apart-tender, in the midst of what could've doubled as Escoffier's own Bouillabaisse.)

2) My wife opted for the French onion soup and the bone-in, coffee-crusted, dry-aged sirloin with shallot butter. And of course – thank you, Katherine – she let me have some of each. That soup? I've had some good French onion soup, and I've had some mediocre French onion soup. When I was much younger, I had excellent examples in Lyon, France, and in downtown Monrovia, Liberia; Capital Grille's French onion soup matched the memory of those excellent soups. Rich broth, oh! And then that sirloin … It's like this: My wife's chomping away at – pardon me: delicately masticating – the perfectly cooked meat and there's a smile on her face and, I could swear, soft moans of pleasure escaping her lips between bites. So I snag myself one of the beefy morsels she's cut off the main hunk, and suddenly the inside of my mouth is kind of reverberating with pleasure, and I'm like, "God damn, Kat. Remember when you got that steak at Jack Allen's Kitchen a while ago, and you thought it was the best steak you ever had? This one, holy shit, this one is at least that good, isn't it?" "Jack Allen's steak came with gorgonzola butter," Kat reminds me, "and I really love that stuff. But, yes, this steak is at least that good. This is an amazing steak. And it's huge," she added, prodding one promontory of it with her fork.

3. The side dish – Sam's Mashed Potatoes – was good enough that I momentarily considered braving the prep-kitchen DMZ to shake Sam's potato-mashing hand. The various eclectic breads that had preceded our entrées were also made in-house and worthy of mentioning here with at least a parenthetical exclamation point(!) And our dessert that night was a delicate creme brûlée topped with the sort of fresh berries you have to be first in line at the farmers' market to get.

Conclusion: I trust the abovementioned Ms. Grigson will continue with her old-cardboard diet when she's not cheating on it at some Bay-area Olive Garden and leave the Capital Grille – in Austin and probably all its other locations – to people who, when they can afford it*, prefer to send their own tastebuds on a much-deserved vacation to paradise. (Note: Here in the capital of Texas, the Grille's executive chef is Brent Jaeger; please enjoy your stay in Austin, Brent & family, and don't be leaving anytime soon.)

* Check the website: They've got a lunch menu, too, that won't set you back as much; and I'll bet a sampling from that will let you know if you want to move on up to suppertime.