Local cooks competed for a spot in the June finals

Cooks from some of Austin's top restaurants showed up at the Central Market Cooking School early last Saturday morning to compete for a spot in the finals of this Food Network-style cooking competition. From the left: competitors Diciccio, Flynn, Guerra, and Schwartz (courtesy Cultivate PR)
Contestants this round were John Diciccio from Congress Austin; pastry chef Derrick Flynn from La Condesa; Vincent Guerra from Barlata; and Ben Schwartz from Uchiko. They were given the first set of mystery bags and 25 minutes to create an appetizer from frog legs, daikon kimchi, Mrs. Baird's white bread, baby arugula, and creme de cassis. 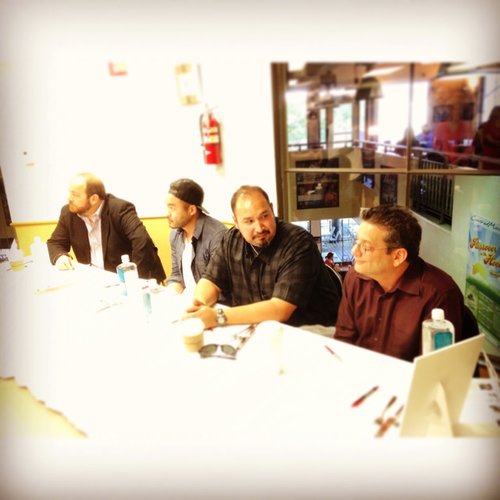 The appetizer plates were presented to a panel of judges that included visiting comedian Andy Kindler, radio personality and print journalist Andy Langer, local restaurateur and Top Chef winner Paul Qui, and chef Jesse Perez of Arcade Kitchen in San Antonio. Based on scores for taste and presentation, Diciccio, Flynn, and Schwartz moved on to the entrée round.

Ingredients for the entrée round included live scallops in the shell, collard green seed pods, onion scapes, original flavor Aqua Crisps, and Mill-King milk from a Central Texas dairy. Most of the produce was provided by local farms. Best I could tell, no one in attendance had ever seen a collard green seed pod, much less cooked with one, but when I checked with a farmer friend later, I was assured that every part of those leafy greens is indeed edible.

Derrick Flynn and Ben Schwartz put out the best entrée plates and moved on to the dessert round, where they encountered green strawberries, a sparkling pineapple cider called Tepache, dill blossoms, saltine crackers, and pistachios. Schwartz pulled out the molecular gastronomy toys and whipped a pale green ice cream out of the strawberries and went on to take the crown. He'll join three other preliminary round winners at the finals in June at the AT&T Executive Education & Conference Center. 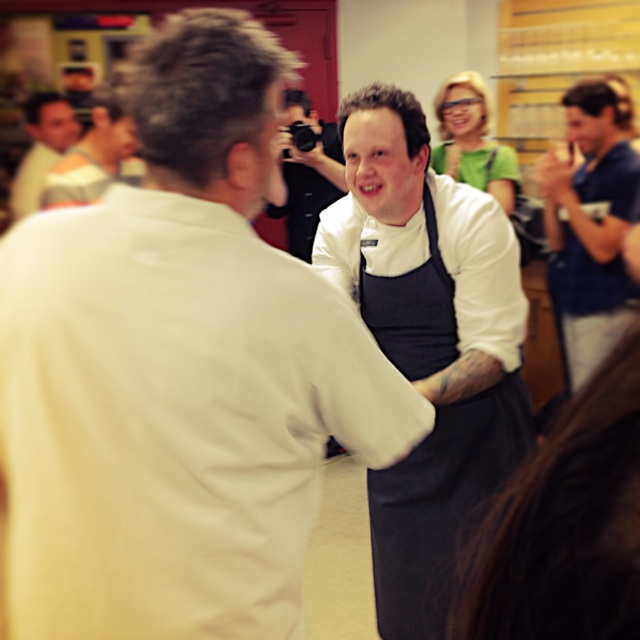 This competition obviously teaches aspiring chefs that they need to know how to think on their feet and apply the best of their skills to any ingredient. However, the thing that impresses me most about it is the team-building and camaraderie involved. Uchi/Uchiko co-owner Daryl Kunik was there cheering on his troops as was Congress Austin exec chef David Bull. There was also a room full of restaurant staff members supporting their co-workers. That sense of community and emotional investment makes a very difficult and physical line of work more bearable on a day-to-day basis, and that's very appreciated in the restaurant business. The fourth and final preliminary round of this year's Citywide 86'd takes place this Saturday morning, back at its home at the Auguste Escoffier School of Culinary Arts (6020-B Dillard Circle). It is not open to the public, but the finals coming up in June certainly will be and that should be quite an evening. Last year's winner, John Hajash, won a two-week, all-expenses-paid stage at a restaurant in New York City and has since seen some advancement in his career.