Eateries along Barton Springs' restaurant row have new neighbors with the opening of Barton Springs Picnic trailer park. The new park not only boasts eight of the most highly rated food vendors in Austin, but also paved parking, air-conditioned restrooms, picnic tables, and covered pavilions to make guests feel comfy during their visit. 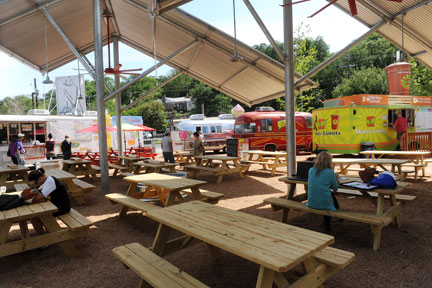 Covered seating at the Picnic (Photo by John Anderson)
“We tried to make this much more of a convenient and nice environment to come to,” park co-owner Alastair Jenkin said. “It’s easy to park your car, easy to wash your hands, or go to the bathroom – the basic things in life that the trailer parks have been lacking.” 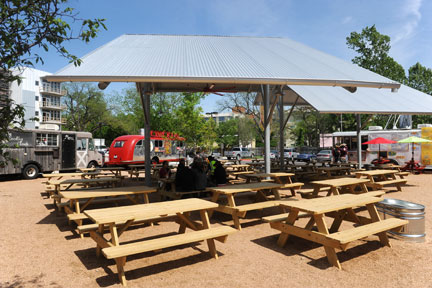 
The park sits just south of the Coldwater Apartments, a luxury project that is expecting its first tenants this spring. Jenkin, along with partners Christian Brooks, Ronnie Brooks, and Kurt Simons, originally had a site development permit for a stand-alone restaurant, and were approached by several national chains who wanted to set up shop on the desirable Barton Springs real estate. “We had offers on the table to do a deal like that and we just decided in the end it wasn’t the right feel,” Jenkin explained. “We wanted to do something a lot more local.” 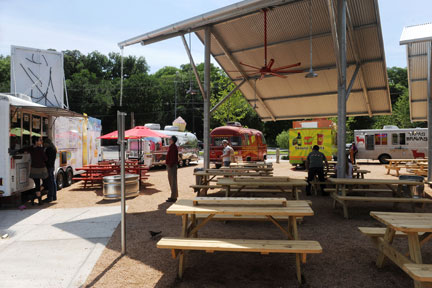 
The partners agreed to find some of the best in the business who could live in the same trailer park without stepping on each other’s culinary toes. Jenkin sought out owner Ralph Gilmore of Turf N’ Surf Po-Boy , which started as a trailer at Second and Congress and got moved around before eventually buying part of Lavaca Street Bar. Gilmore's family has a serious a food legacy in modern Austin, what with his brother being Jack Gilmore of the two Jack Allen's Kitchens and his nephew, chef Bryce Gilmore, being the creative force behind Barley Swine and Odd Duck. Gilmore said Barton Springs Picnic is giving trailers a chance to put their focus on serving good food with great exposure. “I think it’s giving back to the neighborhood and giving back to the city,” Gilmore said.

Similarly, Jenkin said that the idea behind Barton Springs Picnic was to give trailer food vendors peace of mind about their livelihood. As developers come in and replace open land with hotels and condos, food trailers are often forced to find new homes. The amenities built out for the trailer park are not only for the patrons’ benefit, but to also give the place a sense of permanence. 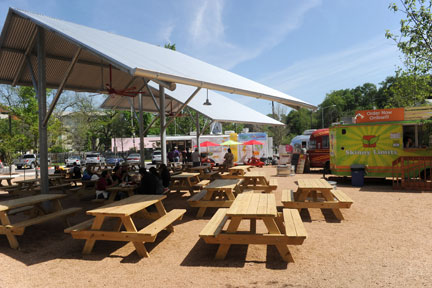 
“Ten years from now, this whole food trailer scene is at risk of being not a factor in the Austin landscape,” Jenkin said. “This is not interim land use. Our goal is not to put it here for two years while we figure out what restaurant to put here. Our goal is to have this as a viable business.”

Barton Springs Picnic trailers like Mighty Cone and Hey Cupcake! know what it’s like to be displaced for construction, having lost their spaces in the South Congress trailer park to a hotel project. Although Hey Cupcake! found a new home just a block north of its original lot, cupcake slinger Noah Peacock said it’s fun to also have a space among friends.“It’s kind of reminiscent of when we were part of the SoCo park,” Peacock said. “It’s nice to be around other vendors.”

Patron Suzanne Haenn chose Barton Springs Picnic for her birthday dinner, and brought three generations of her family under one pavilion to help her try selections from multiple vendors. “It’s nice and accommodating,” Haenn said.

Other patrons like Robert Bailey come because of the park's dog friendliness, meaning he can bring his party schnauzer Riley to dinner with him. Bailey had only known of Hey Cupcake! when he first tried Barton Springs Picnic, but the options and atmosphere have brought him back several times since.

Although vendors might decide that Barton Springs Picnic isn’t the right fit for them, staggered leases ensure that patrons will always have plenty of choices. The park also plans to host special events – block parties, if you will – but details are yet to come. 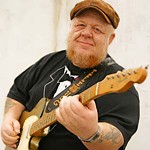