And the Stars Realign 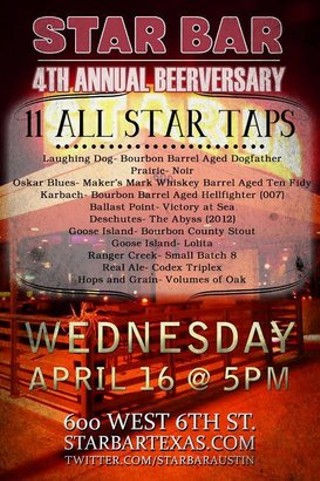 “Yeah, I heard you can drive through Lubbock, roll down your window, and Texas Tech will throw a degree in,” said the asshole, his lips upturned in a smug smile. Immediately self-conscious, I wanted to disappear through the floor. It was 2005, at Star Bar, and it was the last time I would venture to that bar.

That is, until now.

Star Bar’s annual Beerversary party is tonight and marks the bar’s fourth year of serving craft beer on tap. When ownership shifted in 2010, so did the bar's emphasis on better brews. Now an aspiring craft beer bar, over the last four years the bar has been working to offer a well-curated and diverse selection. Celebrating the shift and honoring the occasion, the bar is slated to offer a selection of rare beers for the event. In addition, many of the brewers will be on hand to answer questions and mingle with guests. Star Bar will also be offering five-ounce pours for easy sampling.

Here’s what the 11 taps will be pouring: