Although it might be easy to miss at first glance, one of the houses along E. Cesar Chavez recently opened its doors for guests to stay awhile. Entrepreneurs Greg Mathews and Jade Place Mathews teamed up with friend Jill Bradshaw to open Friends & Neighbors, a chic boutique and café offering hand-picked accoutrements for every room of the house. 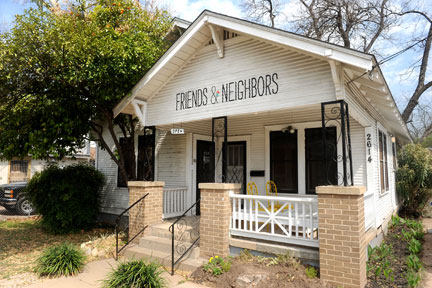 “We want people to feel comfortable, to have a stroll through and grab some wine, or bring a computer and invite their friends and dogs,” Place Mathews explained. “It’s just like your friend’s house.”

Granted, most of us don’t have friends pulling shots from a turquoise La Marzocco espresso machine in their kitchen, but natural light fills the room with a sense of warmth and that homey, welcoming notion is perpetuated behind the bar by Mercedez Singleton. Singleton formerly managed Marlow & Daughters, a market and butcher shop in Brooklyn. She is now the one to thank for the selection of pantry items available at Friends & Neighbors, as well as the placards that tell each vendor’s story. If you buy a jar of Queen Majesty Hot Sauce from Singleton, you’re also learning that the Brooklyn sauce maker doubles as a reggae DJ. “I imagined we would be an efficiency grocery store, but then during product testing, I ended up deciding to broaden the scope of items by choosing products that are harder to come by in this area of the country,” Singleton said. “As a Brooklyn expat, I chose some things that are home comforts that aren’t here.” 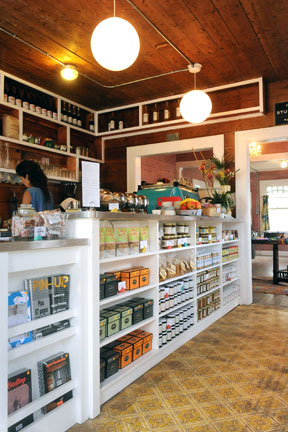 Among the Topo Chico bottles, Stumptown coffee, and selection of wines and beers, Singleton has brought in some of her favorites like Italy’s il mielle della vita honey, Portland’s Smith tea, and Brooklyn’s Early Bird granola to share with local friends. Visitors can also grab a selection of snacks from the counter to enjoy in the backyard, including Siggi's Icelandic yogurt cups, vegan Red Rabbit baked goods, bowls of nuts and olives, and a smoked oyster plate served with crackers, a lemon wedge, plus salt and chili flakes – one of Place Mathews’ favorite snacks when she lived in Australia. The team is currently planting a small garden in the backyard to provide inspirational ingredients for future drinks and menu items. 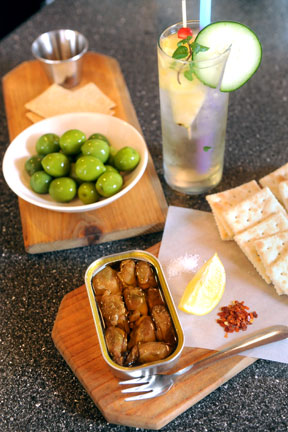 Snacks and refreshment at Friends & Neighbors (Photo by John Anderson)

The front rooms reflect Jill Bradshaw’s expertise, with vintage garb, craft dishware, and jewelry handpicked by the former owner of Manhattan’s I Heart boutique. The bedroom in the back serves as a dressing room, with textiles draping from the walls to create private dressing tents and a wardrobe full of lingerie selections. The bathroom showcases skin care items by Fat and the Moon, and across the hallway is a display of dip-dyed bed linens and Balinese textiles created by Bradshaw’s friend’s Australian brand SUKU.

A side bedroom carpeted with Astroturf and painted sky blue gives Bradshaw room to dream as it will transform seasonally, first as a kids room featuring children’s vintage clothing and toys, then later as a music room, a book room, or whatever findings she wants to share with their customers. “Each room for me has a distinct idea,” Bradshaw said. “You’re taken through kind of an experience – there’s a fantasy element.”

Although all four collaborators still have their New York phone numbers, the new kids on the block focus on being respectful to the historic neighborhood and its longstanding residents. The façade of the 1930s white bungalow remains largely unchanged except for their logo painted on the gable. Inside, linoleum was yanked from the floors and faux wood paneling was stripped off the walls to expose its original shiplap wood.

“I think the build-out was longer and a lot more involved than we initially expected,” Place Mathews said. “There are a lot of health codes to change it from residential to commercial. We had to push back our opening time.”

Friends & Neighbors officially opened on March 12, and those who have put countless hours of turning the concept boutique into a reality are pleased with the local response. They share a fence with Bud's Motorcycle Shop next door and their initial nerves about opening up next to a bike shop were quickly abated when the neighbors offered to build and weld what they could to help get the new store ready. Once Friends & Neighbors was open for business, Singleton was more than happy to serve an iced Americano to one of Bud’s mechanics.

“One of the things that I’m anticipating to be one of the joys of putting in a lot of hard work is to watch and see a small customer base build,” Singleton said. “To me, I’ve helped open a business before, but actually putting some blood, sweat, and tears into it is so rewarding and so exciting.”

Singleton keeps a notebook of customer suggestions for pantry items they’d like to see on the shelves. As they consider expanding the menu with more items to be enjoyed in the shop’s table-studded backyard, Place Mathews points to the shed as another future project. Possibilities there include a space for film screenings or a potential workshop. 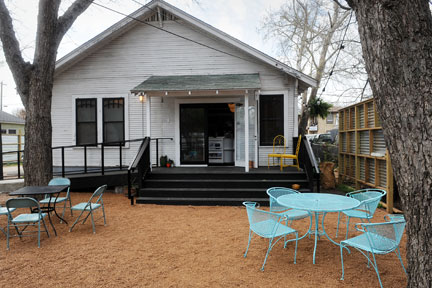 This house was the first and only property the business partners considered when they first came together with the idea of Friends & Neighbors. Although they expect more commercial neighbors moving in, including Rainey Street bar Lustre Pearl’s future relocation to the ‘hood, they purposely picked a location that’s currently a bit off the beaten path, to give it the opportunity to come into its own. “I think if we were a few blocks west we’d be in the middle of it,” Mathews said. “This gives us time to grow into the space, so that when it does catch up to us, we’ll be ready.”