Doing It Their Own Way at Whisler's After many years of working in other people’s bars, Scranton Twohey decided to open his own place and run it his own unique way. That's what has attracted some of Austin's best bartenders to the staff at Whisler's. Whisler's on East Sixth (photo Gracie Salem)
With hardly any signage on East Sixth and a website so devoid of details it borders on mysterious, it may seem unlikely that in less than a year Whisler’s has made press-fueled short lists statewide and a classy splash in the competitive world of Austin’s bar scene. But when you understand the simple way Scranton Twohey runs Whisler’s, it’s no surprise at all. 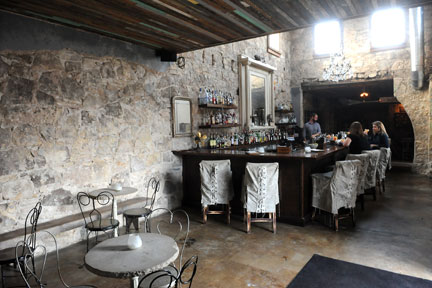 “It is the staff that makes the business,” says Twohey. “They represent you. And when I started, I just wanted to promote the staff.” When word got out that Twohey was opening a bar last year, he didn’t have to look very hard for staff – they came to him. “It took me by surprise, but people really just wanted to a part of this experience.” His current roster of talent includes Joyce Garrison, Mia Kersten, Jenna White, Matt Ross, Sean Skvarka, Mike Phillips, Ben Harris, and manager Cesar Aguilar.

“When I bartended, it was about money, man!” Twohey laughs. “I wanted to make money! But what I’m seeing now with bartenders is that they are always seeking that awesome job. Now, it’s not so much about the money, but about working in an awesome establishment alongside talented people. So the pressure is on for me to create a place where people don’t want to leave. We want it to be a family.” Giving his staff creative freedom is one of the main tenets of his business model.

“This was the next level of growth for me,” says Joyce Garrison, who left a very high-profile job at the W Hotel to tend at Whisler’s. “I wanted mentors. Here, we’re all learning together.” 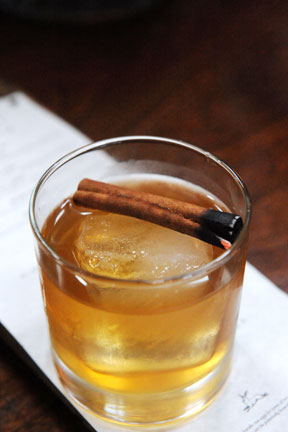 Whisler’s looks at a drink in four ways before it makes the menu: seasonality, how efficiently or quickly it can be made, the drink’s cost effectiveness, and, of course, says manager Cesar Aguilar, who came to Whisler’s from La Condessa, “Is it delicious and [does it] represent us well?” But it is the bar staff that brings new drink recipes to the table and ultimately creates each new drink list.

Understanding cost efficiency is up to the tenders, too, such as deciding what to pre-batch and what to make to order on a busy weekend when volume matters most. How many moves it takes to make a drink is considered as well. “It is simple economics,” says Aguilar. “The more drinks we can make, the more money. We are a volume bar that has craft tendencies.”

To keep costs in line with all the high-end, expensive ingredients, two prep shifts a week are dedicated to juicing and making all the intricate syrups and ingredients. “I actually really enjoy those shifts,” says bartender Ben Harris. “Put on some rock & roll and juice.”

“It all starts behind the bar. And Scranton gives us a lot of freedom to experiment,” says Harris. “It’s a lot of freestyle – remembering what people liked and what worked. Tweaking it with other bartenders. That’s the fun part for me.”

“It is scary as an owner to give the staff freedom,” says Twohey. “I never had freedom at any place I worked. But I wanted to do what I wanted to do and take that risk.” He aligns the freedom he gives his staff with the creativity he wants to inspire in his own sons, ages 6 and 7. “I want everyone to create. And that starts with the bar staff making the drink list.” The Last Word (left), made with gin, lime, Chartreuse, and Maraschino liqueurs, and the First Kiss, made with raspberry, mint, rum, and champagne (Photo by John Anderson)

While mostly known for its creative drinks, Whisler’s prides itself on also happily serving someone a shot and a beer and trying to keep the drinks around the 10-dollar mark. Wanting to bring a new cross section of client to the Eastside bar row, Aguilar says, “We hit that sweet spot and people don’t bat a lash because of the staff.”

Sitting for just a short time with only a small slice of the people from Whisler’s, it’s clear that something different is going on here. Twohey and his staff have a sharp sense of mission, which is to create an amazing experience. It’s not just clocking in and clocking out and clearly much more than the money made on a Saturday night.

“We’re allowed to be creative, cutting edge,” says Aguilar. “We all think progressively about our bar.”