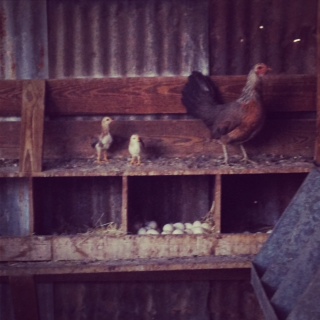 The fourth annual Foodways Texas Symposium. This year’s “Farm to Market” program was held at the Agrilife Center on the Texas A&M campus and provided attendees with the opportunity to explore and learn about agriculture through various lenses. 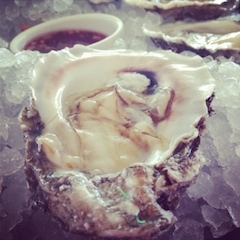 The event commenced on Thursday night with a welcome dinner at The Veranda, with a “Texas Spring Picnic” dinner provided by Molly McCook of Ellerbe Fine Foods in Fort Worth. The menu included chicken-fried quail and a potent whiskey pound cake, showcasing Texas ingredients from start to finish.

Indeed, each meal over the weekend laid bare the embarrassment of Texas riches in terms of both ingredients and culinary talent. Friday morning’s breakfast, courtesy of Brian Light of Ronin Cooking, featured empanadas made with Longhorn beef (because College Station), while breakfast on Saturday was curated by Austin’s Stephanie McClenny of confituras, who paired her spring jams (including the brand-new ruby red grapefruit jelly) with irresistible rafts of grilled Texas toast from Dallas’ Empire Baking Company and goat cheese from Blue Heron Farm. Friday’s lunch, courtesy of Randy Evans of Haven in Houston, featured Gulf Coast delights including briny appellation oysters and a mouthwatering sauce piquant plump with Texas shrimp. (Our table also tore through three servings of dessert, a tipsy strawberry trifle stuffed into large mason jars.) On Saturday, Jesse Perez of Arcade Midtown Kitchen in San Antonio offered up a “Winter Garden Luncheon” featuring an absolutely stunning plate of roasted chicken and sweet potatoes, along with lamb shank, meaty mushrooms, and coarse yellow grits. On Friday night, dinner came courtesy of Lenoir’s Todd Duplechan, who wowed us with a smoked porchetta dish accompanied by a hearty peasant bread and refreshing end-of-season beets. 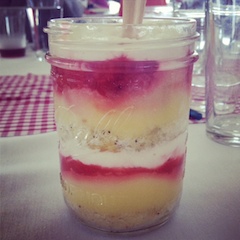 While our bodies were nourished by Texas ingredients, our minds were nourished by the various thought-provoking topics. Friday’s program was more loosely organized, focusing on agricultural products like wine, olives, and grapefruit, as well as an introduction to Robyn Metcalfe’s intriguing new project, The Miracle of Feeding Cities. I was particularly moved by Saturday’s program, though, which hewed rather more closely to a single topic: the rice industry in Texas.

First, Todd Romero, a history professor at the University of Houston, gave a talk on Saito Saibara, a turn-of-the-century ex-samurai who became a successful rice grower in South Texas before the racist immigration policies of the early-to-mid-20th century squelched his ambitions. Next, MM Pack moderated a panel dedicated to teasing out the nuances of water usage and conservation in Texas and how that relates to the rice industry.

Perhaps the most profound example of this troubled relationship came when Jack “Jacko” Garrett, a Houston-area rice farmer who founded Share the Harvest, a charitable organization that has donated millions of pounds of rice to the Houston Food Bank, accepted his Lifetime Achievement award. He explained that because water consumers in urban areas fail to conserve water in any meaningful way, this will be the first year in decades that his father’s farm will produce no rice because there simply isn’t enough water available. As a result, the Houston Food Bank will receive 800,000 fewer pounds of rice from Share the Harvest this year, which adds up to 8 million servings. It is profoundly humbling to reflect upon the connections between hunger and people’s dedication to maintaining their emerald-green lawns. It’s easy to think of water being a problem people in third-world countries have, but we can no longer deny that it’s a social justice issue here in Texas as well.

Also of note was the closing panel, moderated by Austin’s Kristi Willis, who led three urban farmers in a discussion of their operations. Max Elliott, of Urban Roots in Austin, James Jeffers of Eat the Yard in Dallas, and Colleen O’Donnell of Plant It Forward in Houston all described the ways that their farming programs yield positive change in their communities. Not only does Urban Roots teach at-risk youth critical leadership and life skills, but the farm also donates thousands of pounds of produce to the Capital Area Food Bank and Caritas each year. Eat the Yard, which was founded by two Army veterans, reaches out to veterans who are in need of immediate therapeutic interventions, and Plant It Forward helps out immigrants and refugees through its gardening programs.

In between all the eating and the learning, there was community-building to boot. There were many lively discussions floating around, from how to best manage one’s cast iron collection to the best menu item at Austin's El Patio. I can’t imagine a better way to spend a weekend than surrounded by people who love food: the growing, preparing, and sharing of it. Here’s to many more weekends like this one. 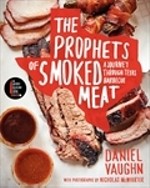