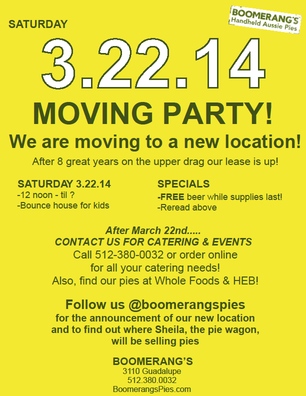 Party invitation (courtesy Boomerang's)
After eight years as a fixture on the Drag north of the University of Texas campus, Boomerang's Aussie Pies is moving. They are hosting a bash to celebrate, and you're invited.

As fans of Boomerang's know, the Austin company was founded eight years ago by Jack and Emilie Fennell after they fell in love with the handheld pies on a trip to Australia. They created a product line with traditional Australian fillings as well as some Southwestern and vegetarian flavors to appeal to spicy food lovers and the health-conscious Austin market, and soon had a hit on their hands. They then expanded in to the wholesale market, placing pies in H-E-B stores statewide and the nationwide network of Whole Foods Markets. Along the way, they picked up a food truck for off-site events and catering.

Within the past year, "Pie Guys" Jack Fennell and business partner, Lance McInnes, brought in Brian Keffer as operations manager with an eye toward expanding and possibly replicating the restaurant side of the business. The company had been on a month-to-month lease while they looked for a new space in which to create a flagship store, but they were unable to accomplish everything before their landlord found a new tenant for the Guadalupe street space. So, Boomerang's retail outlet will be closed for a few months while the new restaurant gets up and running. Boomerang's pies will still be baked and packaged in a commissary kitchen, and will continue to be available in all the popular retail outlets that carry them now. The company is also still available for catering and special events with Sheila, the faithful food truck. We're told there should be big announcements about new location and more retail sales outlets in May. 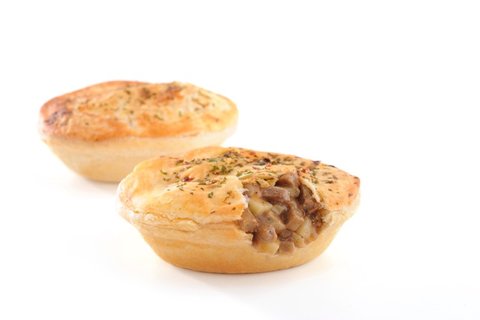 In the meantime, drop by Saturday for a hot pie and a free beer (while they last), and follow Boomerang's on social media to discover when and where they'll reopen.