I've never been able to muster much enthusiasm for the films of Wes Anderson. I didn't attend the recent local premiere of The Grand Budapest Hotel and I might not have seen it at all if it hadn't been for an invitation to the Alamo Drafthouse feast created to complement the movie. Turns out, I was totally charmed by both. 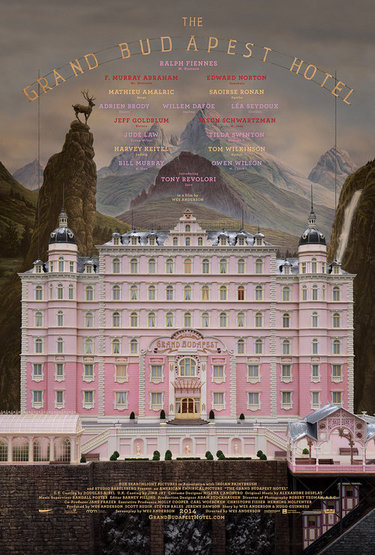 UPDATE: For a video tutorial on how to make the fictional Courtesan au Chocolat, go here.

I arrived at the theatre with little advance knowledge about the movie other than that it was set in Eastern Europe and starred Ralph Fiennes as hotel concierge M. Gustave. I have a soft spot in my heart for great old hotels, having worked in a couple during my early career as a waitress and later as a pastry cook, so I was at least curious about that aspect of the story. And I've always loved the way the Alamo chefs have held up the long tradition of movie feasts we started with the early Eat, Drink, Watch Movies series back in the days when Alamo theatres had only rudimentary kitchens and no chefs at all.

Chef Trish Eighelberger went to a great deal of trouble matching her menu to the film, going so far as to serve bowls of (very tasty) prison gruel as an amuse bouche and consulting with the food stylists hired by Fox Searchlight on the recipe for and packaging of the all-important Mendel's Courtesan au Chocolat. The dishes were timed appropriately throughout the film, ending with each guest receiving an individual split of champagne and a pink box of pastry, tied with ribbon. 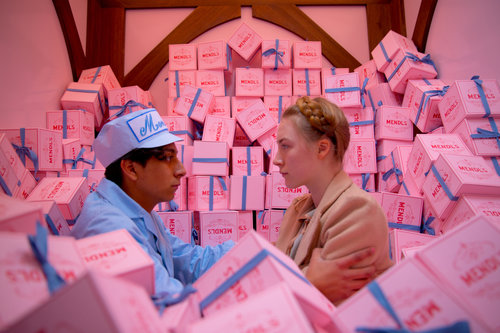 The hero, the heroine, the pastry boxes (courtesy Fox Searchlight) 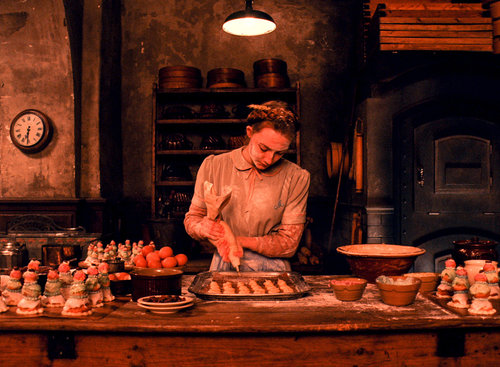 I was charmed by the hotel in both grandeur and decline and the scenery chewing by Anderson's rogue's gallery of character actors didn't bother me the way it usually does. The film had a Thirties madcap pace and the effortless charm of Fiennes' M. Gustave made the evening evaporate quickly. What really won me over, however, was the fact that the pasty girl and the pastries turned out to be the heroines of the story. As a much younger woman, I spent a summer season turning our cream puffs and eclairs by the thousands in the basement kitchen of an elegant old hotel, and the flour on Agatha's made me feel right at home.

Before the screening started, chef Eichelberger told us she had done her best to find a local business to make the laborious cream puffs that play such an integral part in the story, before realizing they would be best done in-house using the recipe provided by the film company. The delectable cream puffs will be available to order during screenings of The Grand Budapest Hotel at Alamo Slaughter only through tomorrow, March 20. Share one with your sweetheart. Failing that, take the video tutorial and make them yourself. Making sure that each guest had champagne and a dainty Mendel's box of pastry at the end of the evening was an element of excellent service the legendary M. Gustave would certainly approve.