Pink Lady apples at the Bluebonnet Farmers' Market (Photo by Kate Thornberry)
There is a lot going on this weekend at the Farmers’ Markets, by which I mean, winter vegetables are still producing nicely, and the spring produce is finally arriving in earnest.

The above photo says it all: autumn apples (in this case Pink Ladies from the JBG stand) right next to spring beets, beet greens, and young cabbages, with a crate of sweet potatoes in the distance.

But what is the hottest news off the presses today? I can’t believe I am telling you this, because it means that I probably won’t get any: Farmer Willie McKemie from will be bringing the first young shoots of asparagus rom his farm near Dale to the Mueller Market this Sunday. Fresh, locally-grown asparagus is a completely different vegetable than the imported variety; it has a fresh, fiddlehead-fern-like flavor, and you really do wait for it all year. Farmer McKemie will also be bringing kale, bunching onions, and dried tomatoes. Tomatoes like these, only dried! (Photo by Kate Thornberry)
Engel Farms (Cedar Park and Downtown) will be bringing more strawberries and Brussels sprouts. Last Saturday, they brought so many strawberries that they actually still had some when I got there, around 10:30am.

Gary Rowland from Hairston Creek Farm will be bringing green garlic to both the Sunset Valley Farmers Market and the Cedar Park Market. Green garlic can be used the same ways as dried, it just has a milder flavor, and the greens can be used, as well.

Before I forget to mention it: Dewberry Hills Farm will not be attending any markets this weekend, having sold out of their fabulous chicken entirely. Perhaps next weekend. Dandelion greens- the cure for what ails ye! (Photo by Kate Thornberry)
Continuing the spring produce round-up: all JBG stands presently have fresh dandelion greens. Long a staple of American kitchens, dandelion greens are just now coming back into favor.

I don’t know how much longer this will be true, but as of last weekend JBG still had organic Rio Grande Valley grapefruit for sale. As far as I am concerned, grapefruit season is never long enough, and it is about to end, so get them while you can! Ruby Red Grapefruit at the Bluebonnet Market (Photo by Kate Thornberry)
Lone Star Nursery (Cedar Park, Mueller, and Barton Creek Markets) will be bringing starts to the markets this weekend, including Tropical Milkweed. This is important news, because the Monarch butterflies, who migrate through Texas every year on their way to Mexico, are facing extinction due to lack of habitat. Their primary food source and habitat is Tropical Milkweed. All across the state, concerned Texans are being encouraged to plant milkweed in gardens and yards to give the Monarchs a fighting chance. Lone Star Nursery will also have tomato, pepper, corn, squash, and cucumber starts.

New World Gelato (Cedar Park and Mueller) will be featuring limited quantities of a special St. Patrick’s Day flavor: Guinness Gelato. They will also have a dozen other flavors including Sea Salt Caramel Gelato and Blood Orange Sorbetto. Gorgeous Croissants from Laleigh's Patisserie (Photo by Kate Thornberry)
New Bakeries have been popping up at all of our area Farmers’ Markets, faster than I can write about them. Laleigh’s Patisserie is the newest baker at the Bluebonnet Farmers Market, making classic croissants, macarons, cinnamon buns, and cookies. Bluebonnet also has a new cupcake baker, Bodacious Cupcakes, and a new British baker, Let’s Get Pie. 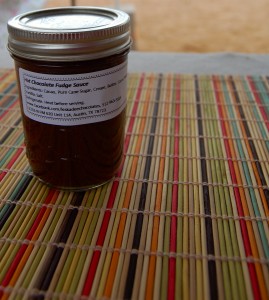 Hot Chocolate Fudge Sauce from Kiskadee (Photo by Kate Thornberry)
In the chocolate arena, one of my favorite chocolatiers, Kiskadee Chocolates, who sell at the Mueller Market, have introduced a marvelous new product: Hot Chocolate Fudge Sauce. I don’t usually name prices, because they are often subject to change, but I have to tell you that this amazingly rich hot fudge sauce is only $5 for 8 ounces, a steal for single-source cacao fudge sauce! Seriously.

Last week I went into some detail about the various pastured meat suppliers at the different markets, but neglected to mention the Cedar Park and Lone Star Farmers markets. I also forgot to mention a few folks, and I've discovered some new information, as well. Steaks from Wright Longhorn Beef (Photo by Kate Thornberry)
First: Peach Creek Farm is indeed back at the Downtown Market. I went last Saturday specifically to buy their excellent breakfast links; come to find out, they don’t have pork for sale yet, just beef. They will be restocking on the Berkshire Pork meats as they raise new hogs, but as of right now, they are an all pastured beef concern. The Lone Star Farmers Market in Bee Cave also boasts many of the vendors who sell in Austin on Saturdays. But if you live in Bee Cave or Lakeway, it is much more convenient to wait until Sunday! IO Ranch Lamb is an anchor of the Lone Star Market, selling lamb from the African Dorper Sheep; High Country Bison is also a Lone Star vendor, as is Richardson Farms, selling grassfed beef, pastured pork, pastured chicken, and eggs. Granny Smith apples surrounded by fresh cilantro (Photo by Kate Thornberry)
I also have an exciting event to tell you about and will go into more detail in the coming weeks as this important event approaches. A huge festival with a crucial mission will take place at Simmons Family Farm on April 6th. It is called Farmgrass Fest 14, and will have an all-star bluegrass line-up, including headliner MilkDrive, The Lost Pines, the Bottom Dollar String Band, and others.

The purpose of the festival is to raise money to set up an emergency medical fund for area farmers. One of the dirty little secrets about our American healthcare system is that small farmers and ranchers are pretty much on their own, especially as they get older. If they own their farm or ranch, they own too much property to qualify for Medicaid. However, ff they are a small operation, they don’t earn enough to buy individual health insurance. When medical emergencies arise, such as when Jane from Dewberry Hills broke her arm, or when the Ottmer’s son was in a car wreck, healthcare costs are devastating. (Just breaking a bone when you are in your Fifties will set you back about $10,000.)

The Grower’s Alliance of Central Texas (GrowACT) seeks to set up, at the very least, an emergency fund that local farmers can access. The Farmgrass Fest 14 will be the first step in that direction. I will fill you in on more details in the coming weeks, and you can bet I'll be haranguing you to attend! 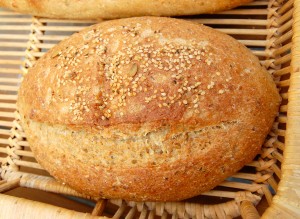 Flax Bread by New Bread Rising at the Bluebonnet Market (Photo by Kate Thornberry)
It’s that time again! What is Dai Due going to be making this weekend? OMG - Oyster Po'boys!

and Cafe a la Olla.