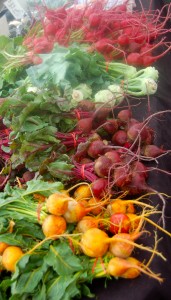 Glorious array of beets from Johnson's Backyard Garden (Photo by Kate Thornberry)
Golden beets, red beets, and Chioggia (striped) beets are in season in March, and the recent freezes have done little to hurt them, as they are quite tolerant of the cold.

Carrots as well have been relatively unaffected by the late freezes, as are radishes, parsnips, turnips, celery root, and everything else that grows underground.

Since winter has been hanging on so long this year, really making us wait for change to spring vegetables, I thought I would write about the great variety of pastured meats available to us at our local farmers’ markets. Texas is a ranching state, and we are blessed with numerous small, local ranching operations that have been quick to change to healthier, more humane, sustainable models. 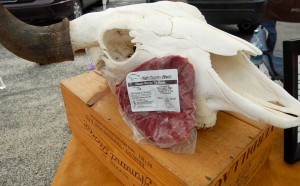 Pastured Bison from High Country Bison at the Barton Creek Market (Photo by Kate Thornberry)
Pastured meats come from animals raised out-of-doors, grazing on grass and able to walk about. Meat raised in this time-honored manner are higher in omega-three fatty acids and protein, and have a better flavor than factory-farmed meats. It is a more expensive method, but the costs can be lowered by buying directly from ranchers and farmers at the farmers’ markets.

Every farmers’ market in Austin features several vendors of pastured meat and eggs. We are truly blessed with many great options for healthy, sustainable meats. Probably the best idea is to go market by market: 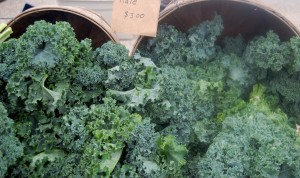 To break up all the pictures of raw meat, here is a photo of magnificent kale (Photo by Kate Thornberry)
The Barton Creek Farmers’ Market has Wright Longhorn Beef, which sells some of the most delicious beef you will ever taste. Longhorn beef is very low in fat, high in protein, and has immense beefy flavor due to the longhorn’s browsing habits. Because longhorns eat brush as well as grass, they are much gentler on the environment, as they tend not to overgraze.

Barton also hosts Full Quiver Farm, which sells a variety of its own pastured pork, beef, and chicken. Because Full Quiver Farm is a dairy operation, its pork is whey-fed, making it a truly superior product. Their beef is grass-fed, and the chicken and eggs are pastured. 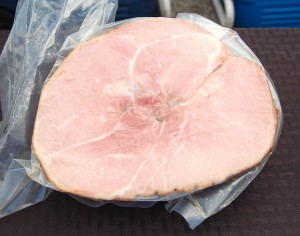 Ham made from pastured pork by Flying Pig Provision Company (Photo by Kate Thornberry)
Smith and Smith Farms sell pastured chicken and eggs. When chicken are pastured, they get a much more natural diet that contains larger amounts of protein than any all-grain diet can offer, and the improvement in flavor is quite noticeable.

Richardson Farms sells at Barton Creek, and like Full Quiver Farms, it sells grass-fed beef, pastured pork, and pastured chicken. Richardson Farms is one of the biggest pastured meat outfits around, and it provides meat to numerous Austin restaurants, as well as at several of the farmers’ markets: Barton Creek, Sunset Valley, Downtown, the Triangle Market, and the Lone Star Farmers’ Market.

Twin County Dorpers sells the high-protein and high Omega-3 lamb meat obtained from the Dorper variety of sheep, a non-wool-bearing African sheep that thrives in out hot, dry climate. 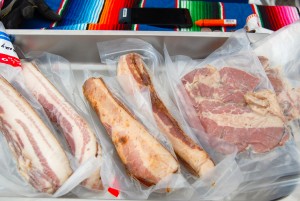 The Sunset Valley Farmers Market always has a table selling Richardson Farms grass-fed beef, pork, and chicken. About half the time there's also a table from Indian Hills Farm, which sells grass-fed beef and beef products, including amazing dry beef sausage cured in the German style. 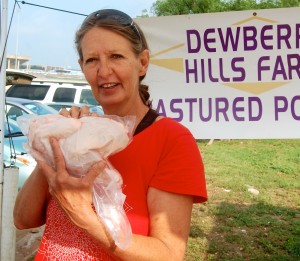 Jane holds up a fresh Dewberry Hills chicken at the Sunset Valley Market (Photo by Kate Thornberry)
Sunset Valley is also the market that you are most likely to find Dewberry Hills Farm Chicken. Dewberry Hills Farm’s motto is “Tastes Like Chicken,” and even though that is a humorous motto, behind it lies a stark truth: When Dewberry Hills started raising chickens on pasture, able to walk around and live a somewhat normal chicken life, Jane and Terry discovered that the resulting chicken meat actually tasted like the chicken they remembered from their childhoods. Dewberry Hills Farm chicken does taste like chicken, and it is the gold standard for Austin chefs.

The Downtown SFC Farmers Market has a Richardson Farms table; this market also occasionally has a Dewberry Hills Chicken table (when both Jane and Terry can get away from the farm) and an IO Ranch Lamb Table (when Jeff can get the help.) Indian Hills Farm can usually be counted on to be at the Downtown Market as well. 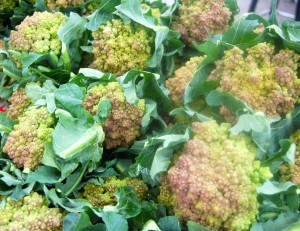 Romanesco Cauliflower (Photo by Kate Thornberry)
One of the most beloved vendors at the Downtown Market is Peach Creek Farm, which sells pastured Berkshire pork. Their pork is so popular that they literally cannot raise it fast enough; if they aren’t there, it means they've sold out.

When the weather is conducive to the laying of eggs (not a drought, and not molting season), the Downtown Market has Munkebo Farm’s eggs. Munkebo Farms sells a variety of pastured eggs, including duck eggs, goose eggs, quail eggs, and chicken eggs, and it wouldn’t be an exaggeration at all to say that they are all spectacular.

Southern Traditions Grass-fed Beef also sells at the Downtown Market, and they often have beef when Richardson’s is sold out. 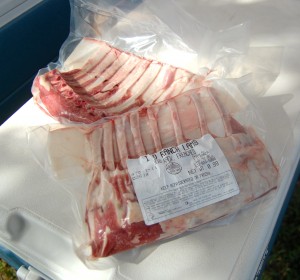 A rack of lab ribs from IO Ranch Lamb (Photo by Kate Thornberry)
Countryside Farms sells pastured chicken and pastured pork, both raw and made into delightful items such as charcuterie and rillettes. Countryside has also begun packaging its roasts into easy-to-eat portions suitable to lunch or dinner.

Dai Due Butcher Shop also sells at the Downtown Market and although they do not sell plain meats, they do sell processed meat products made from organic and pastured meats, such as sausages, roasts, rillettes, and pates. 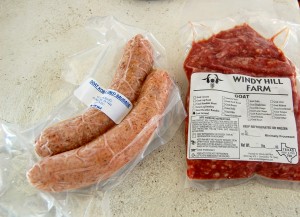 Southern Traditions Grass-fed Beef often sells at the HOPE market as well, and I have never been to a HOPE Sunday market without seeing Countryside Farm reliably there.

The Mueller Farmers’ Market usually has tables selling Smith and Smith Chicken and eggs, and the Dai Due Butcher Shop is often there selling its wares as well. 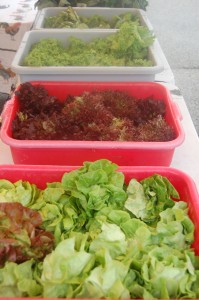 Lettuce is beautiful right now after the cold spell! This is lettuce from Caeda Farm (Photo by Kate Thornberry)
Winters Family Beef is one of the pastured meat mainstays of this market, and they specialize is grass-fed Angus and Wagyu beef. McGeary Ranch is another mainstay; they sell grass-fed lamb and pastured eggs.

I have run out of room, and I haven’t even gotten to the Cedar Park Farmers Market or the Lone Star Farmers’ Market! Also, without a doubt I have forgotten a vendor or two. I will have to continue this next week.

Moving on to non-meat news items: Now that Mardi Gras season is over, Curious Confections at the HOPE Market will be selling hot cross buns to replace its king cakes. Lightly spiced, and filled with raisins, currants, and sultanas, these are an Easter staple. Gemma will also be featuring Welsh cakes, tiffin, toffee (this time with pecans), strawberry pies, apple doughnuts, custard cream biscuits, and triple chocolate chip cookies. 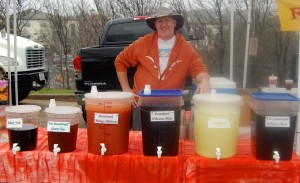 Nile Valley Hibiscus Tea is back at the Markets after a trip to the Nile Valley (Photo by Kate Thornberry)
The SFC Downtown Market has designated March as Picnic Month, and many Downtown Vendors are running specials on picnic items. Phoenix Farms will give you 25% off $10 or more of their new line of pickles; Cake and Spoon is featuring sausage rolls made from Peach Creek Farm lard and sausage; Oma and Opa’s Farm is selling sunflower shoots for $6 for two bags.