The second round of this year's Citywide 86'd competition took place at the Escoffier Academy of Culinary Arts on Sat., March 1. Before an audience of friends and co-workers, contestants from four local restaurant kitchens started the day with 25 minutes to prepare appetizers to present to the judges.

courtesy Cultivate PR
Although Carly Yansak covered the four-month-long competition for the Austin Chronicle daily online edition last spring and I attended the finale at the AT&T Executive Education & Conference Center (1900 University Blvd), this was my first experience with the early rounds of the contest. I was lucky enough to be invited to join the judging panel for the second round. My fellow judges were Swift's Attic pastry chef, Callie Speer; last year's winner, John Hajash of Congress Austin; and Agua Dulce Farm owner Jack Waite, who also provided some of the ingredients used in the three rounds of competition. 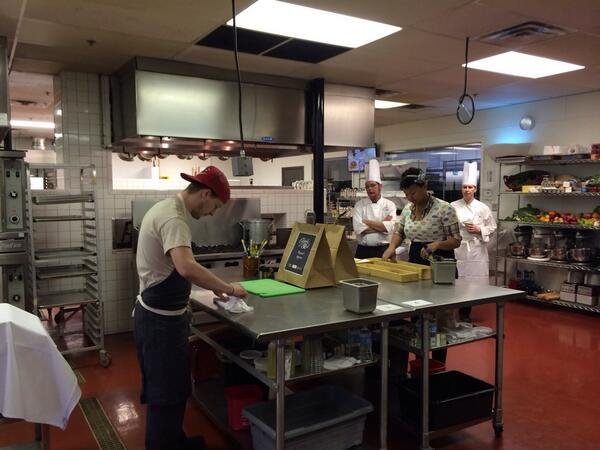 The city-wide competition grew out of a cook's challenge that started at Uchi a few years back. Once word got around to other restaurants about what was happening, other cooks wanted in. Last year's rounds were held in the open kitchen at Uchiko with no cooks from either Uchi or Uchiko entering because of the home-field advantage. Competing in the neutral kitchens at the Escoffier school makes it possible for all the interested restaurants to participate. In last month's first round, the cooks were Lauren Ortiz of Uchi, Jessica Rupert of Qui, Fernando Camacho of Parkside, and Michael Walston of Trace. Ortiz emerge the victor in the round and will compete in the finals in June. She was in the audience on Saturday, checking out her future competition.

In the appetizer round, cooks were given 25 minutes to create a dish using tiny live crappie (from Agua Dulce) and iced lemonade cookies along with greens and some lemon-lime soda. Watching them catch, kill, and filet the little fish was exciting for the audience. 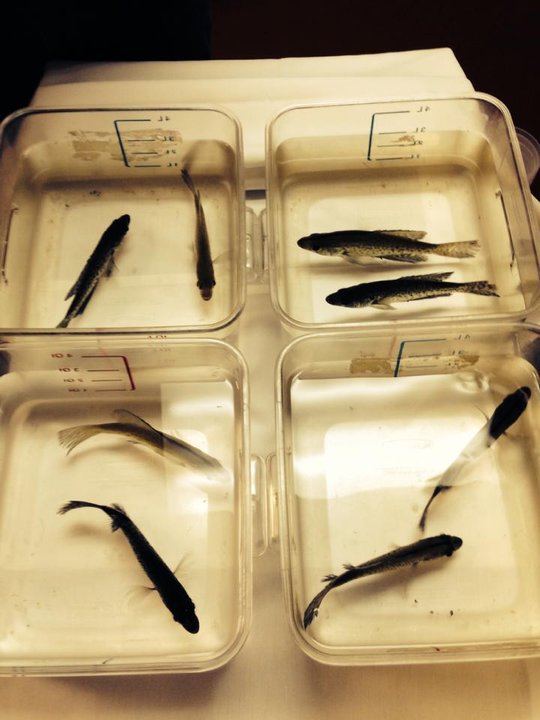 Zack Hanson was 86'd after the first round, so Oscar, Bradley, and Lauren moved on to entrees with local, grass-fed beef, several kinds of beets, and Mother's ribbon cookies. All three cooks had trouble delivering tender slices of beef, but the cookies were not as big a stumbling block as anticipated - Oscar turned them into breading for chicken-fried steak that was pretty tasty and earned a spot in the final, opposite Bradley. Amanda was 86'd after the entree round. 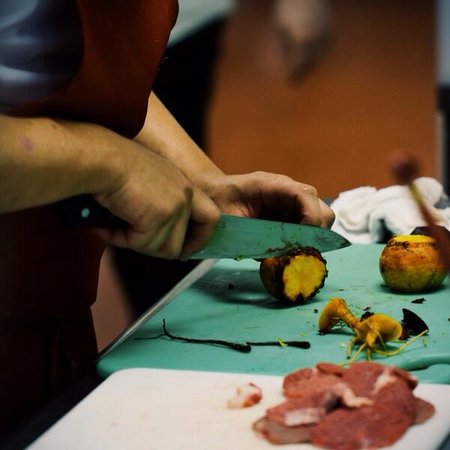 The dessert ingredients included more cookies - vanilla wafers this time, plus quince, balsamic vinegar, tart labneh cheese, and green chile-infused EVOO. Both cooks went straight for the liquid nitrogen to make a frozen component for their dessert offerings, but covering or incorporating the green chile flavor turned out to be the biggest challenge in the final round. 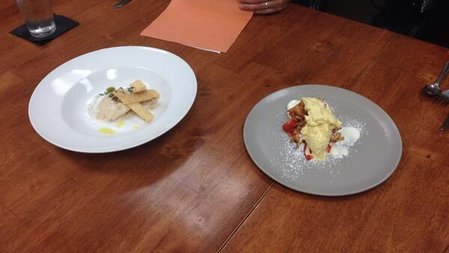 Dishes presented for the dessert round (Photo by Cultivate PR)
Oscar's quince sherbet (left, above) had an unfortunate grainy texture and an unpleasant chile aftertaste. Bradley used the EVOO as the fat ingredient in a funnel cake batter and did a better job of hiding the chile flavor, dusting the hot funnel cake (right, above) with powdered sugar and topping it with quince ice cream made from a creamy custard base. That dish won the day for Bradley Nicholson, and so he moves on to the finale in June. 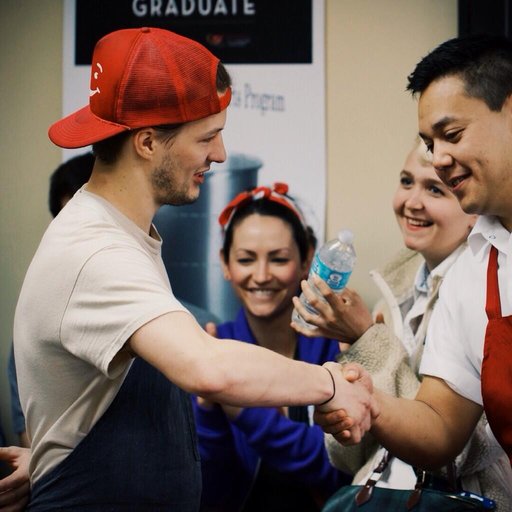 The next round of Citywide 86'd will take place on Saturday, April 5, at 10am. The preliminary rounds of the competition are by invitation only but it will be possible to buy tickets to the finals, which will be held in June at the AT&T Executive Education & Conference Center.