UPDATED: Though our list of vendors offering King Cakes is shorter this year, it’s still possible to order these delightful treats for enjoyment at home, the office, or carnival season celebrations between now and Mardi Gras on Tuesday, March 4.

In New Orleans, King Cakes are a regular feature of the carnival season, showing up for the Feast of the Epiphany (January 6th) and holding a place of honor at parties and celebrations through Mardi Gras, the Tuesday before Lent begins. The brightly decorated crowns of sweetened yeast dough or flaky puff pastry have a baby (representing the Christ child), a bean, or a coin baked into the dough and the person who finds the treasure in their slice is responsible for providing the King Cake at the next party. Though Austin doesn’t celebrate the entire carnival season as yet, King Cakes are growing in popularity and can be purchased at the following local businesses with 24 -48 hours notice.

Curious Confections (www.curiousconfections.com; 512/465-2879) Gemma and Michael Maherne are cottage bakers who maintain a busy stall at the HOPE Farmers’ Market every Sunday. Give them at least 24 hours notice on orders and they’ll whip up traditional, cinnamon-sugar filled New Orleans-style King Cakes ($10 small, $20 large) or more exotic fillings such as lemon curd, Voodoo chocolate, or chocolate hazelnut ($12 small, $24 large); pick up or delivery, by arrangement. 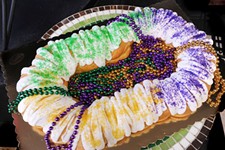