Can there ever be such a thing as too much bacon? 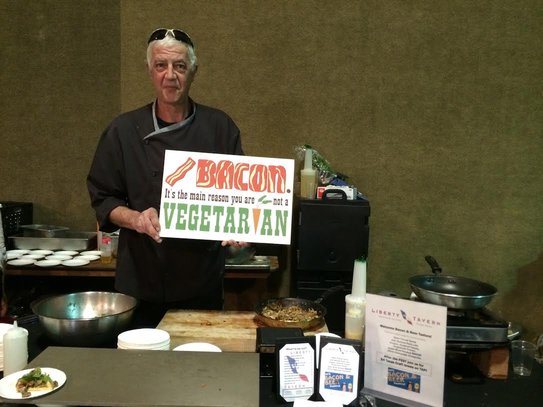 This sign from the Liberty Tavern table says it all (Photo by Marie Franki Hanan)
The inaugural Austin Bacon & Beer Festival last weekend looked like a rousing success. Marla Camp and the award-winning Edible Austin magazine teamed up with Massachusetts event company Eat Boston to produce the first Austin version of an event the company has held in a few cities across the country. 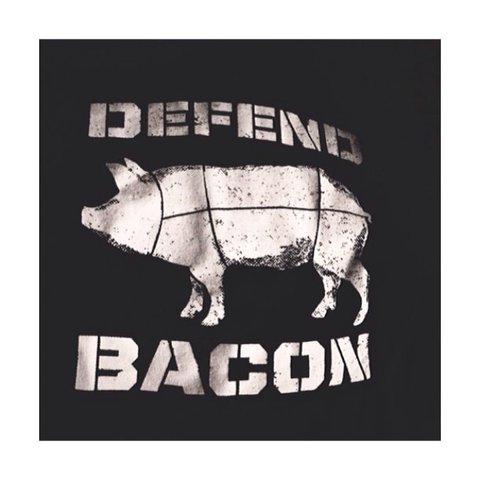 Festival t-shirt for sale (Art by Josh Lafayette)
More than 700 people showed up to consume pork-centric dishes created by some of Austin’s most creative chefs paired with craft beers at Marchesa Hall last Saturday afternoon. There was pork-centric merchandise available in the lobby and even pork-themed entertainment presented by Salt & Time butcher Bryan Butler, who broke down half a hog to on-lookers’ amazement, 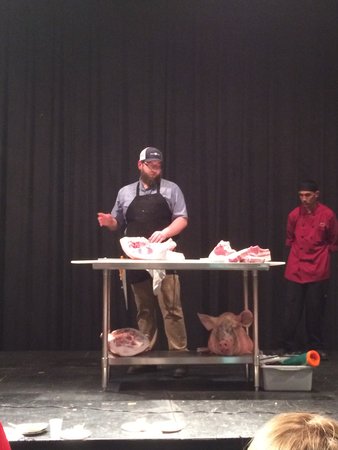 The line snaked around Lincoln Village as guests entered to lobby to check in for drink tickets and strolled through two halls of tables loaded with porky delights. Tasting that many pork dishes in one afternoon definitely made for a marathon rather than a sprint, and we did hit the wall before making it to every table. I took designated beer drinkers and, while they were both happy for the opportunity to drink craft beer, neither of them made discoveries at this particular party they considered noteworthy.

I tasted everything from truly innovative bites to soul-satisfying, ethnic comfort food dishes, right on to some failed ideas where some of the ingredients should not have been prepared with bacon in the first place. (Example: cooking nuts in bacon fat turns them into unappetizing little grease bombs at room temperature – now we know.) There were plenty of examples of pork belly (when will it ever stop?) plus everything from the Turtle restaurant's ultra rich bacon bisque to three kinds of ice cream; one with bacon and one with beer, Amy's flavors which were both good, and the other with smoked chocolate in a dark beer float from the upcoming St. Philip that unfortunately didn't appeal to me.

The two most impressive dishes I came across were in the north hall and both involved bacon and fruit. Chef Russell Dougherty from the newly-opened Little Barrel and the Brown had poached apple slices and prunes in a mixture of Earl Grey tea and cognac and then wrapped them in bacon. Once the little bites had been grilled to crisp the bacon, he served them with a dab of grainy mustard and a little bleu cheese for a dynamite combo. Just down the row, Snack Bar culinary director Tommy January had wrapped dried apricot halves and a sliver of jalapeno pepper in house-cured Szechuan bacon, crisped it up, and doused it with a White Owl pale ale gastrique. They were both excellent offerings for this kind of party because they made me want to try each of the restaurants.

In that same room, one of the stations offered squares of crispy bacon on tiny clothespins and served plates with ethereal little pancakes topped with bacon and syrup – it was clever and delicious, but due to bacon overload, I cannot remember who made it. Turns out, there is such a thing as too much bacon.