All six of the Saint Arnold Bishop’s Barrel series of beers (each a single release) will be sampled in 4 oz pours and paired with a corresponding chocolate dessert at Banger’s on Wednesday night. As each beer in this series is a single release, the majority of the beers served will no longer be available to the general public. A sample pairing includes a Bourbon Barrel Wee Heavy Scotch Ale with a Spicy Toffee Pudding. Both Wagner and Prater will be available to discuss the curated beer and chocolate pairings. 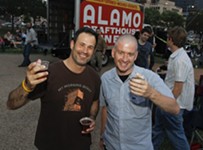