On being a terrible waiter

An onion volcano, but not the steakhouse in question... (by Creative Commons)

My post-college, pre-graduate school malaise was mitigated by the immediate need to fund a meager existence outside of my parents’ home. Dutifully, I printed out dozens of copies of my resume and went a’ huntin’.

I was convinced that I needed to be a waiter – something about the romance of the prospect of being a graduate student/waiter was intriguing. I was no stranger to food service; at the schmancy liberal arts college I attended in Ohio, I worked full-time, all four years, at the town Subway, artfully making sandwiches with local high school kids and a dynasty of majestic (no sarcasm here, really) Ohio women. My peers would never even deign! But I got free sandwiches along with a paycheck, killing two birds with one glutinous stone.

Perhaps most were unimpressed with my Subway cred on my resume, because the only place in Austin that called back was a Japanese Steakhouse in North Austin. It was far North, but I couldn’t be picky, I needed the money. Here’s how the job interview went:

Manager: Would you be able to start tomorrow?
Me: Yes.
Manager: Do you own a black shirt, pair of black slacks and black shoes?
Me: I think so, if not, I can get them.
Manager: Will you get your hair cut?
Me: … yes…?

That’s it. Hired. I was grateful – even excited about my first waiting gig. And at a teppanyaki place, no less, where I thought customers were more likely to be happy due to the fancy knife-work showmanship of their chefs. Cute tricks with pieces of shrimp! Death-defying egg cracking! Onion volcanoes!

My enthusiasm waned quickly once I encountered two interrelated hard truths: I was a terrible waiter working for a terrible place.

Before the bad-mouthing begins, I fully own my ineptitude as a waiter. I was everything a waiter was not supposed to be. Clumsy: I constantly would trip over the shallow stairs leading from the kitchen and prep area out to the dining room, spilling so many soups that eventually I lost track. Forgetful: Not only would I forget people’s orders and the daily specials, but I would forget to turn the burners of the Teppan grills on, forcing the poor chef assigned to my tables to wait while his cooking surface warmed up. (An aside: it’s physically impossible that I was the waiter Wes Marshall mentions in this review for The Austin Chronicle in 2004, but for all intents and purposes, I was that waiter). Sweaty: Clothing myself in non-breathable polyblend black fabric was not only a crime against fashion, but also a crime against my Ashkenazic ethnicity. I’ve never lost so much water in my life. I would barely start my shift before I was “in the weeds.” Although I was slowly improving, my progress was painfully slow. I must have appeared developmentally disabled when considered by my fellow waiters who all had the panache and biting sarcasm that I found so attractive in waiters. I wanted panache and sarcasm, but I was too busy thinking, “Right foot, left foot, right foot, left foot…”

When I left, it was not because I was fired for my many crimes against the fine art of waiting; it was because of boss issues. The restaurant was run by a trio of siblings. One owned the joint, one was the manager, and one was the sushi chef. I only “got on” with the sushi chef, who would, on bad days, sneak me pieces of sushi and tell me that the night would get better. I think in telling me this she was also telling herself the same thing. It was all-too-clear she was on the bottom of the totem pole. The manager’s management style was borderline asshole-ish (which is fine if you're running a tight ship, by the way), and the owner seemed like an owner, a numbers person. Alone, each of the siblings were fine, and I had good interactions with each.

Together, they were a nightmare.

An anecdotal example: Once, while I was running lunch shift by myself (they consistently only put one waiter on lunch shift), loud screams came from the back of the house. The pitch of the three-sibling argument was heated, with some choice uses of that particular word which rhymes with “punt.” During the row, customers were rightly alarmed, concerned and annoyed. I comp’ed the meals of the customers closest to the argument – thinking that no one should have to live through a family fight during their lunch hour while staring at cut-up pieces of chicken teriyaki. No one. That’s my line in the sand. One of the siblings stomped out of the restaurant, and things immediately cooled. Later, when going over the lunch checks with the manager, I told him I had comp’ed a few meals because their argument bled significantly into the dining room. Here’s how that conversation went down:

Manager: We never comp meals. These meals are coming out of your paycheck, and your tips.
Me: … … …

Oh, and about tips: I was limited to a $40 maximum in tips for lunch shifts, and had a mandatory 50% tip pay-out for dinner shifts. So… that seemed illegal, but I never hired a lawyer to check.

On paychecks: After the first two weeks of working, I received my first paycheck. Sitting in my car in the parking lot I opened up the envelope, wondering what my meager salary would total. -$2.95. I cried for 10 minutes in my car, not knowing how this was even possible.

After that cathartic cry I lasted about a month. I finally walked off the job because the manager wanted to take another "mistake" out of my paycheck. This prompted me to leave him, as I have never done before nor since, in an immediate lurch.

I never said I was a good waiter. 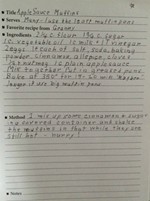 Food Issue Extra Helpings: Reading Between the Lines
The weight of a family cookbook