Cipollina Bistro (Photo by John Anderson)
Many people who have visited the Clarksville bistro Cipollina may have considered it Italian all along, but sprinkled among the wood-fired pizzas and extensive wine list were Mediterranean and French-influenced dishes that seemed to have the menu focus all over the map. 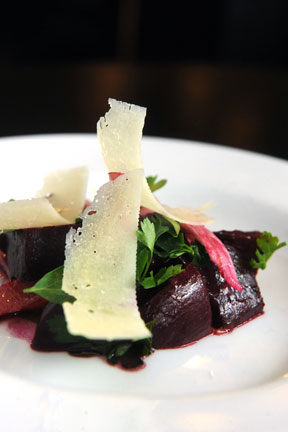 Cipollina’s identity crisis was brought up over lunch with owners Ron Weiss and Jeffrey Weinberger last year when then-new executive chef Matthew Grimes suggested a revamp of the menu. Though they thought the chef was joking, Grimes immediately got down to business, bringing Cipollina into its next vita as a truly Italian restaurant. The chef relied on regulars to give their blunt opinion on dish contenders, from ingredient choices to saucy details. After months of running specials and seeking feedback from guests, Grimes has now created a customer-driven menu that gives Cipollina a truly Italian heart and soul. 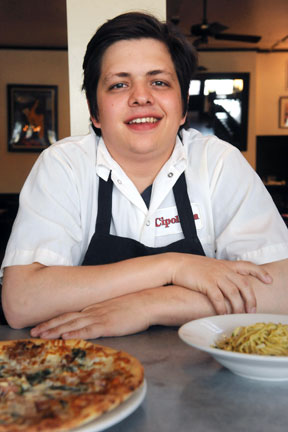 Grimes grew up around the world with his family, and their time in Spain lent to culinary explorations in France and Italy. He got his Austin start at the Driskill Grill before moving to Enoteca Vespaio, where he learned the arts of pizza rolling and pasta preparation. In 2011, he joined the Weiss-owned restaurant family, cooking at the now-closed Shoreline Grill and then at their fine dining restaurant, Jeffrey’s. When Jeffrey's closed for refurbishment and re-branding in April 2012, Grimes walked across the street to begin his tenure at Cipollina, and was named chef last February. He and sous-chef Thomas Riland decided together to go full Italian and bring the neighborhood aspect in to their full advantage. As he points out, Cipollina is within “walking distance for a lot of people who come in, and the neighborhood has come to know what they can expect from us,” Grimes said. “We got great feedback and that helped us design the menu that we sell.” The new menu boasts of robust Italian flavors with a local spin. Serving only one dried pasta dish before, Grimes converted a fryer into a dedicated pasta cooker and welcomed a chitarra to the family of imported Italian kitchen equipment to crank out handmade pasta daily for seven new dishes. A main focus for Grimes was to get back to basics and simple, fresh ingredients. For dishes like tagliatelle con funghi, the cream is steeped with mushroom stems to elevate its flavor. The kitchen phased out dishes that used dry products and other ingredients they no longer wanted, including “flavor crutches” like truffle oil, according to Grimes. 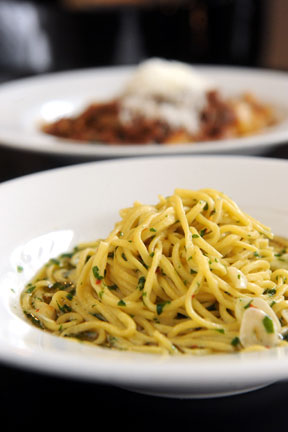 Menu items were slowly replaced with new ones that highlight the quality of fresh meats and produce, including local finds from John Lash’s Farm to Table and organic produce from Johnson’s Backyard Garden. Research in the kitchen has not only introduced nearly 20 new entrees to the menu, but has also led to improvements on existing Cipollina favorites. To bring some chew to a crackery pizza crust, Grimes now proofs the dough overnight, allowing it to rise on top of their stone oven that was imported from Modena and lovingly named Nadine. “The pizzas were probably the most challenging because we have five pork pizzas and three vegetarian ones, “Grimes said. “How much is too much pork for cooks who love eating pig?”

That’s a legitimate question for a kitchen where two sides of a Countryside Farm hog are broken down every two weeks, with all 200 pounds put to use throughout the dinner and brunch menus. The loin stars in the pork saltimbocca and the legs are ground for a hearty Bolognese. Pork belly is brined, braised, smoked, and fried to order in a variety of dishes such as the Pork Belly Benedict, where it stars on top of homemade biscuits and caramelized onions with poached Vital Farms eggs and a spicy whole grain mustard hollandaise. The Benedict was added to the recently uplifted brunch menu when a porchetta roast didn’t appeal to the masses – the same reason why the charcuterie plate was pulled to make room for more familiar dishes.

“There’s always that line that you have to flirt with, having a consistent, friendly menu and then also trying to bring people in,” Grimes said. “There is pressure to constantly adjust yourself with trends.”

After a six-month search for the best, Cipollina will soon offer gluten-free pasta using local Smart Flour Food’s blend of ancient grains. Grimes has also taken cues from neighboring restaurants and begun offering prix fixe specials ranging from $24 to $28 that focus on a different Italian region each Sunday through Wednesday. Starting in March, Cipollina will host a monthly feast to bring people and regional flavors together at one table. Now that sounds like an Italian tradition well worth embracing.