The trenches of the service industry are full of lessons 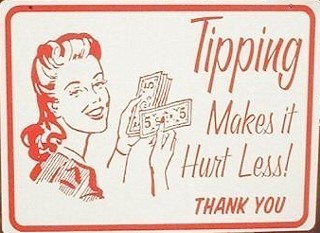 Like so many of us, I have had to work service industry jobs to pay the bills. What began as a simple way to have cash in my pocket turned into a 10-year odyssey through every position in a restaurant.

Sure, I have horror stories from my time in the trenches: As a server, I was handed a dirty diaper by a woman at a table I was serving. As a cook, I unintentionally made a server cry as I explained the difference between medium-rare and well done. As a bartender, I once spilled an entire Mexican martini, shaker and all, on a baby.

More interesting to me, however, are the unexpected skills that I acquired.

My social anxiety could have gotten the worst of me. I remember being terrified of the first table I ever waited on, two businessmen out for lunch. For some reason, I believed that going up to them and taking their order (which they, quite reasonably, expected me to do) would interrupt their conversation and annoy them. I was terrified! I couldn’t imagine walking up to two strangers and talking with them, even if it was - quite literally - my job.

Worse still was waiting on tables of people my own age. I would get especially flustered if I thought any of the customers were cute. I must have dropped drinks on almost every cute guy at my first serving gig.

Within a few months, I noticed a change in myself. A new confidence when it came to interactions with people. Having been forced, day after day, to go up to strangers, I was learning some killer social skills.

Even better, I was learning how to read people. Some folks just want to go out for a meal and receive prompt, discreet service. Others want to interact with their server, joke around and have a bit of fun. Maybe some would be having a bad day (or date) and needed someone to take just a moment to do something nice for them.

The trial-by-fire approach to learning how to talk to people might not work for everyone, but I am amazed at the amount of servers I know who defeated their social anxiety this way. As a journalist, interviewing strangers is a key part of the job, one that I don’t know that I would be good at had I not worked as a server for so long.

Another unexpected upside to service industry jobs, especially in cities like Austin, is the coworkers. It’s tough to be in a new city with few friends. Getting a job at a restaurant basically sets you up with a built-in social circle. Even better, almost everyone is a server-slash-something. They’re artists, musicians, producers, filmmakers, and just about every creative pursuit imaginable.

I’ve had so much fun collaborating with, getting inspired by, or just supporting my creative buddies, especially when I had just moved here myself and was overwhelmed by the sheer number of events each week. They were my artistic Sherpas, showing which paths were the best. Even now, without my extensive crew of ex-coworkers, I wouldn’t be able to keep up with what’s new and exciting.

A lot of people who have never worked service industry jobs might think that restaurant workers are a crude bunch, and they wouldn’t be totally wrong. In the high-stress environment of the dinner rush, people need a way to blow off that steam. A lot of innocent (and not-so-innocent) flirting, trips to the bar cooler to chug beer, or strategic retreats to the bathroom for a quick pick-me-up are common. Some servers carry flasks, or have deals with the bartender that involve drinks made in error.

In my experience, I've come to know this: Severs really do care about the people they’re waiting on. When I was working at a restaurant in the warehouse district a few years ago, a couple came in, and another server took their order, drinks and an order of queso. My colleague went back to the table to find the woman in tears. The guy had very unexpectedly dumped her and left, without so much as leaving money for the beer and appetizer he ordered.

Without a second thought, the server went to the manager and had everything on the bill comped. Hearing what had happened, the chef whipped up a special dessert for the woman. A few other servers and I sat with her for a while, condemning the guy’s rude behavior as we tried our best to cheer her up.

When she left, she was still upset, but she took the time to thank us each individually. She said that what had happened would have been much worse if it hadn’t been for the pack of strangers working at this restaurant who tried their hardest to make a bad situation better.

Working at a restaurant might not be the most important of jobs. What happens there probably won’t change the world, but there are few jobs in the world that give a person so many opportunities to improve someone’s day. Being able to see, up close, how small acts of kindness can make a big impact on someone is an enlightening experience.

Many times, when dealing with particularly demanding or rude customers, I would fall back on a strategy of being ‘aggressively nice.’ I figured that I had no idea what this person was going through, they might be having the worst day of their life. I would assume that they didn’t mean to take their frustrations out on their server, and work harder to do that small act of kindness. Nine times out of 10, that small effort changed their demeanor entirely.

As a server, you see the entire scope of human nature. In a way, you’re an amateur anthropologist, watching from the sidelines, not getting too involved, studying and learning how people interact. If you pay attention, you can use what you learn to become a better person yourself.

Now, as I’m working towards having a job that requires a degree rather than the ability to carry a tray full of martini glasses without dropping them (which is not an easy feat), I sometimes miss the frenetic energy of restaurant work. There’s an odd beauty to everyone working in concert to provide deliciousness and a good time to a room full of people. Still, I carry with me the lessons learned and know that, if all else fails, I can make a damn good Bloody Mary.