Official Drink of Austin Competition is Back The Austin Food and Wine Alliance and David Alan, aka the Tipsy Texan, are bringing back the Official Drink of Austin competition in style.

The event began over a decade ago, took a brief hiatus, and is back this year to celebrate Austin’s vibrant bar and craft cocktail scene. It will be held at the AT&T Executive Education and Conference Center on February 20th from 7 - 10 pm. If you are into food and drink at all, this is the night for you.

In years past, individual bartenders competed, but this year teams of bartenders from local watering holes submitted drink recipes based on locally-made spirits: a long drink, an up drink, and a shot. In the end, six teams were selected to shake their stuff in hopes of being voted the Official Drink of Austin. Competitors will include teams from qui, WeatherUp, drink.well., Four Seasons Hotel, Midnight Cowboy, and Whisler’s.

Tickets get you the chance to sample cocktails featuring Texas spirits, nosh on appetizers, and also taste the Official Drink of Austin contest entries while enjoying tunes by popular Austin DJ ulovei. No serious cocktail aficionado will want to miss this soiree.

Through this weekend, Austin Food and Wine Alliance is offering discounted tickets: two tickets for $90, or one for $45. Monday the price will return to $65 a piece. Tickets can be purchased here. 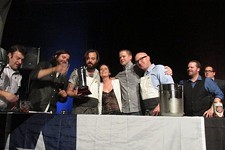