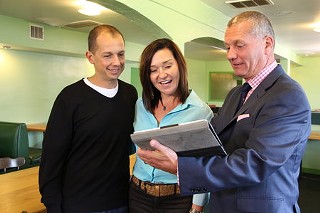 In each episode of the new series, Simpson helps hopeful restaurateurs find ideal locations for their young businesses. Simpson shows the participants three different locations and offers his vision for how the restaurant could look in each particular spot.

Austin husband and wife team Joanie and Cary Friedan star in the season premiere, looking for a permanent home for their Skinny Limits juicing company that currently operates out of a food truck and a couple of small retail counters. After hearing about the show through the local mobile food community, the Friedans reached out to the production company, and, after “a long process” of interviews and negotiations, they were selected for the show. Filming turned out to be fun for the Friedans, and Cary reports, “It was great [working with Keith Simpson]. He knew a lot of things that we didn’t and had a lot of great suggestions, a lot of great ideas.”

Cary and Joanie Friedan, both native Texans, met in Austin and dated for about two years before marrying in May 2004. They never expected to start a food company. “We had no restaurant experience whatsoever,” Cary said. “Before we opened the trailer, we were both involved in various areas of property management.”

Joanie Friedan has always been into healthy eating and exercise. A few years ago, she began juicing, preparing juice cleanses for herself, her husband, and their kids. While Cary enthusiastically recognized that he did feel better from his wife’s juicing regimen, he joked, “We were kind of waiting for her to finish with this phase of our lives so we could go back to eating regular food again. But we never hit it.”

Cary explained that Skinny Limits was really an “accidental business.” Originally, it was just Joanie and her family drinking the homemade juices in mason jars. But then one of Joanie’s friends asked if she would make juice for her. Then that friend asked if the Friedans would make juice for another of her friends, and a business soon began to emerge. “Living in a town like Austin, it’s almost impossible to not catch the fever of fitness and health,” Cary explained.

By June of 2012, they were selling their product online. Last fall, they purchased a trailer and began working out of that. More recently, they’ve rented retail counter space where customers can come and pick up their juice products. What they really needed was a facility with space for a commercial commissary kitchen, offices, and retail counters. That’s where Buy This Restaurant comes in.

The Friedans were very nervous about the entire process of starting a food company, especially having to invest such a significant amount of money in their business. But they’re optimistic about the future of the enterprise, especially after the opportunity for an hour of television exposure. They’re even having a big watch party with friends and customers to celebrate their Food Network appearance. “Being a local Austin company and getting to be on a national television show is not something we get to do every day,” Cary said.

Regarding the future, Cary said, “We have in our plans opening more stores. Keith helped us with one, then we have a couple more that we’re working on now, kind of taking the ball and running with it.” Cary is confident that the episode will help them expand: “We’re hoping to have Skinny Limits all over Austin here pretty soon.”

In the meantime, check out Skinny Limits at these locations.

Buy This Restaurant airs tonight (2/5), 8pm, on the Food Network. 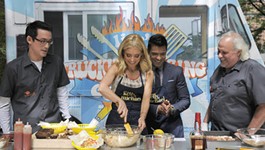