The crowd was mostly adults in their 30s and 40s and their kids. Attire ranged from a kangaroo costume, to Australia jerseys to "I heart Sydney, Australia" shirts to a SpongeBob costume and a wide variety of Australian flag face paint. The event, which began around noon and lasted all day, helped benefit Meals on Wheels & More with proceeds from the silent auction and a portion of the frozen pie sales.

At around 5pm, organizers held two pie eating contests, one for kids and one for adults. A variety of girls and boys participated in the kids’ mini pie eating contest. While, for the most part, the kids competition was just for fun, one of the younger boys did burst into tears after tasting defeat in the contest. 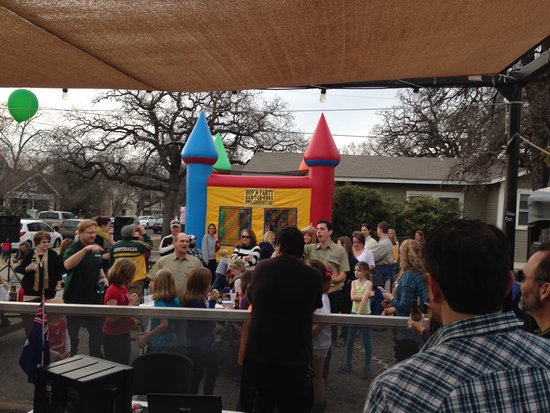 Kids and adults enjoying the party (Photo by Mac McCann)

Luckily, there were no tears during the adult contest, which consisted of all males, mostly in their 20s and 30s. While the previous record of 16.8 seconds wasn’t broken, Mitch Hart, a 20-something native of Brisbane, Australia, came out on top by completing his pie and shouting “Aussie, Aussie, Aussie, Oi, Oi, Oi” in 21 seconds. Hart, in his thick Australian accent, told me after his victory that he’s just visiting Austin for vacation for a few days. As an Australian, he said he was looking for somewhere to celebrate Australia Day in Austin, and Boomerang’s was one of a few such places. No tears among these manly pie eaters (Photo by Mac McCann)

How did he win? “Living in Australia, I’ve eaten enough pies to know how to eat them fast,” he said. His victory earned him a free Boomerang’s pie a week for a year. Unfortunately, Hart won’t be in Austin for much longer, but he said he and his friends will likely make a few more visits to Boomerang’s before he heads back Down Under.

Founder and owner Jack Fennell explained me to that, “Pie in Australia is a like a burger in the United States. It’s the iconic meal.” The idea came to Fennell while he was living in Australia between 2001 and 2004. He had his first Aussie meat pie in 2001 and immediately fell in love with it. Upon returning home, Fennell opened Boomerang’s in 2006 on Australia Day. Fennell emphasized the company’s slogan “Australian Inspired. Austin Made.”

Fennell’s business partner, Lance McInnes, is married to an Australian, and was actually visiting his in-laws in Australia around the same time that Fennell was there. While at a party in 2006, McInnes, a veteran of the food industry, heard about a new Aussie pie store in Austin. He stopped by Boomerang’s soon after and joined Fennell in business. Both grew up in Texas, both graduated from the University of Texas at Austin, and both are undoubtedly passionate about pies.

While they only currently have one physical location, they are hoping to expand eventually, and they’re especially looking into a possible Downtown location. But outside of their stores, they’ve also found success in retail with their frozen pies. They’ve gone coast to coast, with their products being offered in Whole Foods Markets and H-E-B.