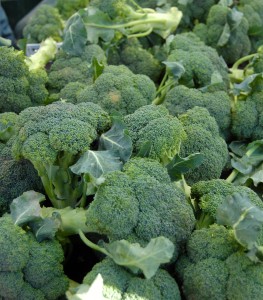 The peak of broccoli season (Photo by Kate Thornberry)
The weather is going to be astoundingly gorgeous this weekend, sunny and 70 degrees. The recent cold snap killed all the pests, so the vegetables are at their finest. All of the greens are firm and crisp, and the heads of broccoli are simply enormous. 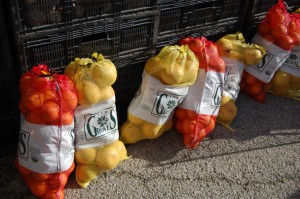 It is also citrus season. All area markets have organic oranges and ruby red grapefruits from the Rio Grande Valley, available at the Johnson’s Backyard Garden tables. Caeda Farms at the Barton Creek Farmers Market has Meyer lemons. Indian Hills Farm, which sells at both the Downtown Farmers Market and the Sunset Valley Farmers’ Market, has Meyer lemons, as well. 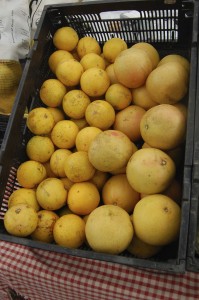 The Mueller Farmers Market will have a rare type of lemon this weekend, the Ponderosa lemon, which a local horticulturalist has persuaded to grow right here in Austin. Ponderosa lemons have a thick, bumpy rind, and are thought to be a cross between a lemon and a citron. They look more like citrons, but taste more like lemons. 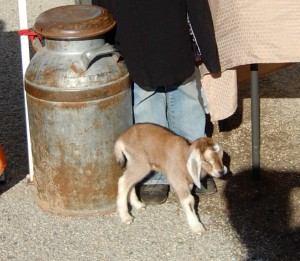 Only one day old! (Photo by Kate Thornberry) 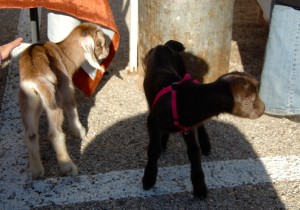 If you look carefully, you can see there are two of them (Photo by Kate Thornberry)

Although the Markley Family Farm strawberry crop has been delayed, I hear that Engel Farms is planning to bring some strawberries to the Mueller Market this Sunday. They have been selling some really beautiful heirloom tomatoes in recent weeks, too. Sometimes you can find Engel Farms selling at the Downtown Market on Saturday mornings, as well.

Mueller will be welcoming Prickly Pair Flowers back this Sunday. Although it is awfully early in the year for fresh cut flowers, Prickly Pair has been experimenting with covered growing tunnels, and apparently has been doing so well with that approach that they will have entire bouquets for sale. 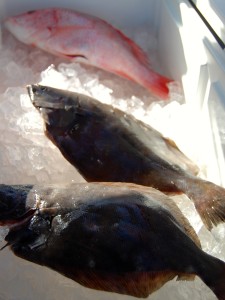 In case I haven’t mentioned it lately, you can get whole fish from K & S Seafood. Pictured here, a whole Red Snapper and two whole Flounders. K & S sells at Barton Creek on Saturdays and Mueller on Sundays (the selection is better on Saturday, though). 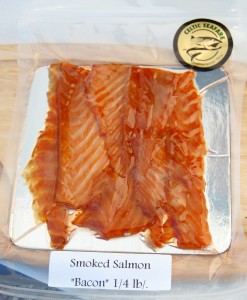 The 2014 Beer and Bacon Festival is coming. Flying Pig Provision Company will be in attendance, and will be taking their Bacon Nuts, which were specially formulated for the Festival. Celtic Seafare, not to be outdone, has been developing a special salmon bacon. I got a sample of it last Saturday, and I must say, salmon makes a very satisfying bacon that pairs beautifully with scrambled eggs.

Oh Kimchi, who got their start at the Barton Creek and Bluebonnet Markets, was the subject of a wonderful big article by Addie Broyles in the Austin American-Statesman last week, and now they are expanding into both the Downtown SFC Market and the Sunset Valley SFC Market. Their many varieties of fresh kimchi are delightful; it is great to see them succeed. Perhaps there is a Good Food Award in their future?

Oh and speaking of the Good Food Awards, two Austin area Farmers’ Market vendors won in the “Pickles” category in San Francisco this week: Pogue Mahone took a prize for their Dill and Garlic Pickles, and Confituras’ Pickled Blueberries won, as well. Other local winners are Independence Brewing Company, Jester King Brewery, and The Jelly Queens. Congratulations to them all! 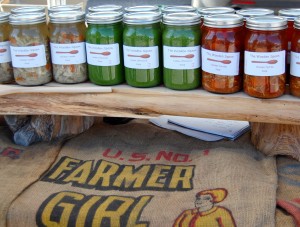 Soup by The Wooden Spoon (Photo by Kate Thornberry)

The HOPE Farmers Market will have a knife sharpening table this Sunday, where Devon Fry will be happy to sharpen any kind of blade for you. In other HOPE news, Windy Hill Farm will be bringing goat meat, lamb, beef, lots of eggs, and their popular “Golden Fire” Habañero hot sauce. Wild River Farms, another HOPE Market mainstay, are adding Micro Kale to their line up of hydroponic greens starting this Sunday. 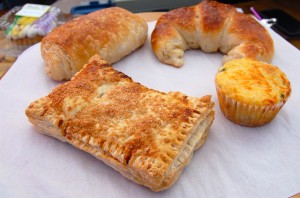 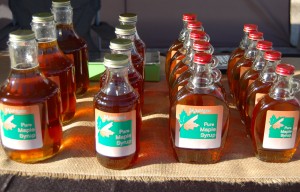 Violet May Gardens, who sells maple syrup at the Barton Creek and Bluebonnet Farmers Markets, has these pretty new labels. Her syrup is bottled on her family’s farm in Michigan. The Barton Creek Market now has not one, but two maple syrup vendors, the other being Aldridge Urban Farm, whose syrup comes from a family farm in Ohio.

It looks like Jesse Griffiths and the Dai Due crew will only be cooking at the Downtown Market for the foreseeable future. They are keeping it simple again this week, with the following menu:

Griddled Boudin with a fried egg, kale, and herb crackers;

Pon Haus with jujube syrup and a fried egg;

Among their uncooked wares, Dai Due will be featuring a variety of sausages, including Liverwurst, Hot Boudin, Rose Veal Bockwurst and Rose Veal Keilbasa. They will also have their inimitable and very popular Pon Haus, which is a shredded pork and cornmeal loaf sausage. 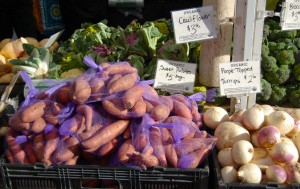 If you are lucky: lemons, strawberries, hothouse cucumbers.