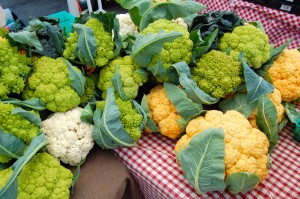 Cauliflowers (Photo by Kate Thornberry)
Last week’s Arctic blast will have sweetened up all the root vegetables: Beets, carrots, and parsnips will all be at their best. Brussels sprouts, cabbages, cauliflower, and broccoli will all be more delicious too, as long as they were covered and didn’t actually freeze. 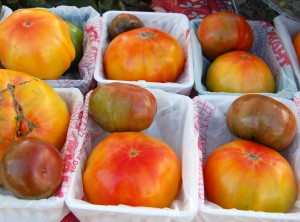 Heirloom tomatoes at the Downtown Market (Photo by Kate Thornberry)
Even the greenhouse tomatoes will have an improved flavor, because chilly overnight temperatures turn vegetable starches into sugars. 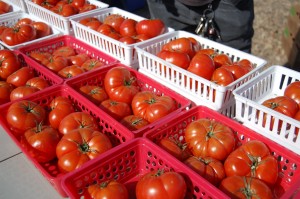 Red Heirlooms at the Bluebonnet Market (Photo by Kate Thornberry)
Speaking of greenhouse tomatoes, for the last few weeks there have been gorgeous heirloom tomatoes for sale at the Downtown SFC Market: Cherokees Purples, Green Zebras, and several other varieties, including a very large yellow and red variety that has become my favorite. Now, there is another grower with large red heirloom tomatoes selling at the Bluebonnet Farmers’ Market on Sundays. In all my years of shopping at the Farmers’ Markets, this is the first time that there has been such a consistent overlap of the lettuce season with really flavorful winter tomatoes. 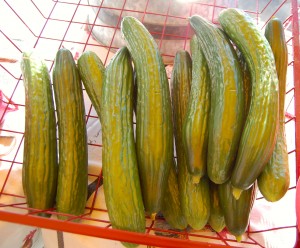 Greenhouse Cucumbers by Caeda Farm (Barton Creek) (Photo by Kate Thornberry)
As if a lettuce and tomato salad in midwinter alone weren’t enough, Caeda Farms (Barton Creek) has hothouse English cucumbers. English cucumbers have a very mild flavor and last an unusually long time in the refrigerator. Usually several farmers grow them in greenhouses, but Caeda’s are the first ones I have seen this year. 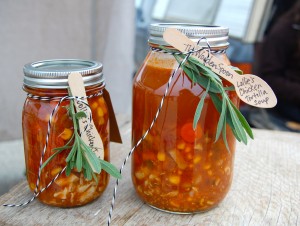 Fantastic Tortilla Soup from The Wooden Spoon (Barton and Bluebonnet) (Photo by Kate Thornberry)
I finally got to try The Wooden Spoon’s Tortilla Soup this week, and not only is it fantastic, it is better than my own home made tortilla soup. There, I admitted it, and yes, it hurt. The good news is: Now everyone can have fantastic tortilla soup in their freezer or icebox. The Wooden Spoon makes their soups and stocks from pastured chicken and beef, bought from the farmers and ranchers at the markets. Most people only get soup of this quality when eating at a chef-driven restaurant. 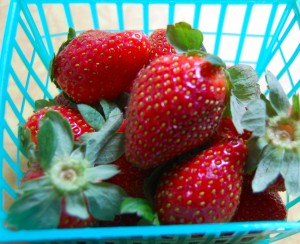 Strawberries from Markley Family Farm (Photo by Kate Thornberry)
As I mentioned last week, the very first of the spring strawberries are starting to arrive – and by “starting to arrive,” I mean there were just a few boxes last week, all of which were sold by 9:30 on Saturday. The STAR table had three boxes, and I got the very last pint from Markley Family Farm, who started out with less than ten. The one pint I got were so deeply flavorful that it made me understand why the Markleys are going in for strawberries this year in a big way (I remember being told that they were going to put about half their land into strawberries this year). Never have I tasted fresh strawberries that reminded me so much of strawberry jam. I wonder, is it the variety they are growing, their soil, or the weather? 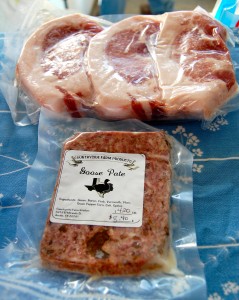 Fanned Pork Chops and Goose Pate from Countryside Farms at the HOPE Market (Photo by Kate Thornberry)
Countryside Farms (Downtown and HOPE) seems to be at peak production, with an enticing display of fresh, preserved, and smoked meats. Along with paper-thin slices of smoked duck breast, Countryside has a delectable Goose Pate, and plenty of pork chops. 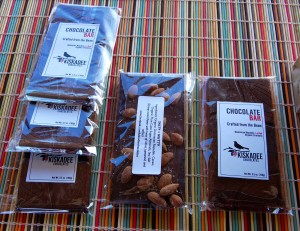 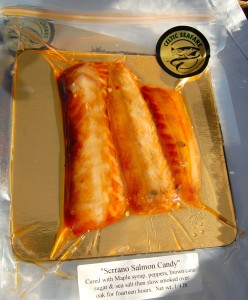 Serrano Salmon Candy (Photo by Kate Thornberry)
Celtic Seafare has been doing a fine business throughout the cold weather; once people try Sebastien’s smoked salmon, they are reluctant to spend their money on the inferior stuff. Even though I usually get to his table pretty early on a Saturday, he’s often close to sold out. One of his big sellers lately is Serrano Salmon Candy. It is a very sweet, smoky salmon, cut into bite size pieces for snacking. It is one of those amazing foods, like potato chips, that is difficult to stop eating once you start. Definitely a treat. 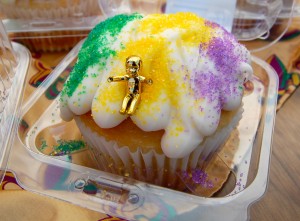 Individual King Cakes by Curious Confections (Photo by Kate Thornberry)
Over at the HOPE Farmers Market, Curious Confections is continuing to hone their products to beguile the public. Three of their current offerings certainly hit the spot with me: Pain au Chocolat, Jammy-Dodgers, and individual king cakes. Gemma will be baking both the plain and chocolate croissants on Sunday mornings right before the market. The Jammy-Dodgers and a variety of other treats will be rotating on a weekly basis, and the individual king cakes will be available throughout the Mardi Gras season. This Sunday, they will be bringing French Vanilla Ribbon Cookies, as well; one of their early staples that hasn’t been back in a while. 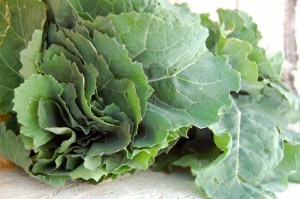 Green cabbage (Photo by Kate Thornberry)
After several weeks away from the Downtown Market, Dai Due will be back this weekend and serving the following menu:

Pork Sausage with Tangerine on a duck fat flatbread, with kimchi and curry ketchup;

Barbacoa Taco with cortido and cilantro;