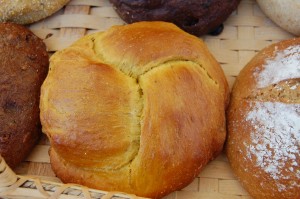 Gorgeous Butternut Squash Bread from New Bread Rising (Photo by Kate Thornberry)
The Farmers’ Markets last weekend were wonderful, with sunny skies and mild temperatures. This weekend promises the same. Saturday is projected to be a warm day wedged in between two cold fronts. 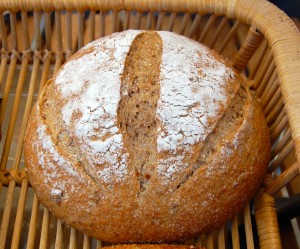 New Bread Rising's Sourdough Rye (Photo by Kate Thornberry)
New Bread Rising Bakery is back at the Barton Creek and Bluebonnet Farmers’ Markets, with several new loaves, including a light sourdough rye and a butternut squash bread. Their whole line of handmade breads are better than ever, due to an improved rising process, and the butternut bread is especially delicious. 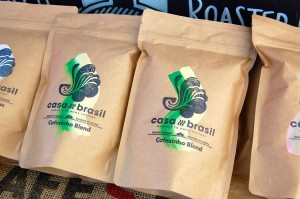 Casa Brasil's Dark Roast: Cafezinho (Photo by Kate Thornberry)
Every week Casa Brasil features a different coffee, and the featured coffee is the one they serve hot. This week’s featured coffee will probably be Cafezinho, their dark roast that has notes of dark chocolate, roasted almonds, and a hint of orange. 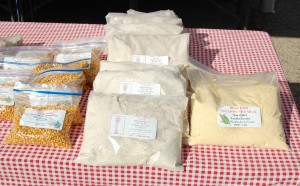 Richardson Farm's hand-ground meals (Photo by Kate Thornberry)
In last week’s roundup of “lucky foods” to eat for New Year’s Day, I wrote about cornbread and recommended using Richardson Farm’s organic, locally grown cornmeal. It wasn’t until that moment that I realized I didn’t have a photograph. Now I am supplying the want: shown are the heirloom yellow corn meal, the organic popcorn, and Richardson’s Whole Wheat Flour. As long as I can get Richardson’s, I don’t use anything else. 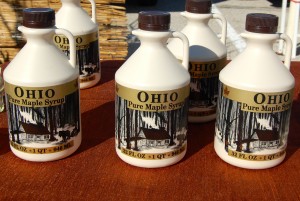 Big ol' jugs of maple syrup (Photo by Kate Thornberry)
There is now a second vendor of small farm maple syrup at our markets: Ohio Pure Maple Syrup. According to the fellow manning the booth at the Barton Creek Market, the syrup is made and jugged up by his family on their Ohio farm. There is no better market than Texas because, frankly, there is no local competition – sugar maples don’t grow here. The syrup will be for sale until his supply runs out.

Markley Family Farm has given us the heads-up that they will have a small amount of strawberries to sell this Saturday. That’s right, it is the beginning of the spring crops. They will sell out quickly, so get to the Barton Creek Market early if you are serious about getting some. 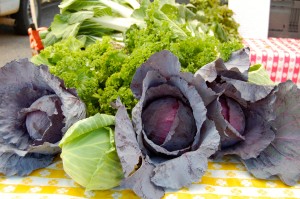 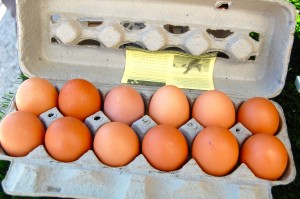 Vital Farm's jumbo pastured eggs (Photo by Kate Thornberry)
Last week I made all my Christmas cookies and fruitcakes with eggs from Vital Farms. They were wonderful; really huge, extremely fresh, and the yolks were uniformly a deep orange color. When I say really huge, I mean enormous; these babies are the size of duck eggs. 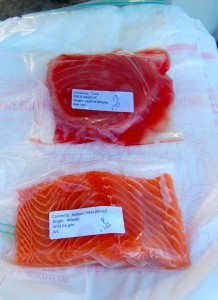 K & S Seafood's tuna and salmon (Photo by Kate Thornberry)
I often write about K & S Seafood, and the only visual I usually have is a picture of their sign. But last weekend, I asked if I could take pictures of the fish, even though I wasn’t buying any. Why didn’t I think of this before? There is a world of difference between reading something on a sign and seeing it. Just look at these tuna and salmon steaks. To see them is to desire them. 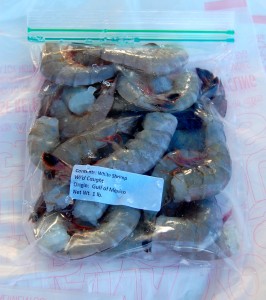 Firm, fresh, sweet shrimp from the Gulf (Photo by Kate Thornberry)
I broke down and whipped out my checkbook when I saw their shrimp. These found their way into a big batch of shrimp and grits, and they were fabulous. Just a day out of the water. I know it wouldn’t make any sense in the summer, but in the winter K & S could double their sales if they had a display; if folks could see how beautiful their seafood is, they wouldn’t be able to resist! 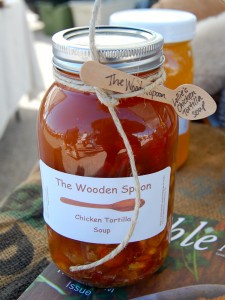 You've not had new potatoes until you have had freshly dug new potatoes (Photo by Kate Thornberry)
Red potatoes, Yukon Gold potatoes, sweet potatoes, onions, Brussels sprouts, carrots, cauliflower, broccoli, winter squash, red cabbage, green cabbage, kale, spinach, and lettuce are in abundance at all markets. In addition, most markets have greenhouse tomatoes, and some vendors at the Downtown Market has heirloom tomatoes that will astound you with their beauty and flavor.

Dai Due will not be at the Downtown Market or Mueller this weekend, but will return on Jan. 11.