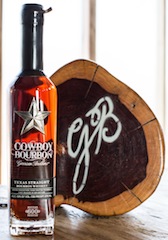 Garrison Brothers Distillery, the first legal bourbon whiskey distillery in Texas, announced this week that their Cowboy Bourbon has been named American Micro Whisky of the Year in the 2014 edition of Jim Murray's Whisky Bible, considered one of the world's leading whiskey guides.

"Medals from spirits competitions are almost always dubious at best,” says Dan Garrison, “and we've won plenty of them. But recognition from Jim Murray is unbiased and impartial.”

Over the years, Garrison Brothers has bottled bourbon from more than 900 barrels. Of those barrels, the ten best were held back to become Cowboy Bourbon, and only 600 375 ml bottles were produced. This is the first new bourbon that the Hye, Texas-based distillery has released since debuting their Texas Straight Bourbon Whiskey in 2010.

If you haven’t tasted Garrison Brothers’ Cowboy Bourbon yet, it’s not going to be terribly easy to find. Word is that Twin Liquors in Bee Caves has a few bottles to sell, but Garrison promises another batch will be available in 2015. Outside of Kentucky and Tennessee, Garrison Brothers is one of only a few distilleries in America that is successfully producing authentic, handmade bourbon whiskey. Founded in 2006, the distillery has sold more than 80,000 bottles statewide. Tucked away along Highway 290 between Johnson City and Stonewall, tours of the distillery can be made by reservation

“I am a religious reader of the Whisky Bible,” says Garrison. “His opinions are objective and even-handed. This means the world to me and my boys."