Nick Calandro moved to Austin in a hurry and opened his sandwich shop with equal speed. He then took plenty of time to get it right and get noticed in his relatively hidden location in Round Rock. Now, four years in, Pita Fusion, has hit a very steady stride, feeding hundreds of hungry folks everyday. 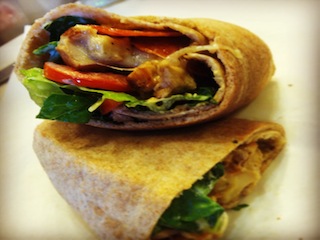 The Sicilian at Pita Fusion (Photo by Nick Calandro)

Handmade bread, delicious daily-made sauces with an emphasis on heat, and endless choices of combinations are the key here; plus Pita Fusion gets its sandwiches ordered, executed, and wrapped with an unusually-friendly style, once again, in a hurry.

Originally from Champaign, Illinois, Calandro was living in Utah in 2007 with a running list of places he wanted to move next churning through his twenty-something mind. One visit to Austin and he bought a house—on his very first trip. Most people find a job first, but he knew he wanted to be in Austin and what he wanted to do: open his own sandwich shop. A self-professed sandwich lover, he had the vision for Pita Fusion clearly in his mind. When he started the wheels in motion, “It was me, my brother, and a whole lot of fear.” Today, the idea of franchising into Austin is obviously the next step and Calandro says there is lots of interest.

The Calandro brothers took over a store front tucked back in a shopping center off Interstate 45 in 2009. (His brother has since moved on from the restaurant business, but was integral in the first steps.) Much of the commercial strip was empty when he opted in, but the space itself needed little build out to get started, the price was right, and there is a Dell Computers campus right across the highway. Pita Fusion simply focused on getting the product right and getting it into the hands of people, who are generally crunched for time, as quickly as possible. With a special, abbreviated language developed behind the line, once a sandwich is ordered, a crew of up to eight cooks can get it made in under a minute. “We were always food first,” he says. “And then came service and speed.” Long lines are now the rule during the lunch rush, but Calandro says people never wait long for their order.

The pita bread, a heavily-tested recipe that bakes in a 900-degree oven, is handmade everyday. It is far softer than most grocery store pita and therefore is able to wrap around the grilled meats, fresh veggies, and fire-y sauces with the flexibility of a tortilla. I tried The Sicilian, a mix of tender, grilled chicken, Genoa salami, and pepperoni which I chose to top with thick pickles, spicy peppers, onions, romaine lettuce, and the Mean Green Jalapeno Ranch. I have to say, having lived in Texas for nearly twenty years now, I’ve had my fair share of jalapeno Ranch dressings. Pita Fusion’s version is thick, very spicy, studded with fresh cilantro. Hands down, the best I’ve ever had. I found myself thinking back about The Sicilian in the following days, and the drive to Round Rock all of a sudden didn't seem very far at all. That was one trip-worthy sandwich.

As we sat in the shop and visited last week, most of the clientele lining up in the late afternoon were young, healthy, hip-looking folks who Calandro greeted with his easy smile. 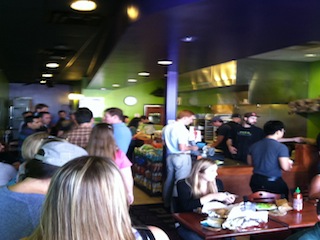 Lined up for lunch at Pita Fusion (Photo by Nick Calandro)

And on their way out, he’d inquire, “How was everything today?”

One said exactly what Calandro wants to hear every time: “Perfect as usual, man!”

Trust me on this one: make the drive and seek this place out now and then keep an eye out for the day Calandro's restaurants start popping up in Austin.