Beautiful young cauliflower from JBG (Photo by Kate Thornberry)
Cauliflower has arrived, just a few weeks behind the broccoli. Both white and cheddar cauliflower are drifting in, and the chartreuse Romanesco and regular purple varieties should be turning up soon.

Though the weather is going to be bitter on Saturday and Sunday mornings, the farmers and other vendors are likely to be there, because many had last weekend off. The Cedar Park Farmers Market and the Mueller Farmers Market were closed for Thanksgiving weekend, so those folks are going to be very motivated to show up, as they have two weeks worth of produce to sell. Though the rest of the markets were open, quite a few farmers and vendors took Thanksgiving weekend off individually. We won’t really know until we get there, but farmers can’t afford to lose half a month's income any more than the rest of us.

The one variable that could cancel the markets for many, however, would be icy and dangerous roads. Farmers and ranchers coming from the north and west will likely need to be cautious. If any of the markets send out notice of total cancellation, I will update the post. As of right now, however, most of the freezing precipitation is passing us by, so ice may end up being a non-issue.

Dewberry Hills Farm will be at the Sunset Valley Market this Saturday; at least, that is the plan. Amazing lettuce from Lily Pad Farm (Barton Creek) (Photo by Kate Thornberry)
I tried to write this very politely in my Farmers' Market Report preview, but here I am going to spell it out: Now that the first freeze has killed the bugs, the lettuce is really looking spectacular. I mean, it is breathtaking. And lettuce is only going to get better, sweeter, and bigger over the winter.

If only we could have tomatoes and bell peppers with our lettuce. What is that you say? There are several farmers who still have tomatoes, some who picked green ones, and some who are growing in greenhouses. Johnson’s Backyard Garden has tomatoes (all markets), Engel Farms has tomatoes (Downtown and Sunset Valley), Sand Creek Farm has tomatoes (Barton Creek). Sweet Bells from Markley Family Farm (Photo by Kate Thornberry)
When I wrote that bell peppers were over for the year, I made one mistake: I forgot about those folks who farm farther south from Austin, such as those who come here from south of San Antonio, even. The closer to the Gulf and the Valley, the less likely the frost. Markley Family Farm in New Braunfels had gorgeous red bells last Saturday (Barton Creek), and Flint Rock Hill Farm had red, yellow, and green bell peppers (Sunset Valley).

Another vegetable starting to show up at the markets is cabbage. I have seen quite a few large ones, both green and red cabbage. Kale is also going strong, especially the Dinosaur kale. These cold temperatures we are having this week won’t hurt the cabbage or the kale, as both are very cold-tolerant. Fresh pecans from Sand Creek Farm (Photo by Kate Thornberry)
This year’s crop of local pecans has been coming in over the last few weeks. In addition to Indian Hills Farm (Sunset Valley and Downtown) and Georgetown Pecans (Barton Creek), freshly cracked pecans can also be bought from Sand Creek Farm (Barton Creek). All of the locals are selling them for roughly $12 a pound. Microgreen basil from Bella Verdi Farm (Photo by Kate Thornberry)
When I mentioned last week that fresh basil could still be had from two of our hydroponic producers (Wild River Farm and Lily Pad Farm), despite the freeze, I didn’t realize that Bella Verdi Farm also has fresh winter basil in the form of microgreens. Over the winter microgreens are a really versatile option, and make an attractive addition to the plate. Bella Verdi Farm also sells mustard, broccoli, and Asian microgreens. 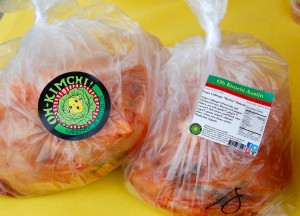 Rare Napa "Bechu" kimchi available only at the farmers' markets from Oh Kimchi (Photo by Kate Thornberry)
Kimchi Aficionados: There is a special kind of kimchi that is traditionally prepared and eaten within 24 hours, called “Bechu”. It is made from Napa cabbage, and is often for sale in Oriental markets in small plastic bags that hang behind the cash register. Oh Kimchi is now making very small batches of this special Bechu kimchi just for the farmers’ markets. Pure Beeswax Candles in many sizes from Austin Honey Company (Photo by Kate Thornberry)
Austin Honey Company not only has the most delicious honey-in-the-comb I have ever tasted in my life, they are also selling beeswax candles. Like in the olden days! I bought one for myself, of course, but these will also make wonderful gifts. Beeswax burns much longer than other waxes and smells great, and beeswax candles are truly fancy. Beeswax for your green home (Photo by Kate Thornberry)
But if you want to be plain and not fancy, Austin Honey is also selling bars of beeswax for polishing furniture (it is saddening to think about, because oh, so much work– but ladies used to wax hardwood floors with beeswax, too, in the Nineteenth century) I have heard that beeswax is the most awesome wax for antique woods; but did you know that is is great for polishing concrete countertops? More green uses for beeswax here. This is a really great gift: Texas Lavender (Photo by Kate Thornberry)
Quite a few farmers and vendors are putting out Christmas gift displays and special products, and the potters and jewelry makers are beginning their once a year sales vigil. Texas Lavender has put together these desirable gift packages of lavender lotion and sachets; I am not sure what variety of lavender they grow, but it is very intense and heady. I use Texas Lavender’s mosquito repellent in the summer, and not only does it work, it smells fantastic. You could freeze one pint of these habañeros and have enough for a solid year (Photo by Kate Thornberry)
As of last weekend the bush that bears these habañeros for 2 Happy Children Farm was still alive and bearing! I am pretty sure that isn’t going to be the case a week from now. Undoubtedly this will be the last weekend for these stunning peppers. Mango-habañero jelly with cream cheese and crackers (Photo by Kate Thornberry)
But that doesn’t mean that you will have to go the rest of the winter without habañero heat! J.J.’s Good Things most popular product has turned out to be this Mango-Habañero jelly. It is good with cream cheese and crackers (and other cheeses and patés), but it is sublime as a glaze for chicken, and as a dipping sauce for shrimp. J.J.'s Good Things: Mango-Habannero Jelly (Photo by Kate Thornberry)
Baguette et Chocolat, who sell their authentically French wares at the Sunset Valley Farmers Market, are one of my favorite bakeries; and when you buy direct, what a bargain! They make one of the best baguettes around, always light with chewy with a flaky crust, and it stays reasonably fresh for at least three days (some baguettes get rock-hard in a day). How much for this superior baguette? Two dollars! Baguette et Chocolat: Superior breads (Photo by Kate Thornberry)
Their Pain au Chocolat is the absolutely most perfect, and it is only three dollars. Croissants are only $2.50.