Visions of Edible Masterpieces Dance in Our Heads The historic Driskill Hotel (courtesy August Escoffier School of Culinary Arts)
The holiday season is upon us and that means Austin hotel pastry chefs and culinary students have been busy creating edible gingerbread masterpieces to get folks in the holiday spirit. Two of them debut this week, but don't nibble. 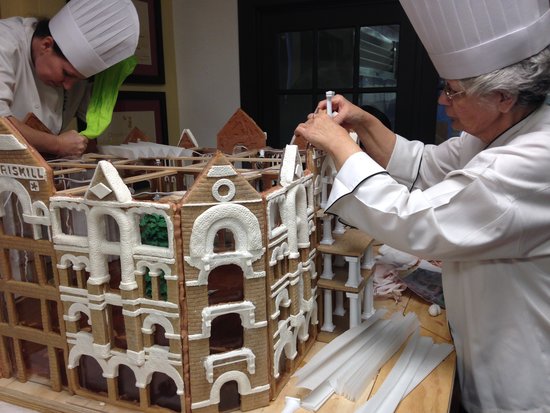 Escoffier students at work on the Driskill replica (courtesy August Escoffier School of Culinary Arts)
Guests who gather in the lobby of Austin's historic Driskill Hotel (6th & Brazos) for the annual tree lighting ceremony this evening will enjoy choral music, sweet bites, and cider. But odds are they'll marvel at, but not actually taste, another edible creation. For the past couple of weeks, a team of 11 culinary students from the August Escoffier School of Culinary Arts have been working on a gingerbread replica of the iconic hostelry, using more than 50 pounds of edible material to complete the task. The Driskill replica will be part of the hotel lobby's Christmas decorations for the entire holiday season.

As if that weren't enough gingerbread construction for one season, on Friday Escoffier students will deliver a European Gingerbread Village complete with seven buildings and snow to decorate the lobby at the Ronald McDonald House (1315 Barbara Jordan Blvd.). The village will be on display there throughout the holiday season, as well. Meanwhile, down at Austin's Four Seasons (98 San Jacinto) property, the pastry crew spent weeks in November creating the entire village of WhoVille from the Dr. Seuss holiday classic, How the Grinch Stole Christmas. The WhoVille re-creation went up in the lobby right before Thanksgiving and will be on display until New Year's Eve. As in the past, all the houses have been bought by sponsors (for prices ranging from $350-$650) to raise money for the Seton Shivers Cancer Center. 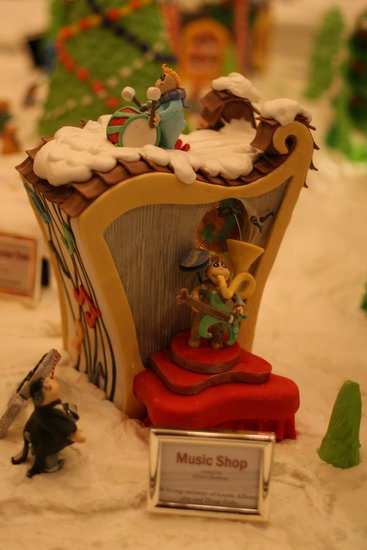 The WhoVille Music Shop (courtesy Four Season Hotel)
The Four Seasons is hosting open houses both tonight and tomorrow night to show off this year's architectural masterpiece. Pastry chefs will be on hand to answer questions about the construction of the village and guests can enjoy complementary hot apple cider and Grinch-themed treats.