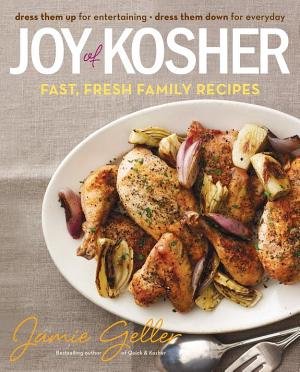 courtesy Wm. Morrow Cookbooks
Jamie Geller was famously the “bride who knew nothing” about cooking, but when she married into a religious Jewish family, she dove head first into learning the craft

Not only did Geller become a great home cook, she also turned her new passion into cookbooks, magazines, a website, and a TV show. Trying to feed your family and entertain guests is time consuming for anyone, but throw in five kids, two Shabbat dinners per week, and dozens of holidays, and Geller had to figure out a way to make entertaining easier.

Her latest cookbook, Joy of Kosher: Fast, Fresh Family Recipes, does double duty by showing how you can take one recipe and dress it down for your family or dress it up for guests to make entertaining, and life, a little easier. When I spoke with Geller about her new book, she explained the concept behind it.

“We work overtime and the recipes should as well. When we entertain it’s not the time to experiment. Take the recipes that are tried and true and dress them up.”

Though this is a kosher cookbook, anyone pressed for time can benefit from the techniques. Keeping kosher sounds tricky, but there are basics to follow: not mixing meat (red meat, poultry) with dairy (cheese, milk) and no shellfish or pork. If you are going to have a cheeseburger, Geller explained, it has to be a veggie burger with cheese or a real burger with soy cheese. Instead of bacon, Geller will use fried pastrami or “facon”. The recipes are not all Jewish; they range from Romania and Middle Eastern inspired dishes, to Italian and Argentinian.

Some standouts? Moroccan Chicken with Dried Apricots is a favorite in Geller’s house. She often makes chicken, and this one is a twist on the standard one-pot dish. The Pumpkin Ravioli with Brown butter is simple, yet delicious. “It feels gourmet, but is really simple. And then there is the dressed down version of Pumpkin Penne.” The Salmon Stuffed Avocado is another dish that looks decadent, but is easy, as well. It inspired by a restaurant Geller used to frequent in New York. This isn’t a cookbook for the aspiring chef, but is a good choice for a harried home cook looking to spice up their recipe repertoire. Throughout the book, readers can be inspired by gorgeous photos of food and Geller’s adorable family.

The tone of the book is colloquial as Geller shares family anecdotes, but is also a bit self-deprecating. Geller repeatedly says how she doesn’t like to cook, has “kitchenphobia” and at one point says, “Yes, I taste test every recipe. That’s why I look this way.” This attitude can either comfort or grate on the reader. Geller does use some shortcuts in her cooking, such as premade broths and packaged marshmallows, but is honest about the approach at her self-deprecating best. “I have five kids under eight, so I’m just happy to get a meal on the table. Using all natural broth works for me. I appreciate the finer things, but this works for my lifestyle.”

The author makes mistakes, too, and is willing to admit to them. She shared a story about the time where she tried to make a faster version of a popular Hungarian dessert. Not only did she ruin the recipe, but it took her four days to clean the kitchen. Not everything is meant to cook quickly!

Jamie Geller knows that the host sets the tone for the party. So if you are stressed and frantic, your guests will feel it. Geller helps make entertaining a little easier and more relaxed this holiday season with simple and impressive recipes.

Thanksgivukah 2013: How to Celebrate This Once in a Lifetime Holiday
Taste the historic convergence of Thanksgiving and Chanukah with our Brussels Sprouts Latkes

The Joy of Kosher, Jamie Geller